The protests in Yerevan showed little sign of slowing down, and they forced ruling party officials to move a meeting out of the capital. 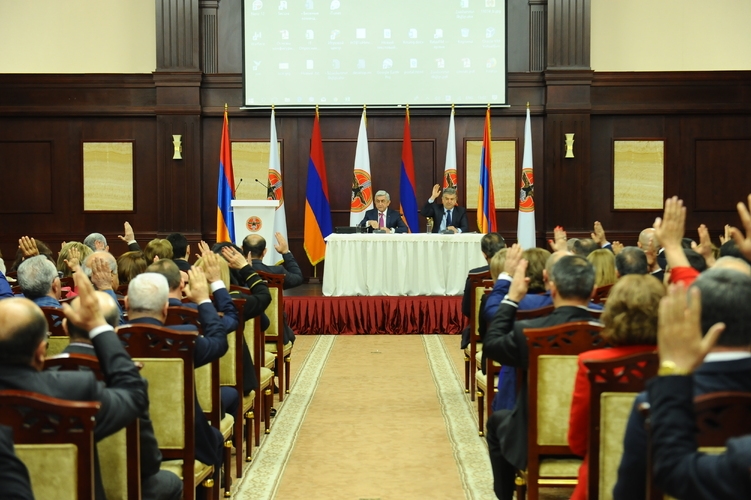 Leaders of Armenia's ruling party decamped to a ski resort as protesters in Yerevan have taken over central parts of the city in an attempt to disrupt longtime leader Serzh Sargsyan from continuing his rule.

Protests, which began on Friday, April 13, with an estimated 4,500 people, continued the following day with crowds that appeared roughly similar in size. Following the previous day's political speeches, Saturday's demonstrations had more of a carnival atmosphere: Traditional Armenian line dances were followed by hip-hop and pop music, interrupted from time to time with “Make a step, reject Serzh!” chants, which have become the slogan of these protests. Teenagers, young urbanites, and middle-aged Yerevan residents could be seen dancing side by side.

The demonstrations didn't go unnoticed by the ruling Republican Party of Armenia. Protesters had vowed to block the party's headquarters on April 14, where leaders were going to gather to formally nominate Sargsyan – until a week previous, the country's president – as its candidate for prime minister. Instead, the Republicans abruptly canceled the meeting in the capital and convened in Tsaghkadzor, a ski resort some 35 miles away from Yerevan. There, the faction unanimously voted to formally nominate Sargsyan for the PM’s office.

Sargsyan’s only potential rival from inside the party, outgoing PM Karen Karapetyan, enjoys a much higher rating than the ex-president. However, he never opposed the party’s leader and was the one to formally introduce Sargsyan’s candidacy. On a photo published on the party website, Karapetyan is captured sitting next to Sargsyan and raising his hand to vote “yes.”

On the same day, the ARF Dashnaksutyun Supreme Council of Armenia officially endorsed Serzh Sargsyan. ARF is Republican Party’s partner in the governing coalition, although it holds only seven seats in the National Assembly.

Being outfoxed by those in power, the opposition retreated to irony. “He was taken to Tsaghkadzor … Serzh Sargsyan was subjected to trafficking,” said Gyumri Municipal Council member Levon Barseghyan as he addressed protesters gathered in France Square, the central node of the demonstrations in Yerevan. Dropping the irony, he then called on all opposition forces to unite against Sargsyan’s prolonged rule. “I guess they can sort out other issues later,” he said.

Meanwhile, Nikol Pashinyan – the opposition MP who led the first day of demonstrations – kept making headlines. Joined by a group of protesters and the press, he stormed the headquarters of Armenian Public Radio on Alek Manukyan street in Yerevan. In the building lobby, they were met by police guards armed with assault rifles, and Pashinyan and supporters held up their hands in a sign of peaceful resistance. Security eventually let them through, and Pashinyan made it to the studio where he accused state broadcasters of ignoring the protests and demanded live airtime to call on Armenian citizens to join in.

The request was denied, and power supply to the building was cut. Nevertheless, sitting in dark studio surrounded by supporters and media, Pashinyan appeared triumphant. “This is what civility brings,” he said. The protesters eventually left the building and returned to France Square. Later in the day, the police issued a statement saying that Pashinyan’s action “may entail criminal responsibility.”

About 100 protesters had stayed overnight on France Square after the first day of protests, and an equal number did the same Saturday night, some sleeping in tents, others gathered around fires. As of Sunday morning, the Armenian police had made no effort of disrupting demonstrations, in significant contrast to the police's handling of mass protests in the summers of 2015 and 2016, when they dispersed crowds violently.

The mood among the protesters appeared celebratory. “I like it here, and I’ll come tomorrow at 6:30 pm again,” wrote Marine Mamikonian, a young architect who moved from Russia to Yerevan last year, in a text conversation with Eurasianet on Saturday night.

“I feel like this generation is a little bit bolder,” she said of the young activists driving the “Reject Serzh” movement. “So many people would never show up just because of Nikol [Pashinyan].”

“All the older people I know insisted I shouldn’t go,” she added. “It’s a different generation, really.”