The unique Islamic structures stand on the fringes of Georgian culture. 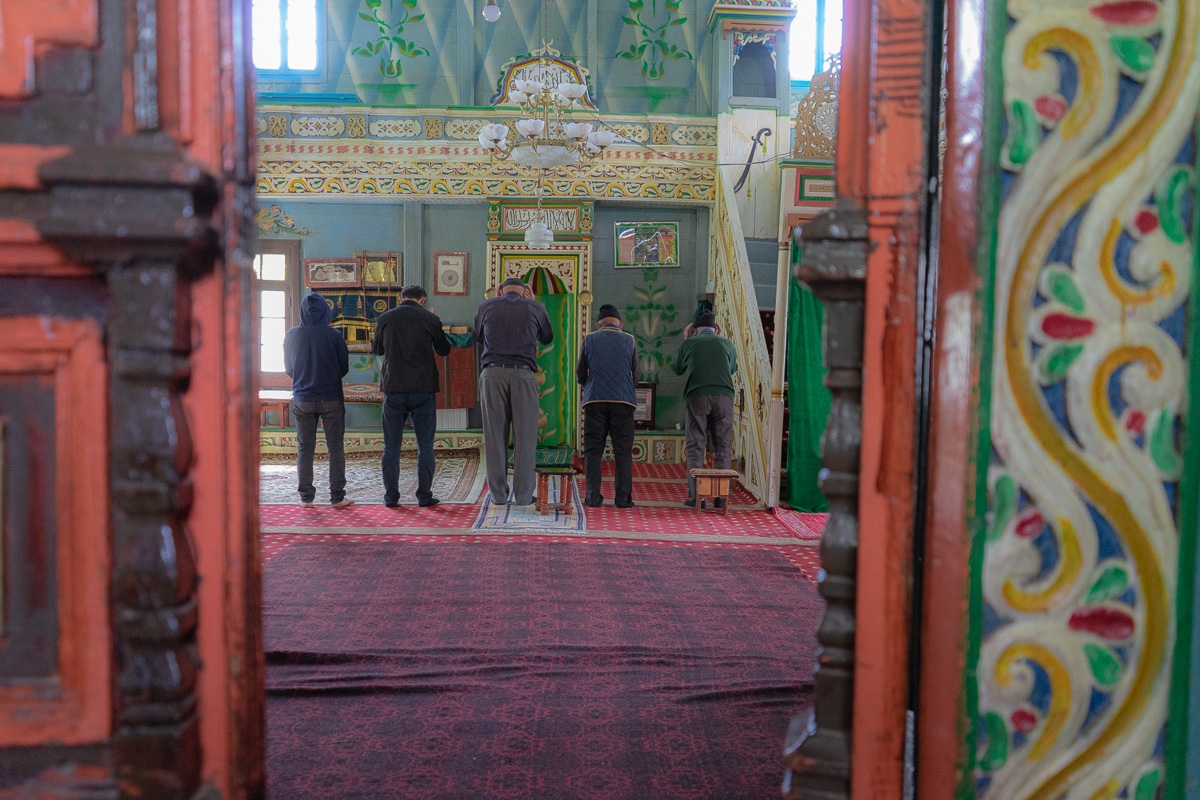 Inside the Agara mosque (photos by Avtandil Shervashidze/used with permission)

An unassuming wooden building in the Georgian hamlet of Dghvani looks more like a cottage than a house of God. Like many other mosques here, in the southwestern tip of Georgia, the façade is nearly indistinguishable from traditional, two-story wooden homes.

But the rustic, no-frills exterior hides a surprisingly cavernous, baroque world of elaborate ornaments and carvings. A dome painted with flowers hangs over an airy prayer hall; braided golden arabesques jostle along the balconies. Atop the mihrab, which worshipers face to pray, yellow flowers blossom on a blue tree. 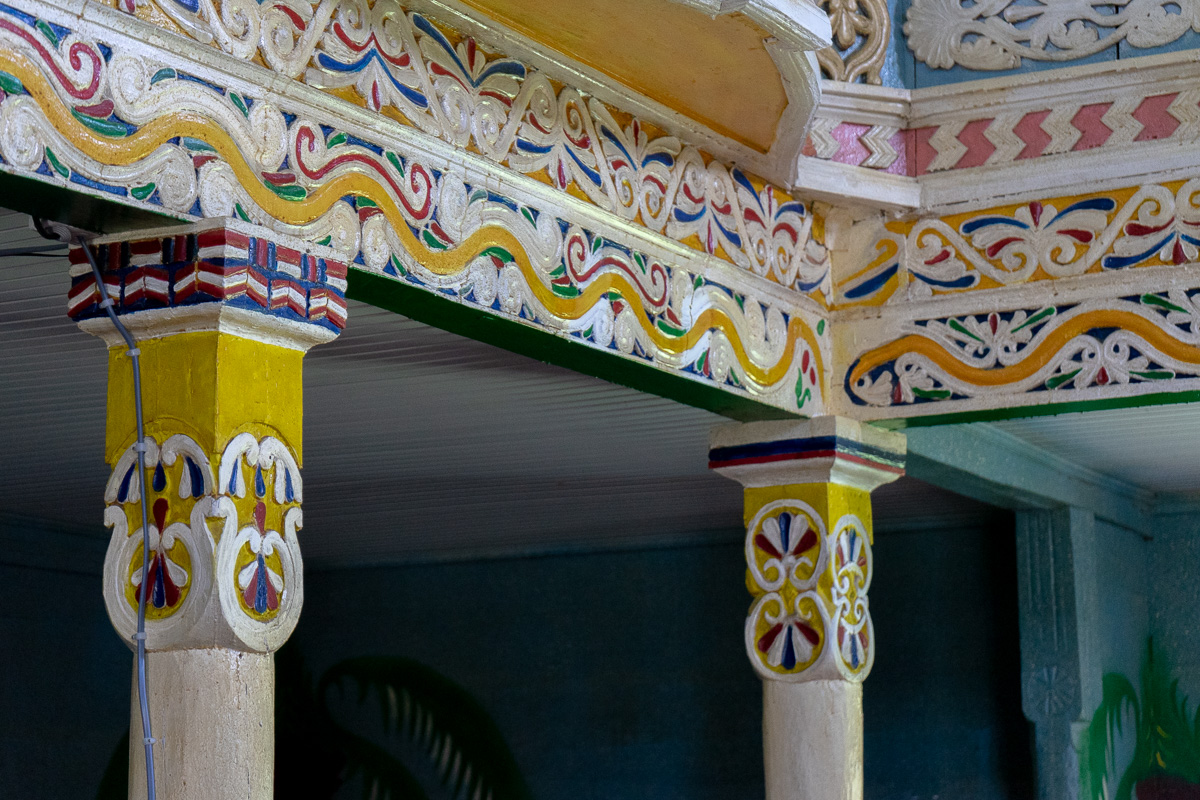 Such hidden gems dot the verdant slopes above Adjara’s Black Sea coast, a stone’s throw from the Turkish border. Some are still in use. In total, over 50 wooden mosques are found in this region. Many are protected in a cocoon of corrugated tin, hiding a kaleidoscopic world that some Georgians fail to appreciate as national treasure. 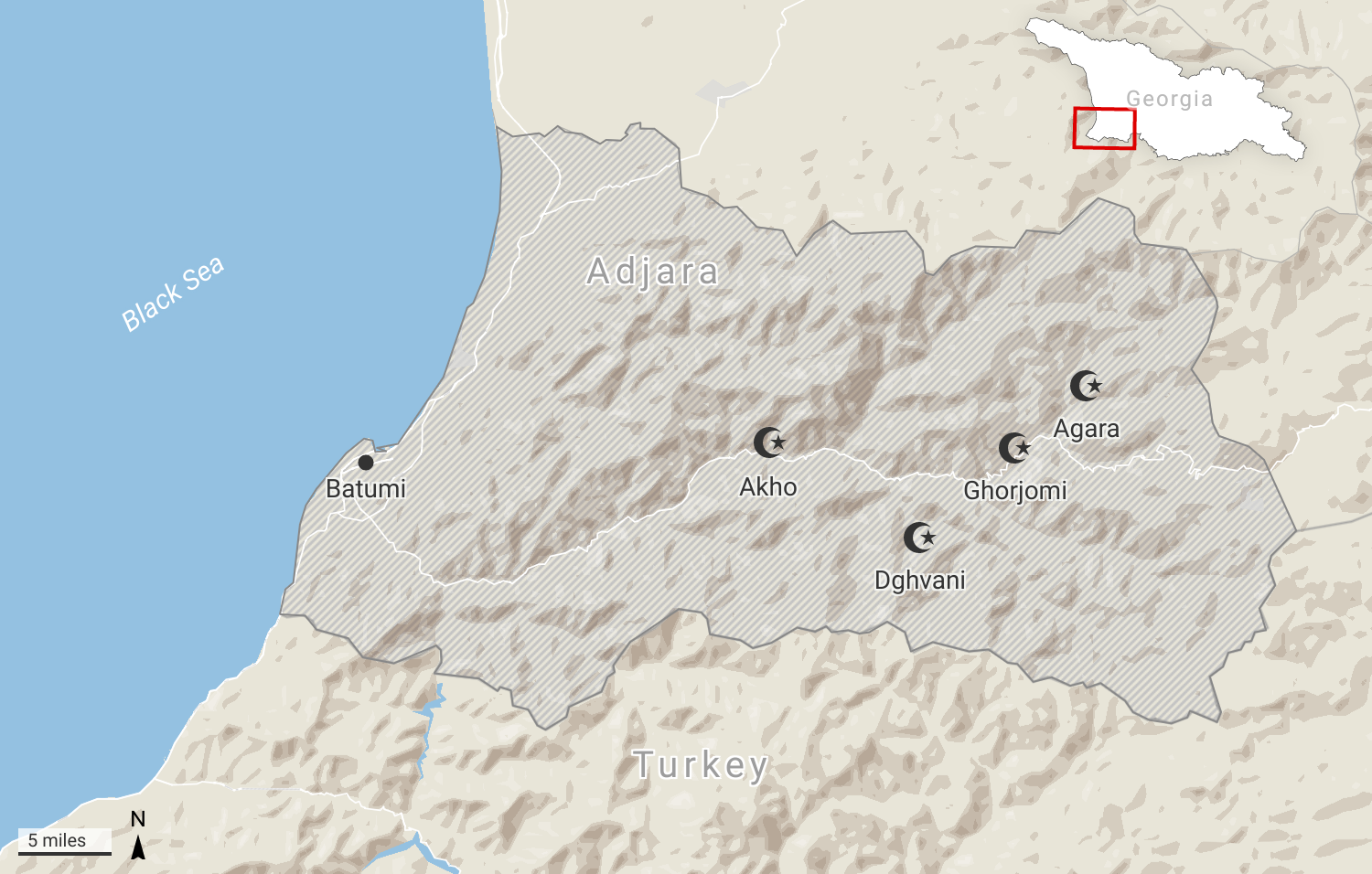 In Agara, the mosque interior is inspired by Adjara’s subtropical beaches. Stencils of palm and lemon trees adorn bright blue walls. In nearby Ghorjomi, the largest wooden mosque in Georgia sports a mural of an Ottoman steamship.

These unique structures, some more than 200 years old, exist literally on the fringes of Georgian culture – like most Islamic cultural heritage, underappreciated in the predominantly Christian nation.

“You won’t find most of these mosques marked as points of interest on tourist maps or featured on websites of local municipalities,” said Zaza Mikeladze, a coordinator with Solidarity Community, a group advocating for Adjara’s Muslims. “They are excluded from all key cultural and ethnographic itineraries of that part of Georgia.”

Many of Adjara’s wooden mosques are uniquely Georgian in style and design, however, and protected as cultural monuments. This includes the region’s oldest (1818) extant mosque, in the village of Akho. But much of Georgian society views the mosques, as well as congregations they serve, as a product of foreign influence.

“Islamic culture is largely viewed as foreign culture and this is part of the reason that most of these mosques are in a very poor condition and don’t get much national notice,” said Mikeladze, himself an Adjara Muslim.

Most of the mosques were built during Ottoman Turkey’s dominance over a region that saw its political and religious map changed many times during the centuries of imperial confrontations and the Georgian kingdoms’ own struggles for independence.

Ottoman influence led to a mass conversion of local Georgians to Islam in the late 18th century. This was followed by attempts in the 19th century, under the Russian Empire, to convert the population “back” to Christianity. Then the Soviet Union came along and repressed all religions altogether.

In the Soviet era, many of the mosques stopped functioning; some were used as storage facilities. Madrassas were closed and many Islamic religious practices were banned. Adjara’s “Muslim community has slowly become ‘invisible,’ reduced to oral traditions,” writes historian Ruslan Baramidze.

When Georgia gained independence from the Soviet Union, it emerged as a proudly a Christian nation. Orthodox faith returned as a powerful, ancient symbol of national identity. “The Georgian state chose the path of ethno-confessional nationalism and this stands in the way of accepting monuments of Islamic culture as authentically Georgian,” Mikeladze said.

Even though it dates back centuries, Islamic cultural heritage is still largely viewed as culturally extraneous here.

Adjara’s mosques were in fact built by Georgians for Georgians. The mosques’ curlicued interiors are the handwork of local Laz artisans. (The Laz speak a closely related language, but today mostly live in neighboring parts of Turkey). Grapevine-shaped ornaments, traditionally found in Georgian churches, appear in Adjara’s mosques as well.

Mikeladze’s group, Solidarity Community, is on a mission to preserve these mosques and promote them as cultural heritage sites. The group works with government agencies and media to draw attention to the buildings in an indirect struggle for Georgia’s Muslim minorities to be accepted as full members of Georgian society.

This story was created in cooperation with People in Need, a non-profit headquartered in the Czech Republic. People in Need provides support for the group Solidarity described in the story.