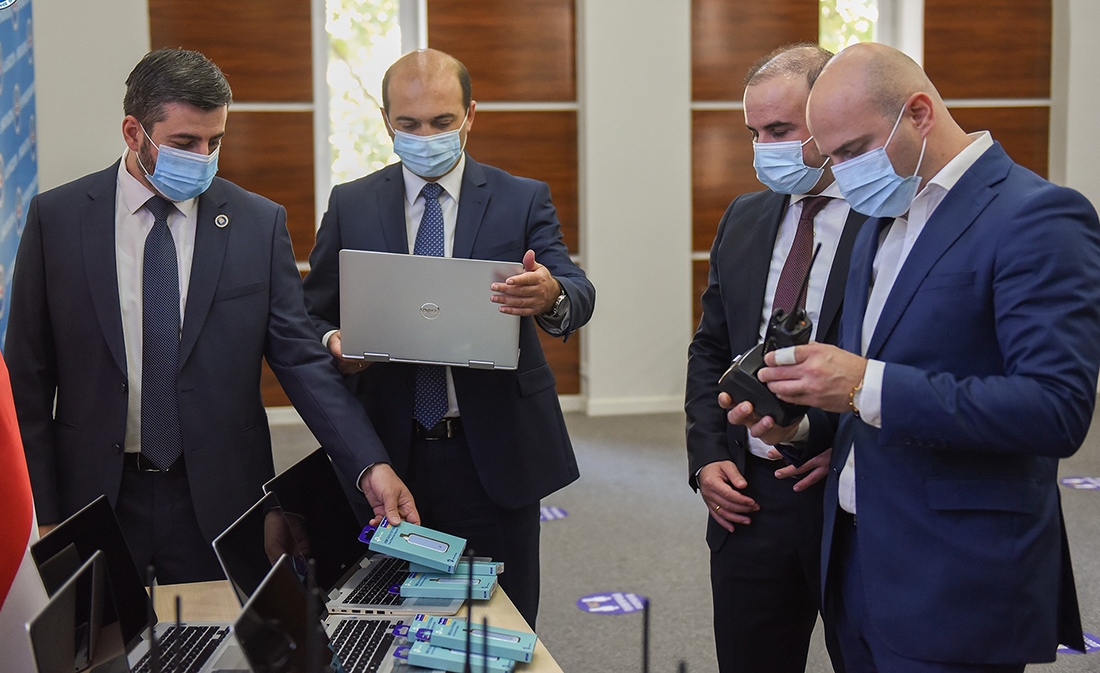 Georgian prosecutors say they are cracking down. (Prosecutor’s Office)

Giorgi, a student in his last year of university, does not see himself as a scammer. Liberal and politically engaged, his social media feeds are full of concern for the environment, labor issues, and social justice. He complains about poor state support for Georgia’s elderly.

But last year, he had a summer job at a call center whose business was to defraud foreigners, mostly from Europe and many of them elderly, via phone scams.

“My job was to find customers in Germany and convince them to invest in cryptocurrency,” said Giorgi, who agreed to talk to Eurasianet on condition of anonymity. “I would dial lots of numbers until I could get someone who would agree to listen,” he said.

Personable and fluent in German, he would carefully cultivate relationships with the “customers,” gaining their trust through small, successful investments. Meanwhile, other people at his company were using the information Giorgi gained to break into their bank accounts and steal their money.

He insists that when he started the job he didn’t know it was a racket, but eventually began to put two and two together. “I did realize that something like that was going on, people at the agency would suddenly tell me to stop all contact with a particular customer – I guess because they were taking some money from their accounts,” he said. “But I was never part of it.”

Except, he was. He was one of unknown scores of young, well-educated Georgians who acted as bait in the elaborate international phone scam schemes that have proliferated in Georgia in recent years.

The centers typically hawk cryptocurrency and virtual stocks to people in Europe, often robbing them of their life savings in the process. Georgia has acquired somewhat of a name for itself in the phone fraud business, with Georgian scammers cheating victims in Europe of millions of euros in the last couple of years, the authorities have said.

“Agents of so called call-centers were contacting citizens of the Federal Republic of Germany and other countries,” the Prosecutor’s Office said in a February 18 statement. “Using fake names and fake locations, they offered customers to participate in e-commerce involving the trade of stocks, equities, financial assets and cryptocurrency using an online platform they created.”

The callers from Georgia convinced their victims to deposit sums into designated bank accounts, purportedly for online trade, and then siphoned off the deposits to accounts in Georgia, prosecutors said. Five individuals were arrested in that case. Another nine were detained on similar charges in May.

Georgian police did not respond to Eurasianet’s request for detailed statistics of such crimes, but a spike in reported arrests suggests an upward trend. The prosecutor’s office also reported several crackdowns on such call centers in 2021, in which Israelis were reported to have been the masterminds.

Nevertheless, Georgian media have reported that many such schemes operate in the country. Since Georgia also is home to a significant number of legitimate call-center businesses, it is difficult to know how many are engaged in fraud.

Giorgi maintains a millennial cynicism about his summer job at one such call center – it was closed shortly after he left – and speaks about it as if it were a regular internship. “It was a job like any other, advertised openly online. It seemed aboveboard and it was not like the Nigerian prince thing,” he said, referring to the infamous advance-fee fraud that also has become known as the “419 scam.”

Despite his purported social awareness, he still plays down the fact that he abetted theft from so many elderly Germans. “Some investments did not work out, but I actually helped many of these people make money,” he said.

Many more lost money. In an interview with the Georgian network Mtavari Arkhi, one retired Briton recounted his ordeal of getting fleeced of his life savings by Georgia-based fraudsters who posed as cryptocurrency traders.

Convincing the man to repeatedly invest in cryptocurrency and carefully cultivating his trust for months, the callers stealthily gained access to his computer and online banking accounts, and eventually emptied his savings. “I was so embarrassed that I did not even tell my family about it for a year,” the victim said.

British police first looked for scammers in countries known as the usual suspects when it comes to such operations, but the tracks eventually led them to Georgia, he said.

Call-center fraud has grown into a serious problem for Georgia and its relationship with partners in the European Union. European embassies have raised the issue with the Georgian authorities, several European diplomats told Eurasianet on condition of anonymity.

Most of the recently reported crackdowns happened in close cooperation with German police, Georgian prosecutors said. German police did not respond to Eurasianet’s request to elaborate.

The issue has inevitably become politicized. Media affiliated with the political opposition have accused select Georgian government officials of sponsoring the sprawling scam. The government has hit back, accusing several opposition figures of involvement.

Giorgi does not rule out the possibility that the call centers might be under some high-profile protection. “I personally did not see any important people around there,” he said. “But then this business is not exactly undercover. I find it hard to imagine that the police didn’t know about it. They just probably didn’t care until someone complained in Europe.”