SCO Continues To Expand, But To What End? 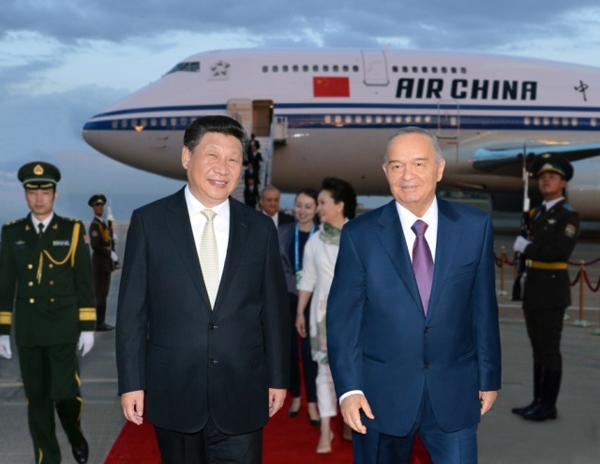 As the 15th summit of the Shanghai Cooperation Organization is set to start on Thursday in Tashkent, the group is poised to continue its growth, with two new members and five new partners. The group's purpose, however, remains unclear, with its diverse members apparently unable to agree on a consistent agenda.

The biggest headline after last year's summit was that India and Pakistan were invited to join the organization as full members, the first expansion since the group was founded. (The SCO currently consists of China, Kazakhstan, Kyrgyzstan, Russia, Tajikistan, and Uzbekistan.)

But on the eve of this year's summit, it's not clear what the timetable for their accession is. Their final accession should take place next year, Yuriy Ushakov, a senior adviser to Russian President Vladimir Putin, said. "The process of accepting India and Pakistan into the SCO will enter the final stage and we expect that at the next summit in Kazakhstan, India and Pakistan will be finally admitted into the SCO ranks," he said.

A senior Indian diplomat suggested that the timetable may be looser and hinted that it is dependent on the desires of current member states. “We need to work out what we need to do … As far as India’s pace of accession at the SCO being a function of Russia, China and the four countries of Central Asia, I would say we see ourselves as following fairly flexible multilateralism. So we are quite happy to engage in multiple processes. We have been working with other members of SCO on several other fields,” said the diplomat, Sujata Mehta, at a press conference Wednesday.

But one Chinese expert suggested that India and Pakistan would have to make significant progress in resolving their various disputes in order to be accepted as full members, suggesting a far longer timeframe.

"The enlargement process has been launched, so the two countries' entry is certain. But it will still take some time," said Li Dong, a researcher from the China Institutes of Contemporary International Relations. "If they demand to be real members, the India-Pakistan problems will have to be resolved, or at least be brought under effective control. If not, they can hardly be accepted soon."

Iran's accession to the group also likely will be discussed, as it is in theory ready now that it is no longer the subject of international sanctions. But a Kremlin official suggested that disputes remain among the members about whether Iran should be admitted "Currently, Iran is not sanctioned by the UN over the situation around Tehran’s nuclear program," said Bakhtier Khakimov, Putin's special envoy to the SCO. "However, there are some nuances, including bilateral disagreements in the approaches towards the procedure of Tehran’s accession to the SCO, so the question of the final decision on Iran remains open, but the work is in progress."

Somewhat more likely would seem the addition of new "dialogue partners" for the group. The SCO's secretary general, Rashid Alimov, said earlier this month that there were five applications submitted, but he couldn't name the countries: “We have five more applications for the dialogue partner status. I can only tell you that one application has come from Eastern Europe, three – from Middle East and another one – from Southeast Asia,” he said. A Russian expert predicted that the new applicants were Egypt, Israel, Syria, Laos, and Hungary. (Current dialogue partners are Armenia, Azerbaijan, Cambodia, Nepal, Sri Lanka, and Turkey; Afghanistan, Belarus, India, Iran, Mongolia, and Pakistan are observers.)

As for what this group of countries is going to talk about, it appears that there are differences of opinion. Judging from the statements made by government officials and think tank analysts of the SCO countries, China is primarily interested in expanding its One Belt, One Road economic integration initiative via the SCO. Russia has expressed its interest in linking up that Chinese project with its own Eurasian Economic Union, but the Chinese silence on the EEU issue has been conspicuous. Likewise conspicuously absent from anyone's predictions on the summit: the SCO Development Bank, which was supposedly one of the top agenda items at last year's summit but about which little has been heard from since.

This year's summit will be taking place in a markedly different atmosphere from last year's. In 2015, Russia made the summit (which coincided with that of the BRICS countries) a big public spectacle in an attempt to show the world that it didn't need the West. Uzbekistan -- probably the SCO's least enthusiastic member -- has taken the opposite approach, going so far as to entirely close its borders to its neighbors in the run-up to the summit, hardly in the spirit of regional integration.