SCO Says It Will Reward Iran For Reaching Nuclear Deal 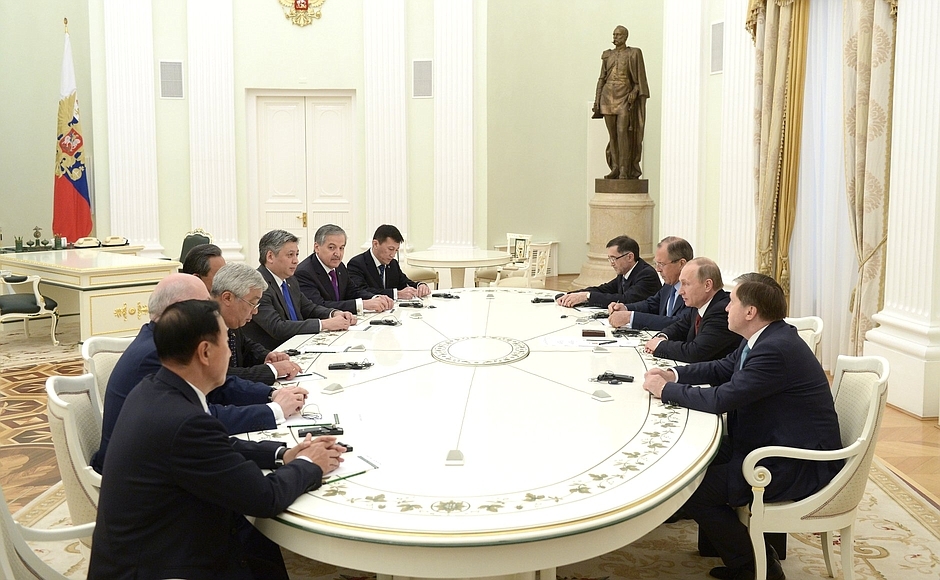 The Shanghai Cooperation Organization will "upgrade" Iran's status in the group if Tehran reaches an agreement with international powers on its nuclear program, Russia's foreign minister has said. Meanwhile, China is pushing for the organization to take a greater role in regional security.

The SCO foreign ministers met in Moscow this week in preparation for the July 9-10 summit in Ufa. It has been clear for some time that this would be an expansion summit, at least for India and Pakistan. Those countries are now observers, but have sought full membership for years. Speaking to reporters after the meeting, Russian Foreign Minister Sergey Lavrov said that: "If relevant decisions are made in Ufa, they will pave the way for the SCO’s extension, and India and Pakistan will have an opportunity to launch the initial procedures for joining the SCO."

The SCO now includes China, Russia, Kazakhstan, Kyrgyzstan, Tajikistan, and Uzbekistan. China has been the main driver of the organization, and in recent years it had taken on more of an economic role than the military or security role it seemed to aspire to when it formed in 1996. But the crisis in Ukraine has reenergized Russia's attempts to find non-Western allies, and since then Moscow given the SCO much more of its attention.

The greater drama with respect to expanding the organization will be around Iran, which also has been an observer with aspirations to full membership. And Lavrov confirmed previous reports that the SCO is explicitly tying progress on Iran's nuclear talks to SCO membership:  "We reviewed the application of Iran, which has actively taken part in the SCO activities as an observer state," he said. "We unanimously stood for upgrading Iran’s status in our organisation in the context of a comprehensive settlement of the situation regarding its nuclear programme."

In April, Iran reached agreement with the United States, Britain, France, Germany, Russia and China on a tentative framework for a nuclear deal; the countries are working to finalize the deal by the end of June. Lavrov said that while everything appears on track to meet that deadline, "it happens sometimes during the final stage of talks that this or the other side develops a temptation to 'bargain' a bit more at the last moment and this may aggravate the situation. For the time being, we are all moving in the right direction," he said. "According to the prevailing opinion during today’s discussion, we all want to upgrade Iran’s status in the SCO and it will be possible to do this in the context of a comprehensive settlement of the Iranian nuclear programme issue."

It's not clear exactly what an "upgrade" would be, but there is no level of membership between observer and full member so presumably the issue under discussion here is of full membership. The SCO has long said that Iran can't be a member until international sanctions (imposed by the United Nations as a result of Iran's nuclear program) are lifted; that has always seemed somewhat arbitrary, but anyway, if an agreement is reached by June 30 the sanctions would be lifted (though they could be quickly reimposed if Iran were to break the deal).

Iran believes the sanctions shouldn't be tied to SCO membership, its ambassador to Moscow said this week in an interview with Russian newspaper Kommersant. "It's unfair to link the question of Iran's SCO membership with the lifting of the sanctions," said the ambassador, Mehdi Sanaee. "But Iran, of course, is continuing negotiations with the six international mediators on its nuclear program, and I hope that they will be completed successfully and on time."

"The conception of the SCO corresponds with Iran's point of view on the issues of the regional and world order. Iran in its foreign policy is governed by two fundamental principles," Sanaee continued. "Firstly, Iran doesn't accept the idea of a unipolar world. Secondly, Iran is against any interference by outside powers in the affairs of the region. Regional problems should be dealt with by countries of the corresponding region. The essence and structure of the SCO fully correspond to these principles. And the successes of this organization -- as with the strengthening of the BRICS -- speaks to the fact that these principles are in great demand in the world."

Meanwhile, at the Moscow meeting, Chinese Foreign Minister Wang Yi said that the group should take on more of a security role. "Wang noted that in the face of the complicated global and regional situation, the SCO has the obligation and ability to play a more constructive role and make greater contributions to regional security and stability," Xinhua reported. "Wang also called on the SCO members to enhance their ability to maintain stability and to eradicate potential security threats in the region."

What does that mean? The most recent joint SCO military exercises were the biggest ever, reversing a recent decline. Will the SCO be taking on more of a military role, now with India, Pakistan, and maybe Iran included?