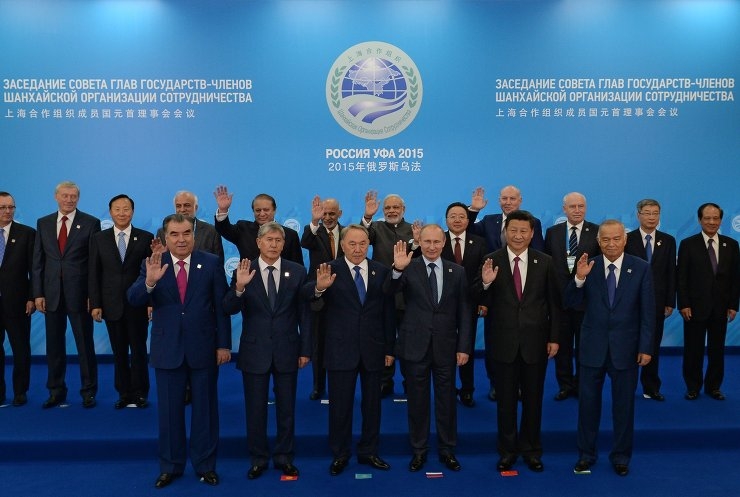 Heads of state of SCO member countries (in the front row) and heads of partner states and organizations (behind) at the SCO summit in Ufa, Russia, July 9-10. (photo: SCO)

The Shanghai Cooperation Organization has wrapped up its annual summit, and while the member states seemed to have failed to advance the concrete items they had on their agenda, they nevertheless adopted an ambitious strategy aimed at deconstructing the Western-dominated world order.

The summit was held in Ufa, Russia, on July 9-10, and as expected the big news was that India and Pakistan began the accession process. Somewhat more unexpected was the announcement there will be four new "dialogue partners": Armenia, Azerbaijan, Cambodia, and Nepal. And Belarus, which had been a dialogue partner, is now a formal observer, along with Iran, Mongolia, Afghanistan.

However, the accession of India and Pakistan may not be without its bumps: Uzbekistan President Islam Karimov said that adding them to the SCO will "change the balance of power" and should be discussed further. Karimov was speaking at a joint appearance with Russian President Vladimir Putin, who tried to brush the comment off with a sort of joke, Tass reported: "Islam Abduganievich, but how will it look: President Karimov of Uzbekistan brought India and Pakistan into the SCO and created a new political world reality,' Putin answered with a smile. 'Let's talk about it.'" Uzbekistan is now the chairman of the organization and next year's summit will take place in Tashkent.

It's also noteworthy that the final document of the summit made almost no mention either of the creation of an SCO development bank, or of somehow using the SCO to link the Russian Eurasian Economic Union project with China's "One Road, One Belt." Both of those were supposed to be top agenda items; presumably they were discussed, and possibly there was never any intention to come up with a concrete announcement, but it's curious that there was very little public discussion of either of them. In the final "Ufa declaration," there was one line buried on page 8 about "continuing discussions" on the bank.

In the final document, the SCO members did agree to fight extremism and work on transportation corridors together. It opposed the militarization of space and "unilateral" missile defense systems. It also called on member states to "strengthen cooperation on questions on forming a complex system of providing security in the information space, actively fighting against the dissemination of terrorist, separatist, extremist and other radical ideas by means of information-communication networks."

But a separate document, the "SCO Development Strategy Until 2025," was especially striking, taking direct aim at the notion of universal human rights.

SCO countries "respect the right to choose the path of political, economic, social, and cultural development taking into account historical experience and national characteristics of each state, promoting intercivilizational dialogue, peace, progress and harmony, governed by the principles of noninterference in internal affairs, respecting the sovereignty and territorial integrity of SCO member-states and not supporting the use of unilateral means of pressure without approval of the UN Security Council," the document said.

"SCO member states will cooperate on human rights, taking joint steps to overcome the atmosphere of politicization and confrontation in human rights discussions in international fora and observing the principle of equal partnership, respecting the cultural-civilizational diversity of the contemporary world," it continued.

Member states also agreed to promote the notion that "all kinds of human rights, including the right to development," should be respected. And they supported reform of the UN security council to make it "more representative."

All that is pretty vague, but compare that language to the world's current dominant human rights declarations, like those of the UN or OSCE (to which most of the SCO members are signatories) which emphasize the universal character of human rights, with no allowance for "cultural-civilizational diversity" or "national characteristics." This could end up being one of the most interesting and consequential directions that the SCO and other emerging non-Western blocs take.