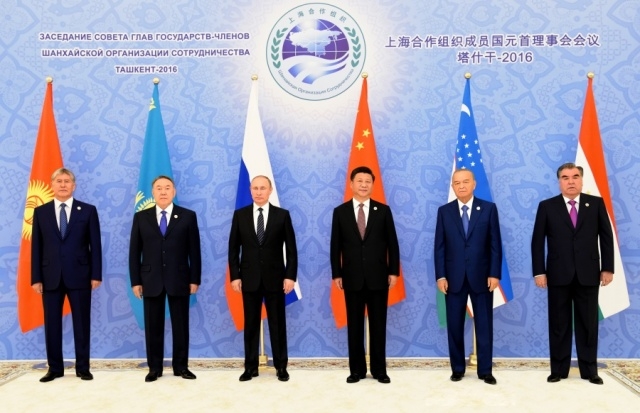 The heads of state of the SCO member states at their 2016 summit in Tashkent. (photo: president.uz)

The Shanghai Cooperation Organization's summit concluded with few concrete results and plenty of reminders that the group's members have different visions for where the would-be non-Western bloc should be heading.

At the SCO's 15th anniversary summit in Tashkent, there were plenty of vague declarations about the desirability of greater economic cooperation and stepping up the fight against terrorism, but no new initiatives as to how that might be achieved.

The concrete results of the summit were so meager that Russian President Vladimir Putin was reduced to touting the new SCO Youth Card, "which would offer students discounts on travel, accommodation, and visits to museums and other cultural and historical sites in the member countries."

The much-discussed accession of India and Pakistan as full members of the SCO progressed with the signing of a memorandum of obligation. "We hope that our partners will complete these steps as soon as possible, in time for our next meeting in Kazakhstan," Putin said in his speech. Putin also pushed for Iranian membership: "We think that now that the Iranian nuclear issue has been settled and the UN sanctions lifted, there are no obstacles in the way of a positive assessment of Tehran’s membership application."

But Russia appeared to be by far the most interested in quick expansion of the organization. China had already said that it wanted to focus on adding India and Pakistan before adding Iran, and it was hard to detect much Chinese interest in getting the South Asian states on board quickly.

As for the Central Asian SCO members, they also had varying opinions. Kazakhstan President Nursultan Nazarbayev said that India, Iran and Pakistan's accession would "expand the possibilities of our cooperation" and "reflect its growing authority." But his counterparts from Kyrgyzstan, Tajikistan and Uzbekistan in their respective addresses only neutrally mentioned that the Indian and Pakistani accessions were proceeding, and didn't mention Iran's at all, suggesting a lesser degree of enthusiasm.

Other fissures also were visible: while China promoted the idea of integrating its "One Belt, One Road" development program into the SCO, Russia instead pushed for the Chinese program to be integrated into Russia's own Eurasian Economic Union. Putin's focus on security, in particular with respect to Afghanistan, also was conspicuously greater than the other members'.

The results of the summit highlight the fact that "it is the Russians who are generally keen on membership, the Uzbeks who are hesitant and will try to block things, whilst the Chinese are hesitant but don't step forwards," said Raffaello Pantucci, Director of International Security Studies at the Royal United Services Institute, in an email interview with The Bug Pit.

"An expanded SCO is going to bump into some of the classic problems of multilateralism in Asia," said Evan Feigenbaum, vice chairman of the Paulson Institute and a former U.S. diplomat dealing with Central and South Asia, in an interview with Voice of America's Uzbek service. "First, when the group gets bigger the form drives function rather than the other way around. And second, when that happens, the group will grope around for a purpose."