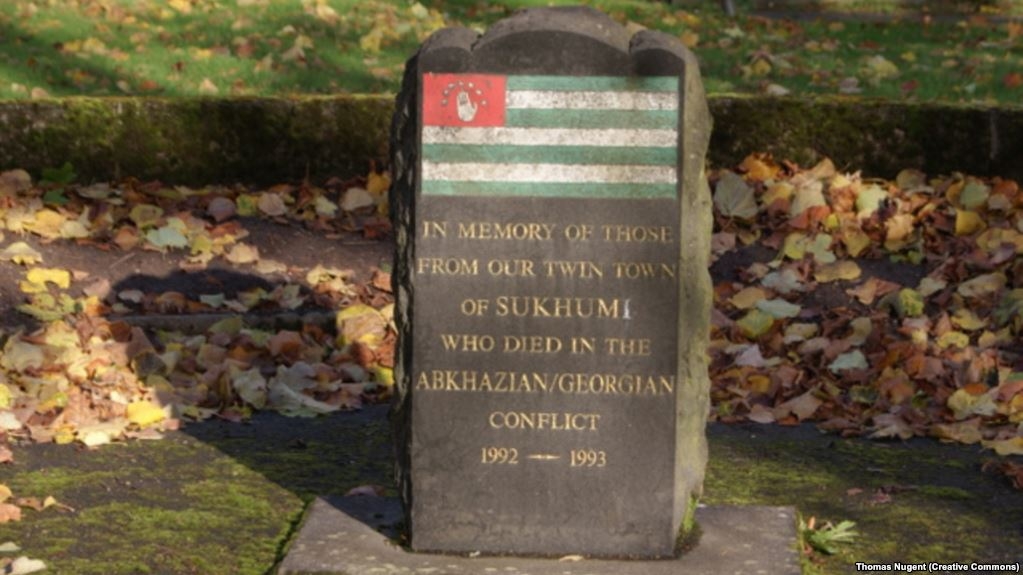 A memorial to Abkhazian war dead in Kilmarnock, Scotland, which has been targeted by the Georgian government but then defended by the town's council. (photo: Thomas Nugent, Creative Commons)

A Scottish town council has denied reports that it is removing a memorial to the victims of war in Abkhazia, a setback in Georgia's efforts to deny recognition to the self-proclaimed state.

In November, the town council of Kilmarnock, a small city south of Glasgow council said that it was removing a monument from 1996 inscribed: “In memory of those from our twin town of Sukhumi who died in the Abkhazian/Georgian conflict.”

The removal of the monument came after a formal complaint from Georgia’s ambassador to the United Kingdom, part of a dogged effort by Tbilisi to rub out any hint of international recognition of its breakaway territories, which are recognized by Russia and nearly no one else.

“One of the main tasks of the Embassy of Georgia and generally Georgian diplomacy is to use all means against the efforts of the Russian government to propagate the so-called independence of Abkhazia and South Ossetia,” the ambassador, Tamar Beruchashvili, said in a statement. In particular, Beruchashvili took offense to the Abkhazian flag adorning the monument.

Abkhazia was quick to respond; its de facto Foreign Ministry described Georgia’s reaction as an “act of vandalism,” comparing it with the destruction of its national archives at the hands of Georgian troops during the war.

To quell these “stirred emotions,” Kilmarnock’s city council took the unusual step of entering the sphere of international diplomacy.

“We believe in the principle of common humanity – the sentiment that we are all the same under the skin. Or, as we like to put it in these parts, we believe that 'we’re a’ Jock Tamson’s bairns,'” it said in a statement issued November 29.

The council noted that the monument was installed in 1996 as a “meaningful gesture of support and concern from one civic authority to another,” due to the fact Kilmarnock was twinned with Sukhumi at the onset of the conflict.

The statement also clarified the issue of the monument’s disappearance in the aftermath of the Georgian embassy's statement. According to Kilmarnock’s authorities, the monument was temporarily taken to a professional stonemason but would be restored:

[T]he Council hereby confirms its intention to restore the memorial to its original location, without any changes being made at this time, and to invite all parties who are minded to assist to engage in a meaningful dialogue with the aim of establishing a universally acceptable alternative wording and content, which the Council will then be pleased to put in place.

The Council added that it will install an information board next to the memorial contextualizing the conflict.

That way the memorial can continue to serve its intended purpose as an expression of remembrance and compassion towards all families of Sukhumi who lost their loved ones during the conflict, and perhaps also, looking forward, as a symbol to mark the conclusion of the current ongoing conflict resolution processes.

The Kilmarnock statement, expressing a dedication to harmony often in short supply in the Caucasus, ends by reciting Scottish national poet Robert Burns’ famous ode to international brotherhood, “A Man’s A Man for A’ That.”

“That man to man, the world
O’er,
Shall brothers be for a’ that.”