Selfies, social media and the absurdities of Kyrgyzstan politics

High-altitude heckling led to an unlikely reunion of one-time foes. 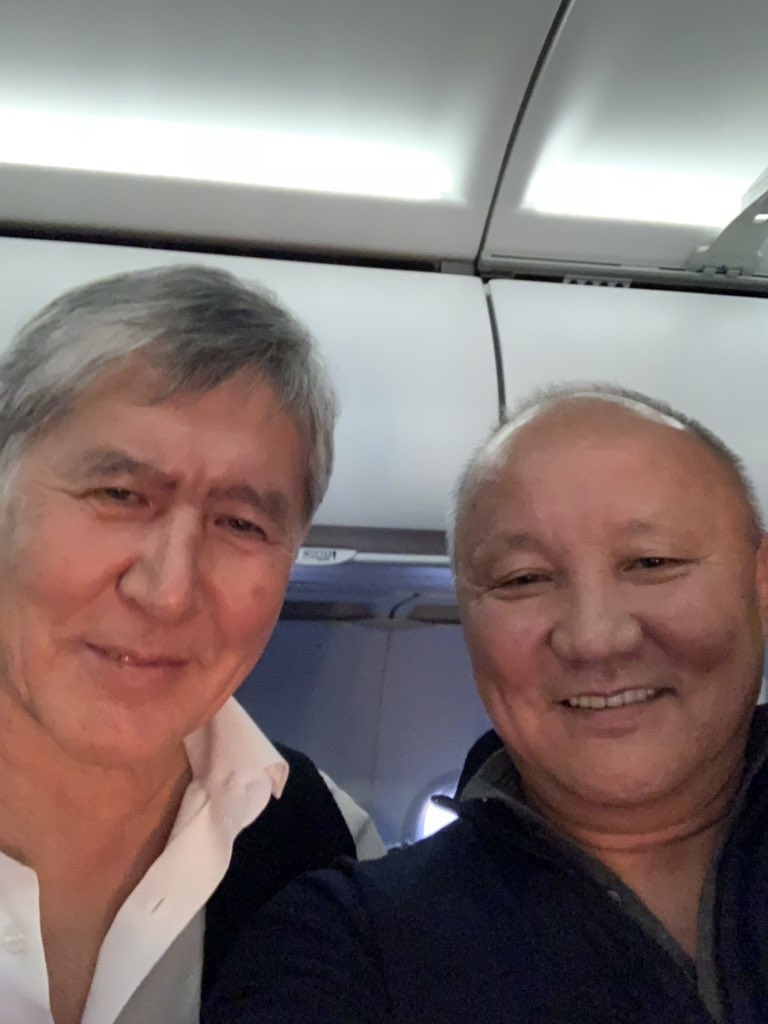 An unlikely recent episode of high-altitude camaraderie has served as a compelling vignette on the little absurdities that make for politics in Kyrgyzstan.

It unfolded on October 22 during an evening flight from the capital, Bishkek, to Moscow.

When ex-President Almazbek Atambayev, a politician currently negotiating choppy waters as a result of a sour confrontation with his successor, boarded the plane, his presence did not go unnoticed. A few seats away was Nariman Tyuleyev, a one-time Bishkek mayor who was sentenced to 11 years in jail on corruption charges under Atambayev, but was amnestied three years into his sentence.

The two men have history. In 2010, when the dust was settling on the violent uprising that toppled venal leader Kurmanbek Bakiyev, the pair were sworn enemies.

And when Atambayev consolidated his grip over domestic politics with a presidential election victory in 2011, Tyuleyev became one of his first targets. Tyuleyev was arrested in 2012 and then a whole lot of his family’s property was seized by the government.

While few questioned that Tyuleyev had enriched himself by opaque means under Bakiyev, it was also widely believed the anti-corruption investigation was tainted by politics.

Atambayev’s critics believe he too enriched himself while in power and there is a growing clamor for him to face justice.

As to which, Atambayev or Tyuleyev, is better off now — this is a matter of perspective.

Many things must have been weighing on Atambayev’s mind as he jetted off for Moscow, purportedly to attend a conference of Asian political parties about countering extremism.

His main concern might have been the fate his former driver-turned-political advisor and ultimate inner-circle figure. Two days before Atambayev took the flight, this erstwhile employee was being taken in the other direction in handcuffs, at the request of the Kyrgyz security services, who had put out a warrant for his arrest for alleged bribery offenses.

Ikram Ilmiyanov is now cooling his heels in a Kyrgyz detention facility.

Both of these developments appear to be consequences of a bitter fallout between Atambayev and incumbent President Sooronbai Jeenbekov.

Atambayev lent Jeenbekov significant political capital to help him win elections last November. Atambayev might have run himself, but the constitution allows for only one term. In return for this support, the outgoing leader had expected repayments in the form of lasting behind-the-scenes influence.

In March, when he sensed he had been short-changed and left out in the cold, Atambayev lashed out at the new president in his trademark irascible manner. He has been ruing his intemperance ever since as allies have been picked off one by one — either fired or thrown into jail.

The Social Democratic Party of Kyrgyzstan, or SDPK, which is on paper led by Atambayev, complained ahead of his trip to Russia that the ex-president’s state-allocated bodyguard complement had been reduced without explanation.

Meanwhile, prominent member of parliament is pushing a bill that would strip former presidents of immunity for crimes committed during their time in office. The MP has been quite clear that he has Atambayev in mind.

With all this going on, the last thing Atambayev needed was Tyuleyev heckling him in the tranquillity of the business class section of his flight to Moscow. Tyuleyev even posted a surreptitiously taken picture of Atambayev on social media.

“Apparently, after the arrest of (Ikramov), he has decided to flee,” Tyuleyev crowed on Facebook. “He is pretending not to hear, even though many people on the plane are speaking about him unflatteringly.”

Even Tyuleyev had to admit his heckling was “rude, harsh and uncensored.”

The Facebook post, and in particular the speculation in it about Atambayev leaving Kyrgyzstan for good, generated a flurry of social media chatter.

Edil Baisalov, a former politician and social media devotee who has relished kicking Atambayev while he is down, had already begun peddling this theory when news of Atambayev’s participation in the Moscow conference was announced. As soon as the Facebook picture surfaced, Baisalov began, for some reason, excitedly charting the course of Atambayev’s flight with an online flight tracker.

In a shock development a little while later, Tyuleyev posted a jolly-looking selfie of himself posing with Atambayev. The former president had responded to his catcalling with an invitation for a chat in the skies, the ex-mayor revealed.

During this three-and-a-half hour tete-a-tete, Atambayev denied responsibility for getting Tyuleyev put in prison and insisted he had no intention of leaving the country, according to Tyuleyev.

The ex-mayor’s followers were unimpressed: Hadn’t Tyuleyev once proclaimed he wouldn’t even share a public toilet with Atambayev? Was the selfie instigated by the consumption of vodka, the standard lubricant for peace talks in Kyrgyzstan? And most of all, wasn’t politics such a very dirty business?

Atambayev would know a few things about that. And he may now worry that if he does return from the Moscow congress, he won't have a party worth the name to return to.

According to one media outlet, a movement operating under the slogan “SDPK without Atambayev” is gathering steam and has found backing from Isa Omurkulov, another former ally of Atambayev who now leads SDPK inside the parliament.

Wheels down, buckle up your seatbelts, this flight is coming to an end and the landing may be bumpy.