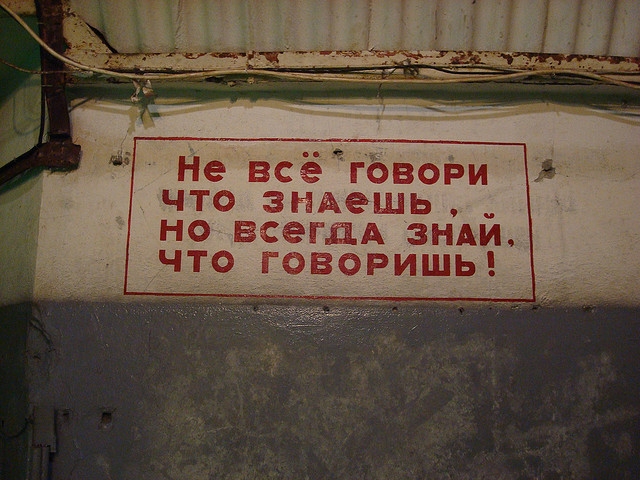 Sign reading "Don't Say Everything You Know, But Know Everything You Say," at a submarine base in Balaclava, just outside Sevastopol. (photo: The Bug Pit)

The city government of Sevastopol has proposed that Russia make it a Soviet-style "closed" city, which foreigners and even Russians living even in other parts of the country would not be able to visit.

On July 22, members of the Sevastopol legislative assembly formally appealed to Russian President Vladimir Putin and other Russian officials asking them to impose "restrictions on the stay of people not permanently residing in and not registered in Sevastopol." The annexation of Crimea to Russia earlier this year was accompanied by a remarkable degree of Soviet nostalgia, but the return of closed cities takes that nostalgia to an unexpected extreme.

According to the website sevastopol.su (yes, ".su" as in "Soviet Union"): "The initiators of the appeal are motivated by the fact that Sevastopol is the main base of the Black Sea Fleet of Russia and a factor of stability in the entire region, and so requires a special regime of secrecy and ensuring its security. The deputies believe that the unstable circumstances in the world and the fundamentally aggressive attitude of the Western community towards Russia can attract a host of provocative acts in Crimea and Sevastopol."

The article on sevastopol.su elicited a huge number of comments (644 as of the evening of July 24), most of which (according to my informal scan) were critical of the proposal. But a large number supported it, and curiously, many of the opponents thought that it was an attempt at pre-election populism -- acknowledging that it was a popular idea. During the Soviet Union, closed cities got priority in the distribution of consumer goods, which could be behind some of this enthusiasm.

It's not the first time the issue has come up: the city's governor Sergey Menyaylo was asked about the idea of making Sevastopol a closed city, and he rejected the idea. "There are things to see, things to show, and those are two components of an open city...No sort of ZATO [Soviet acronym for a closed city], I'm fundamentally against that. We shouldn't go too far, we need to behave rationally," he said.

"The enemies are sharpening their knives and bayonets... saboteurs are sneaking towards Sevastopol," drolly noted Mikhail Voytenko, the editor of the web journal Maritime Bulletin, in a blog post on Echo Moskviy. He pointed out the irony of Russia regaining Crimea only to propose it be closed to all other Russians. "To the credit of Sevastopolians, many of them have objected to this idiocy. But far from all. To the discredit of Sevastopolians, so many of them warmly greeted this proposal. They don't at all understand how offensive this is for all the other citizens of this country, which they wanted to join so badly, and for which they proclaim their love with such passion."

So far there seems to be no comment from official Moscow on the proposal.