Leaders of Armenia’s more traditional opposition, including the former ruling Republicans and the venerable Dashnaks, came out to support the anti-liberal activists. 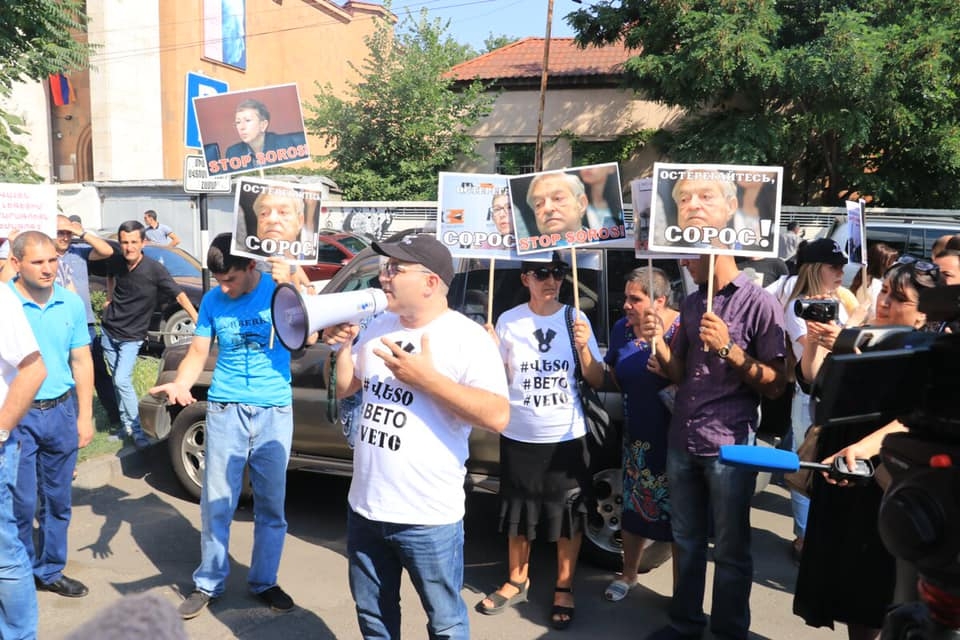 Narek Malyan, center, leads a protest against the Open Society Foundations in Armenia in July 2019. On January 28, 2020, Malyan and several allies were detained (photo: Facebook, Veto)

Several leaders of Armenia’s far right groups have been detained on various charges. It was unclear what prompted the police to carry out the coordinated detentions of the activists, who have been keeping up a small but noisy and constant harassment of the government.

Special forces police officers on January 28 detained Narek Malyan, the founder of the group anti-government group VETO. The detention was filmed and posted on Facebook by Mihran Hakobyan, a former member of parliament for the old ruling Republican Party of Armenia. “A new wave of repression,” Hakobyan wrote.

As supporters headed to the police station, police detained several more of them. They included the leader of the allied group Adekvad, Artur Danielyan, whom police stopped in his car on the way to the station.

Police soon after issued a statement saying that Malyan was detained on suspicion of possession of illegal weapons. Ruben Melikyan, a former human rights ombudsman of the Armenian protectorate of Nagorno-Karabakh who is now supporting the far-right activists, initially said his client had also been detained on weapons charges, but when Danielyan was released he said the charges were drug-related. The police did not announce any charges against Danielyan, but said another Adekvad member, Kostantin Ter-Nakalyan, was detained on weapons charges.

Among the crowd of Veto and Adekvad supporters who appeared at the police station were several members of Armenia’s more traditional opposition, including Armen Ashotyan, a senior Republican Party member, and Artstvik Minasyan, a member of the executive body of the Armenian Revolutionary Federation – Dashnaktsutyun.

All the detainees were released quickly.

Several complained they were treated roughly. Ter-Nakalyan, who runs the tabloid news website blognews.am, said police forced him on to the ground and handcuffed him, and compared his treatment to that of a man who days before had opened fire in a business center associated with former president Robert Kocharyan. That suspect was taken into custody without handcuffs, Ter-Nakalyan said.

The activists, particularly Malyan, have been carrying out a months-long harassment campaign, mostly on social media, against the government and its liberal supporters, particularly the local office of the Open Society Foundations (OSF), financed by George Soros. (Eurasianet receives funding from OSF New York.) The group has coined a new word in Armenian, “Sorosokan,” to describe OSF supporters and beneficiaries.

The previous weekend, during a marathon press conference, Pashinyan had touched on the campaign against Soros, noting that many of its leaders had ties to the former, Republican-led government. “Today, all those who are speculating about this topic were either in the former government or close to it. Why didn’t they close” the OSF office, he told reporters.

Hours before his detention, Malyan had posted on Facebook that the head of the National Security Council, Armen Grigoryan, was a “Sorosokan” and complained that the latter had celebrated Armenia’s Army Day (marked on January 28) by using a quote by the American general George Patton, who Malyan said was anti-Russian.

Following his release, Malyan accused the government of acting under pressure from the head of the OSF office in Yerevan. “I have information that Larisa Minasyan had a rather harsh conversation with the Prime Minister and demanded that they stop our activities in Armenia.” OSF officials are scheduled to hold a press conference on January 29.

In June 2019, police also arrested several Adekvad activists, including Danielyan, days after Pashinyan had made a thinly veiled threat against the group.

Ashotyan, the Republican leader, wrote on Facebook that the detentions were an attempt to silence dissent. “It is very indicative that, on the day of the Armenian Army protecting us from foreign enemies, these authorities continue to stoke internal strife, fight against their own state and kidnap Narek Malyan. You can not silence dissent using these methods,” he wrote. (Ashotyan did not mention the Republicans’ long record of extralegal arrests and harassment of political opposition members during their time in power.)