Skeptics say the roundup is a show meant to create the illusion of fighting corruption even as higher-level officials remain untouched. 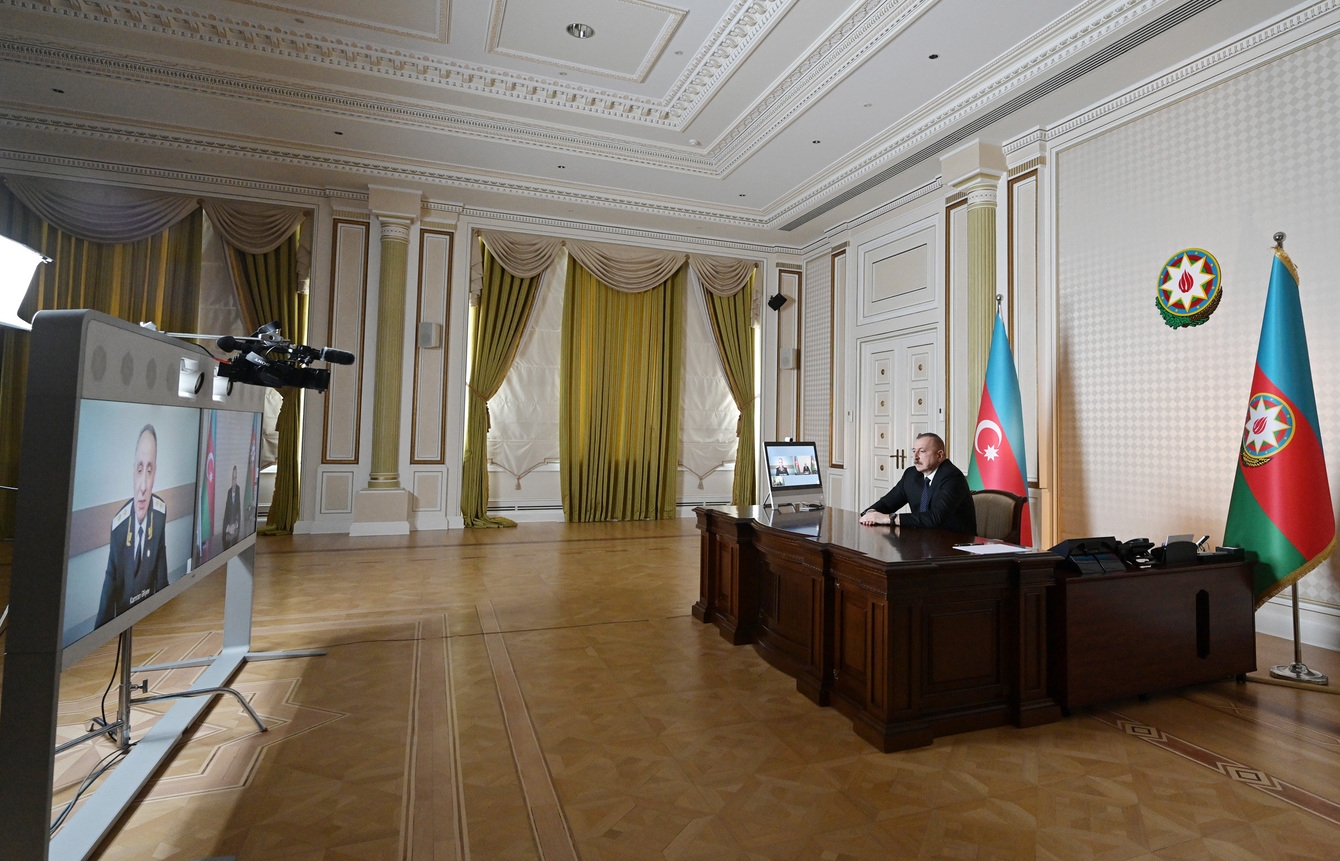 Azerbaijan President Ilham Aliyev speaks via videoconference with the country's prosecutor general on May 1, following the arrest of a district head on corruption charges. (photo: president.az)

The Azerbaijani authorities have been rounding up local officials accused of corruption. Among the alleged crimes: improperly giving out permissions to leave home amid a strict COVID-19 stay-at-home regime.

On May 4, Azerbaijan’s Prosecutor’s Office announced that it had carried out operations around the country against six local officials. All six have been charged with illegally issuing exemptions to the country’s electronically enforced isolation rules. Two were additionally accused of stealing food aid from the state-run charity, the Heydar Aliyev Foundation, intended for poor Azerbaijanis.

Those arrests followed the April 30 arrest of the head of the Bilasuvar district, Mahir Guliyev, on charges of embezzlement, abuse of power, and bribery. And on May 5, another district head – Vilyam Gajiyev, from Imishli – was arrested. At the time this post was published it was not yet known on what charges.

It's not clear what prompted the spate of arrests, but independent observers have followed the news skeptically.

“[P]eople are less surprised by the fact that the official committed these crimes than by the fact that they were arrested,” wrote local news website Jam News following Guliyev’s arrest. “Municipal chief executives (especially in the provinces) are seen as overlords who almost always abuse their authority but are rarely held responsible. The trend of holding them accountable for their actions is a relatively recent development.”

The independent news agency Turan noted that it was relatively low-level regional officials who were getting busted, in spite of plenty of evidence that central government officials were probably engaged in the same crimes on a greater scale.

“It is noteworthy that the Prosecutor Office continues to ignore high-profile scandals involving senior officials and members of the government who steal millions,” Turan wrote. “So, publications about corruption of former and current ministers, about their acquisition of multimillion-dollar real estate objects abroad, firms and companies and other business, for some reason remain without attention of the authorities.”

It is also worth noting that the showy roundup of local officials has coincided with a conspicuous increase in media fawning over the leadership of President Ilham Aliyev including, but not limited to, a Soviet-style public letter-writing campaign.

Together, it has suggested an attempt to promote a good-tsar-bad-boyars narrative as public discontent with the government – already serious before this crisis – has been exacerbated by the state’s inconsistent response to the coronavirus outbreak and the prospect of hard times resulting from dropping oil prices.

Aliyev announced that he is personally taking charge of complaints from a number of Bilasuvar residents who say that their former district chief stole land from them.

And one MP suggested that law enforcement officials in the several districts under investigation also should be punished, because they didn’t inform Aliyev of the problems.

“They should have immediately informed the relevant organs and the head of state about the illegal activities in the regions,” the MP, Siyanush Novruzov, told the state news agency APA. “If these reports and information had reached the head of state in a timely fashion, the situation wouldn’t have gotten to this point.”