Drought and construction have contributed to the worst dust storm in Uzbekistan’s recorded history. 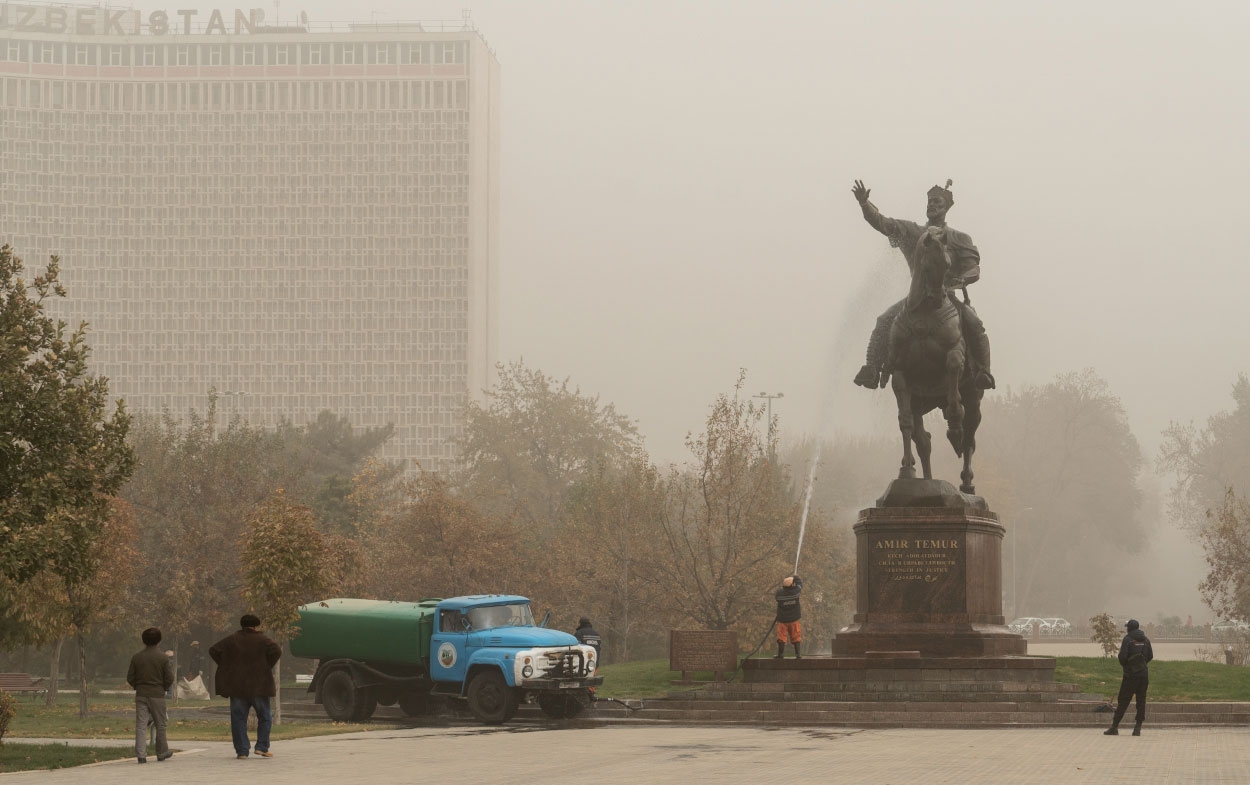 Tamerlane gets a bath. (Andrey Kudryashov/Fergana.media)

A severe sand and dust storm – the worst since meteorological records began – has struck Uzbekistan.

On the evening of November 4, a haze engulfed Tashkent and most other areas, with the exception of the most northerly region, as a cold front swept in and a strong wind blew sand and dust across the country.

“Under the influence of gusts of wind, the parched upper layer of soil rose up, creating the effect of a dust and sand haze, with a deterioration in visibility to 100-200 meters in a number of districts in the country,” Uzbekistan’s meteorological service, known as Uzgidromet, told Gazeta.uz.

It also confirmed a popular belief that Uzbekistan’s construction boom had exacerbated the situation.

“Of course, large-scale construction works, which are under way in many regions of the country, made their contribution to the emergence of this phenomenon, inasmuch as they generate very large amounts of gritty materials.”

The dust storms, which started in southern Kazakhstan, were most severe in Tashkent and the southern Syrdarya Region, and Kazakhstan’s Turkestan Region, Uzgidromet said.

Dust storms are frequent in Uzbekistan. In 2018, a cataclysmic storm engulfed the region of Karakalpakstan with salt left behind when the Aral Sea dried up.

“However, usually volumes of sand and dust that are raised into the air disperse and settle on the ground soon after the wind drops,” Uzgidromet noted.

In this case, a mass of cold air prevented this from happening. Instead, an inversion layer formed, in which temperatures stop falling with elevation but rise instead. This is a meteorological condition that contributes to smog.

Because of this, “a phenomenon unusual for our region arose – a dust haze,” Uzgidromet explained.

This sand and dust storm was the first of its kind since Uzbekistan started keeping meteorological records 150 years ago.

Uzgidromet said it would persist until November 6.

“It looked foggy outside but that was dust haze,” a resident of Tashkent told Eurasianet. “I started feeling dust in the air outdoors, though there was no strong wind. Some time later, I smelt dust indoors, though the windows were tightly closed.”

By 9 p.m. on November 4, the concentration of dust in Tashkent’s air was 30 times the permitted level. The next afternoon, it was still 10 times over. Ambulance services around the country received 4,000 calls seeking help for respiratory problems.

The authorities provided some extra-tender care to one well-known figure, judging by a photo posted online.

It showed workmen hosing down the statue of national hero Amir Temur (Tamerlane) in Tashkent, the landmark Hotel Uzbekistan looming out of the haze behind him.