Several activists and politicians have been branded “traitors” on government-linked social media after they expressed their opposition to Azerbaijan’s recent attacks against Armenia. 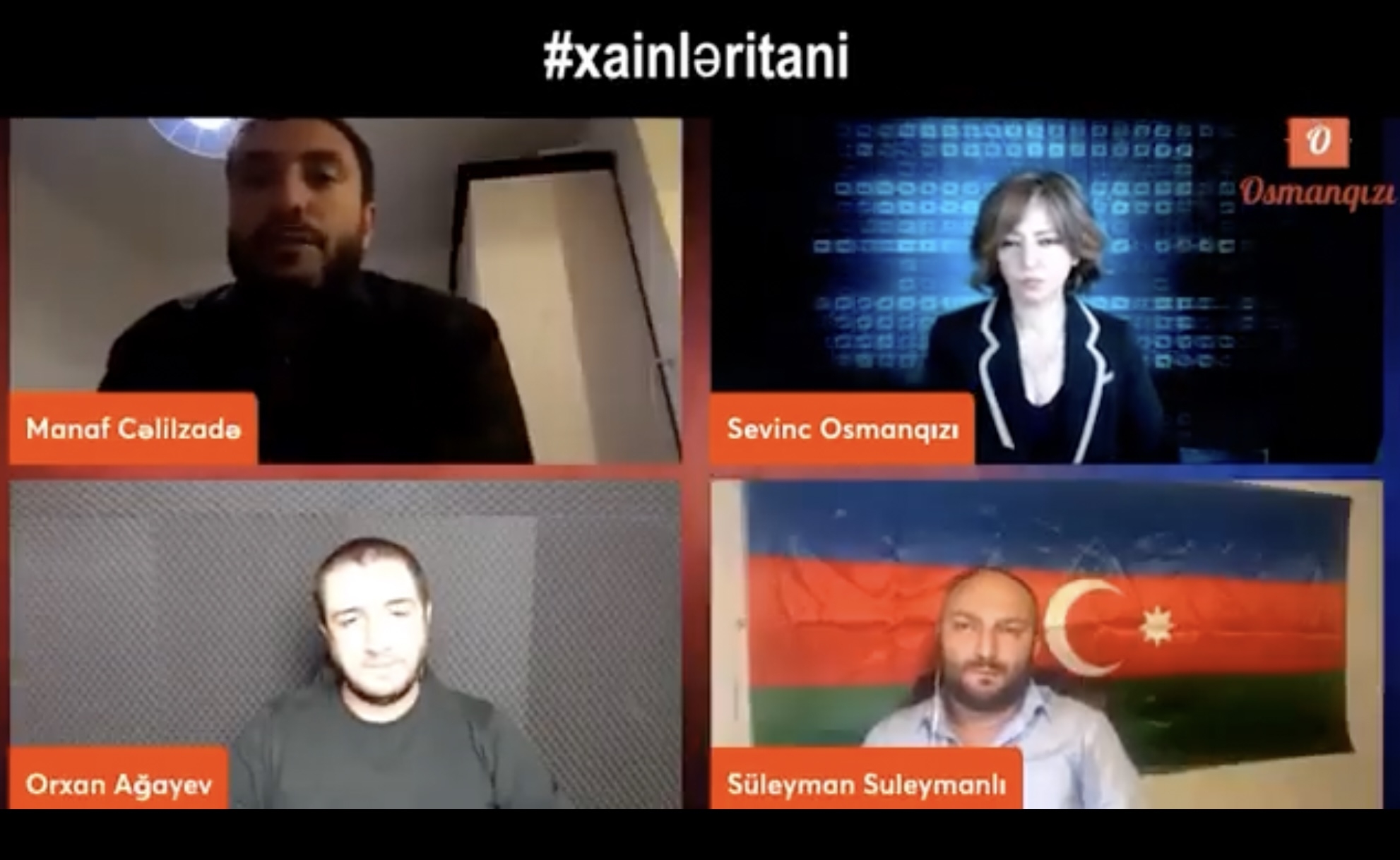 Government-linked social media accounts have attacked anti-war voices in Azerbaijan with a campaign branding them as “traitors.”

After Azerbaijan’s unprecedented attack on targets inside Armenia starting on September 12, many opposition voices in Azerbaijan came out in opposition, questioning the morality and legality of the Azerbaijani offensive. It was a conspicuous shift from 2020, when the same figures supported the government’s campaign to take back much of the land in and around Nagorno-Karabakh it had lost to Armenia in the first war between the two sides in the 1990s.

While a ceasefire was agreed on September 14 and has for the most part held, government-linked social media did not stop their assaults.

On September 17, the youth wing of the ruling New Azerbaijan Party (YAP) published a video compilation of various opposition bloggers and politicians who had expressed opposition to the new round of fighting. It included the hashtag “#xainləritanı” or “know the traitors.”

Those targeted in the video, most of whom live abroad, for the most part argued that Azerbaijani forces entered Armenia’s internationally recognized borders and that that was both immoral and strategically unwise.

“The Azerbaijani side openly acknowledges their intention to invade another country’s territory,” Germany-based journalist and former political prisoner Afghan Mukhtarli said in an interview that was excerpted in the YAP video. Azerbaijan “is crossing Armenia’s internationally recognized border and is crossing into a new war,” blogger Tural Sadigli, who also lives in Germany, said.

“Why do we have to fight on the Armenia-Azerbaijan border while there are separatists [in Nagorno-Karabakh], and move forward on to Armenia’s territory?” asked journalist Sevinj Osmangizi in the video. “What does it accomplish? What kind of logic is it?”

The “know the traitors” hashtag was taken up on Facebook and Twitter, with many of the users members of YAP or branches of the party, including some members of parliament.

One popular post featured images of many of the same people as in the compilation video, their photos stamped with the phrase “know the traitor.”

While the Azerbaijani government claims that the fighting was started by Armenia, which provoked the Azerbaijani attacks, they have provided no evidence for that claim. The level of skepticism for that narrative inside Azerbaijan is unprecedentedly high, and many dismissed or mocked the “traitor” campaign.

“Perhaps they are soon going to post these [images] on the street,” wrote political activist Rustam Ismayilbayli on his Facebook page. He compared the situation to the purges of the early Soviet Union. “1937 has passed in the calendar, but the 1937 spirit – the tradition of declaring opposing opinions as traitorous, spying, denunciations – still fully lives with us.”

On September 20, Ahmad Mammadli, chairman of small opposition group Demokratiya-1918, was detained by plainclothes police officers and his whereabouts are not known. Mammadli lately attracted attention for his anti-war posts on social media.

Azerbaijan President "Ilham Aliyev will definitely answer before international courts one day for the crimes he committed not only against the Azerbaijani people, but also against the Armenian people,” Mammadli wrote on Twitter. “The first task of democratic Azerbaijan will be to punish those who make nations hostile to each other." One user responded that he was going to report Mammadli to law enforcement.

Later in the afternoon of September 20, Mammadli was arrested for 30 days and charged with disobeying police orders, he reported in a video filmed by a fellow group member and posted to social media. "If I am a criminal for speaking about peace, I am proud of it," he says in the video.

This post was edited to add details of Mammadli's arrest.