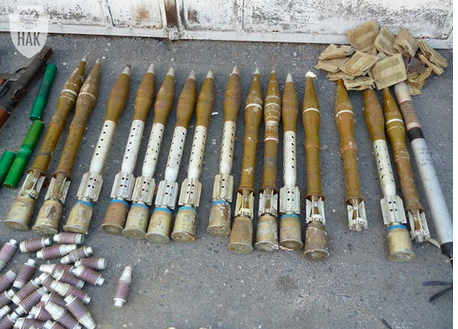 An arms cache that Russian and Abkhazian security forces said they discovered in 2012, part of a plot to attack the upcoming Winter Olympic games. (photo: Russian Antiterrorism Committee)

A swathe of Abkhazian territory will be included in part of the large "security zone" being set up in advance of the Winter Olympics taking place in Sochi, Russia, next month. Starting today, anyone entering the zone will have to produce documents to police, according to a report by the Abkhazian news agency Apsny (and translated into English by civil.ge).

“[A] stationary checkpoint” will be established at the village of Bagripshi on the edge of the 11km zone, which will be manned by officers from the Abkhaz security service, interior ministry and migration service.

At this checkpoint the officers will be authorized to check identification cards of persons entering into the extended ‘border zone’ or heading towards the Russian border, as well as to inspect vehicles. Abkhaz law enforcement officers will be carrying out round-the-clock patrols in the villages falling within the zone, according to the decree.

This is a previously unannounced expansion of the already very extensive security zone that Russian security forces have imposed around Sochi. Security fears have mounted as the games approach; Islamist groups from the North Caucasus have vowed to attack the games and last month carried out suicide attacks in the city of Volgograd.

In 2012, Russian and Abkhazian security officials said they had found a cache of arms that were purportedly to be used for an attack on the games. Russia then accused the Georgian government, in league with North Caucasus militants, of organizing the alleged attack. But the new Georgian government has tried to cooperate with Russia on Sochi security, drawing rare praise from Russian President Vladimir Putin.