When the USSR collapsed, Georgia’s tea industry went with it. Now investors are bringing it back. 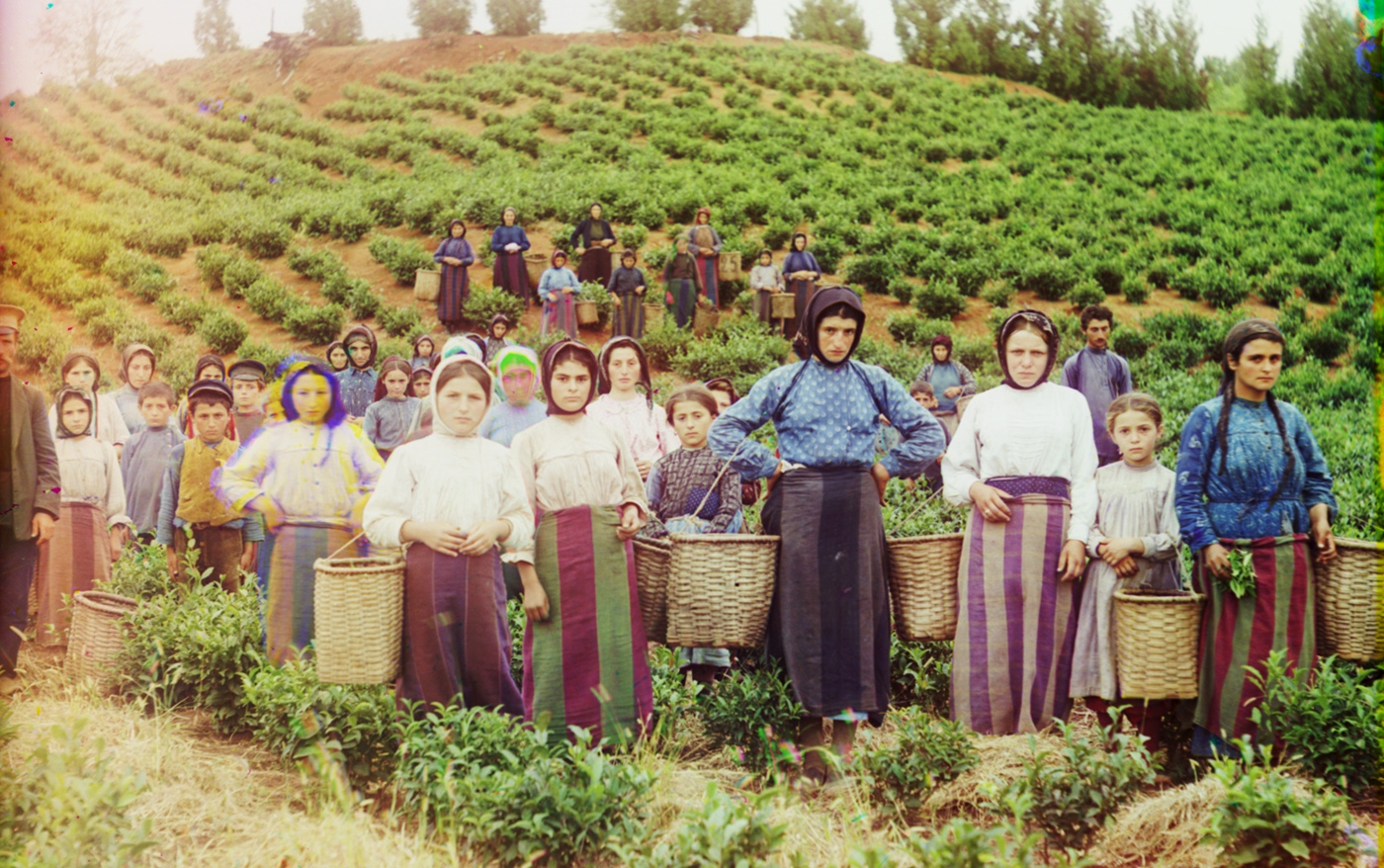 “Tea,” our friend Lasha indicated with a head nod, driving past fields with rows and rows of overgrown, chest-high, bushes of green leaves. It was 2002 and we were zipping along a skinny road littered with potholes on the outskirts of Zugdidi in west Georgia, but we could have also been in Guria or Adjara or even Imereti; regions with tea fields that have also become agrarian relics.

Later we visited the last operating tea factory in town, a Soviet-era rust bucket of a building that Lasha said churned out leaf dust that was sold to Lipton. Such was the fate of an industry that had once provided the USSR with 95 percent of its tea. However, after decades of inaction, Georgian tea production is slowly making a comeback.

While Georgians have been drinking herbal concoctions from time immemorial, tea as we know it is believed to have first arrived in the early 19th century when Prince Mamia V Gurieli began growing Camellia Sinensis in his botanical garden. But it was another prince, Miha Eristavi, who smuggled seeds from China and established the first tea plantation in 1847. His presumption that west Georgia’s climate was ideal for the green and black plants was spot on.

In 1864, Eristavi traveled to St. Petersburg, eager to share his pickings at the All-Russian Agricultural Exhibition, but was unable to get state support for his enterprise. Although thirsty for the drink, the Russians wouldn’t take Georgian tea production seriously for several more decades.

A Russian tea merchant, Konstantin Popov, made the first serious investment in 1892 and set up tea plantations on about 300 hectares in the Adjaran village of Chakvi. He enlisted Lau Dzhen Dzhau, a Chinese tea specialist from the Zhejiang province, to set up the foundations for modern Georgian tea production. Their tea earned a gold medal at the Paris World Expo in 1899 and became a hit with the Russian royal family, but it was the Soviets who would undertake the mass cultivation of tea in Georgia.

The 1950s were the golden age of Georgian tea, as the state weaned itself off imports and created more plantations, developed harvesting machinery and high-yield hybrid varieties resilient to low temperatures. By the mid-1980s, Georgia was the fourth largest tea exporter in the world with 60,000 hectares bringing in a whopping 152,000 tons of tea. The downside was that the USSR never placed quality over quantity, while tea standards had become measured in strength, rather than taste.

When the USSR collapsed, Georgia’s tea industry went with it, as the state, bogged down in two separatist conflicts, civil war and general economic chaos, was all but dysfunctional. Abandoned factories were gutted for their scrap metal and untended tea plantations soon became overgrown with weeds and wild verdure.

But as the country recovered from a decade of entropy to become one of the fastest growing economies in the world, investors put their sights on Georgian tea. Local companies like Gurieli Tea, set its sights on rebooting the industry with quality mass-produced branded loose-leaf and bagged tea. Meanwhile, individual enthusiasts have been taking the high road to produce and package premium organic tea and have found a niche market that is beginning to take root.

“I look for places where wild tea grows, in old plantations,” explains 55-year-old Shota Bitadze, who, in 2006, founded the Georgian Organic Tea Producers Association, a group of 16 families committed to the growing and production of first-rate, organic tea. He shows me pictures of long thin stalks sparsely punctuated with budding leaves. “These are growing buds – high quality,” he assures. “It’s a new method.”

A taoist and practitioner of tai chi, Shota and his 25-year-old son Giorgi went to China in 2009 to begin a four-year process of learning the ins and outs of tea: varieties, cultivation, technologies and production. Now they are at the forefront of a Georgian tea renaissance. Their wild black tea picked up awards at the prestigious 2016 Tea Masters Cup International in Seoul for best aroma, best taste, and best aftertaste.

Shota also introduced an impressive new method for brewing loose-leaf tea based on an old Georgian technique, by using a wide-bottomed glass wine decanter for extraction control. He serves into wine glasses, which perfectly capture the multi-layered herbal aromas.

In addition to their wild tea, the Bitadzes also package black, green, white and wild quince and blueberry leaves grown and picked by association members. They have also been dabbling in the cultivation of purple tea, a delicious new strain developed in China in 1985, well suited to Georgia’s northerly, sub-tropical climate.

The Bitadzes operate from a cozy 19th-century cellar in Tbilisi’s Sololaki neighborhood that is part museum, part shop. A packing bag in the corner is stuffed with dried Kvanchkara grapes, a variety from the mountainous region of Racha used for premium semi-sweet wine. Shota eagerly demonstrates how he sifts the grapes to get a fine powder of natural vitamin-packed tea. “Here,” he says bagging up a few spoonfuls of the herbal crumbs, “for your health.”

“Well-being” is like the linchpin connecting Georgian Organic’s members. Anna Vartanova, the association’s project manager, was drawn to tea through her yoga and tai chi friends who would gather after sessions for informal tea ceremonies. Now she is working on organizing tea tours and workshops with a zen-like determination. “It’s what I want to do my life, I just want to do it the right way,” Anna says, pouring a perfectly brewed white tea from a carafe into a wine glass. It is delicate, slightly sweet and free of bitterness.

In the Vake neighborhood, we follow a yoga instructor into a snug apartment decorated in fine contemporary art pieces. While she enters a bedroom for her lesson, Nana Kirmelashvili leads us to the dining table for a sampling of tea she grows with her husband Zura in the village of Nagomari in Guria.

“During the Soviet times this village was all tea. Two-story houses, it was rich, everyone had tea in their yards. And after communism died, nobody thought about it [tea] for thirty years. We went to the village and all the tea – it was like a jungle,” Nana describes.

While the village’s biggest asset goes to seed, some 80 percent of its population goes to Turkey to pick tea. Nana, an art director by profession, thought it ludicrous that although villagers knew the European Union was offering agricultural grants for tea production, they preferred to go abroad instead of exploiting what was literally growing under their feet.

Three years ago, Nana and her husband decided to jump in feet first: They bought 12 hectares and became tea farmers. She uses her art background to help “cultivate people” through creative marketing and packaging, and is quick to remind, “Tea is also an art form.” “We are following the wine pattern. Who was drinking good wine 20 years ago?” she asks rhetorically.

Growers like Nana can’t compete with the volume of big companies, yet their high-quality teas are finding a growing local market at restaurants, hotels and the airport duty free shop. “Georgians are fond of tea – they just forgot and went to coffee, but they are coming back,” Nana says. A retail cost of 100 lari ($40) a kilogram is a fair price for such an exclusive product. After a cup of their subtle, low-caffeinated Delicate Black, the thought of drinking Lipton again is simply repulsive.