Uzbekistan was the USSR’s showcase for the Soviet east, a natural venue for a cultural jamboree of post-colonial nations. 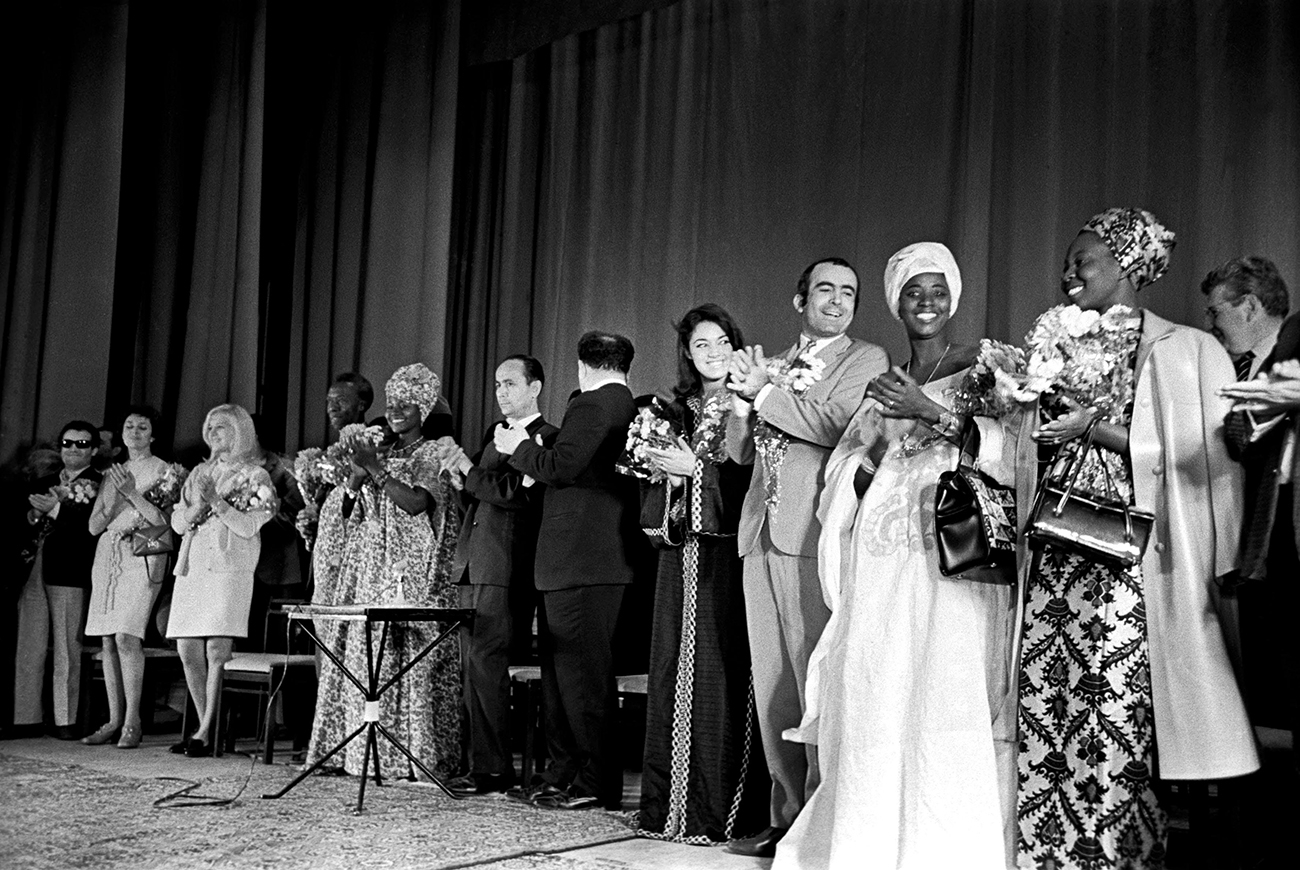 The opening ceremony of the First International Film Festival of Asian and African and Latin American Countries in Tashkent, Uzbekistan, 1968. (SPUTNIK/Alamy Stock Photo)

Kaneto Shindo’s movie Kuroneko (Black Cat) remains firmly impressed in Elparid Khodjayev’s memory. When Khodjayev watched it as a 22-year-old in a Tashkent screening hall, almost exactly 50 years ago, he was shocked by its stark blend of sexual violence, eroticism and horror.

That the Japanese film was shown at all was only because it was among the selection in the inaugural Tashkent Festival of African and Asian Cinema, an event in October 1968 that brought together dozens of filmmakers from almost 50 Asian and African countries.

This mood of liberation was both accidental and intentional. If viewers enjoyed consuming previously unimaginable sights onscreen, the greater intent was strictly political – or geopolitical to be exact.

The Uzbek SSR in the 1960s felt like a natural venue for a cultural jamboree intended to project the Soviet Union’s affinity with nations that had just emerged from under the yoke of European imperial rule.

“These countries started to see the development of a national cinema. And Uzbekistan was the USSR’s showcase for the Soviet east. For that reason, Moscow decided to bring together people from Asia and Africa in Tashkent,” said Uzbek art historian Sabohat Khaytmatova.

In 1976, the biennial festival was expanded to include entries from Latin America, extending its cultural reach into a region where leftist politics had long taken root. By the time of the festival’s demise in 1992, there had been 10 editions.

The headlining movie for the 1968 edition was more conventional fare than many other entries. Horsemen of Revolution, directed by a Kamil Yarmatov already in his mid-sixties, is a tale of revolutionary heroism and intrigue across Central Asia. The best represented countries in the 1968 festival, where 78 movies screened, were India, with 13 movies, and Egypt, with 9.

Foreign movies needed to go through a careful selection process, however, to account for political, moral and aesthetic qualities.

As Elena Razlogova, a cultural historian at Montreal’s Concordia University, explained to Eurasianet, the films would be vetted and chosen by representatives from Sovexportfilm, the state agency responsible from spreading Soviet film across the world, and diplomatic staff in the relevant countries.

“Most wrote a report back describing the films they saw – most films they saw in their entirety. It is true that during the first few festivals especially, some films were admitted just from synopses, because it was more important to get an extra country to participate than to get a ‘politically correct’ film. Later, in the 1970s, most films were screened by a committee before selection,” Razlogova told Eurasianet in an email.

Khaytmatova, the art historian, who was also 22 at the time of the maiden festival, got a job working in the press center. Preparation began six months in advance and was led by a team from the USSR State Committee for Cinematography, or Goskino, which had already gained years of experience organizing a similarly sized event in Moscow.

One of the more curious challenges for organizers was to screen the movies in a way that local audiences could understand. Some of the movies came with subtitles, but that was the exception, not the norm. So it was that a team of simultaneous interpreters would sit in booths, scripts in hand, and pipe their live Russian translation into the screening hall.

The translators appear to have benefited from the temporary air of permissiveness.

As Razlogova wrote in an in-depth article on the history of simultaneous translation in the Soviet Union, the Tashkent festival was notable for the low level of KGB monitoring and for the fact that translators, audiences and foreign visitors were able to mingle freely. Razlogova based her account on the experiences of her father and aunt, who were translators at the 1968 festival.

During that maiden edition, international guests were put up in the Tashkent Hotel, one of the few that were permitted to take foreigners. The hotel bar would sell spirits for foreign currency – always in demand, even in those days.

“They would only allow foreign directors, actors and accredited journalists in there. The bar offered all kinds of cocktails, you could dance with actresses, and if things got really merry, you could watch a live strip show by some drunk film star,” Khodjayev said.

Indeed, the appeal of potentially being exposed to some perceived form of lewdness is a leitmotif for Tashkent festival memories. In an incident recalled by translator Natalia Nusinova in an interview given to Razlogova, when one scene in a movie showed a semi-naked woman emerging from a swimming pool, a middle-aged man in the audience sprung up and turned to his companion to ask: “Ahmed, remember this?”

By 1974, Tashkent had built a four-star hotel, the Uzbekistan, where all the festival participants could be accommodated. Again, a bar operating around the clock sold whisky, rum and other spirits in exchange for foreign cash.

International delegations would also regularly be taken on expeditions to places like Samarkand and sent to attend staged meetings with students and factory workers.

Khaytmatova’s proudest festival memory was from 1976, when renowned Italian director Michelangelo Antonioni and Tonino Guerra – a screenwriter who worked with Antonioni, Andrei Tarkovsky, Federico Fellini and other legendary directors – attended the festival.

“The famous Uzbek director Ali Khamrayev invited the two famous Italians to Tashkent and then accompanied them on a trip to Samarkand,” Khaytmatova said.

A decade later, Khamrayev would move to Italy to work on a film project about Tamerlane, whose mausoleum in Samarkand the Uzbek director showed to Antonioni and Guerra after much wrangling with recalcitrant officials.

Distant memories of those Tashkent festivals lead film-lovers in Uzbekistan to wonder wistfully whether the city is ever likely to see the same again.

In 2012, Gulnara Karimova, the eldest daughter of then-President Islam Karimov, attempted to revive the spirit of the festival through a more glitz-centered affair dubbed the Golden Leopard – a transparent tribute to the animal-themed festivals of Berlin and Venice, where winners take home Golden Bears and Golden Lions, respectively. To lend the first edition some heft, Karimova lured over Moritz de Hadeln – who has at various times presided over film festivals in Locarno, Berlin and Venice – to serve as head of the jury.

But that annual event became defunct as soon as 2014, when Karimova ran into trouble with the authorities over a festering corruption scandal.

Khaytmatova, who was like many of her peers propelled by the Tashkent festival into a lifetime of film appreciation, dreams that something else may come along.

“Tashkent needs a new, contemporary international film festival format. This would only be a bonus for Uzbek cinema. We cannot be isolated from the trends taking place in world cinema,” she said.