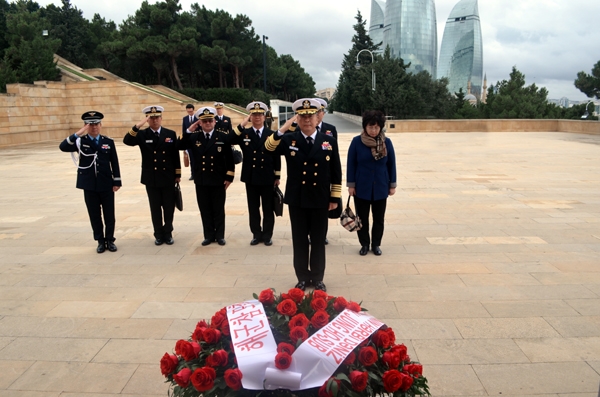 The head of South Korea's navy is on a short tour around the Caspian Sea, visiting military officials in Kazakhstan and Azerbaijan to discuss security cooperation.

Admiral Jung Ho-sub visited Astana on Monday and Baku on Tuesday. The official message in each country was remarkably similar: the aim of the visit was to build naval relations with the respective countries, specifically singling out the hosting of sailors at South Korean military schools and conducting training on Korean ships.

But there was likely more to the visit than that. South Korea has been in discussions with both Azerbaijan and Kazakhstan about equipping their growing navies. In 2013, Azerbaijani officials visited South Korea with an extensive shopping list that included submarine boats, naval destroyers, transport ships.

Similarly, Korean firms have been active in seeking naval military business from Kazakhstan, including possibly building warships and constructing a new shipyard on the Caspian.

If any military deals between South Korea and the Caspian states have gone through, they haven't been made public. After the Azerbaijanis' trip to Korea in 2013, local media reported that one of Seoul's concerns about selling weaponry to Azerbaijan was the possibility of irking Russia. Nevertheless, Korea represents a relatively uncontroversial option for Astana and Baku as they pursue the increasingly sensitive process of Caspian naval armament.