South Ossetia: Where Memories of the Pre-Conflict Era Are Fading 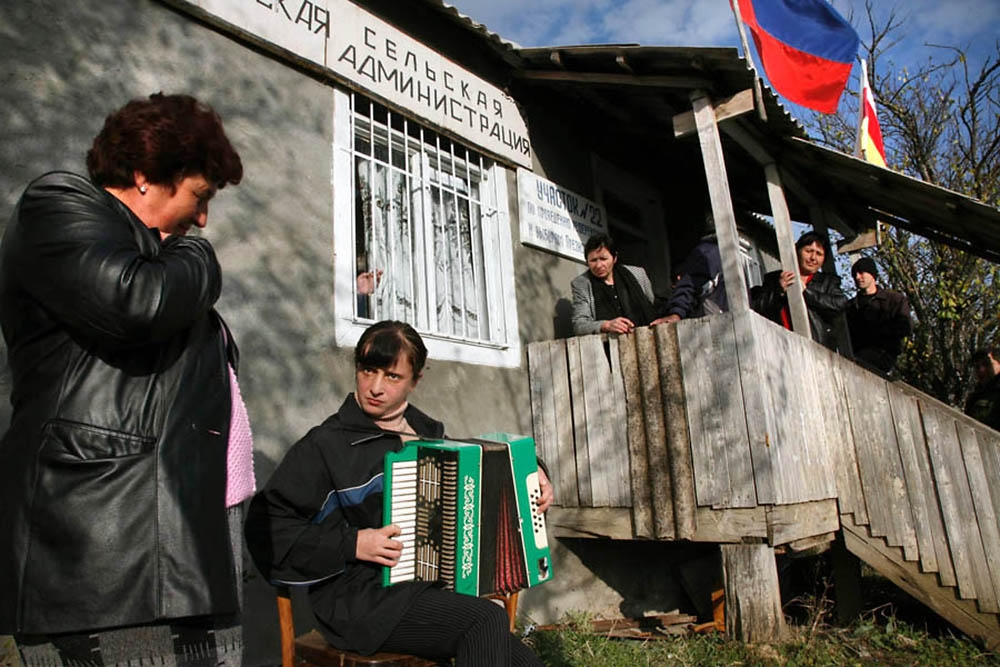 Kochieva Ela plays an accordion and Dzigoyeva Fenia sings during the recent presidential election at a polling station in the village of Dampaleti outside of Tskhinvali. Dampaleti, located on the Ossetian controlled part of South Ossetia, has a mixed population of Ossetians and Georgians. (Photo: Sophia Mizante)

As the Soviet-era sedan doubling as a taxi trundled toward Georgia's breakaway region of South Ossetia, passenger conversation turned to Tbilisi's longstanding campaign to regain control of this hardscrabble territory in the foothills of the Caucasus. "It's not a conflict between the Ossetian and Georgian people," commented Rezo, a pensioner in Gori, the closest Georgian town to South Ossetia. "It's a conflict between governments."

For conflict zone residents, that point of view is common. For Georgians, though, the question now is with which self-declared government of South Ossetia to hold dialogue. [For details, see the Eurasia Insight archive].

Two separate presidential elections and referenda were held in South Ossetia on November 12. As expected, Eduard Kokoiti, the de facto president of the self-declared Republic of South Ossetia, triumphed in the polls organized by officials in the regional capital, Tskhinvali. [For details, see the Eurasia Insight archive]. South Ossetia's Central Election Commission announced on November 14 that the 42-year-old Kokoiti, president since 2001, had been reelected with 98.1 percent of the vote. A referendum on independence, the second since 1992, received the approval of 99.88 percent of voters, according to official data. Turnout was put at 95.1 percent of 55,163 registered voters.

A different scenario prevailed, however, in Georgian-controlled portions of South Ossetia: Dmitri Sanakoyev  widely reputed among Ossetians and Georgians alike to be backed by Tbilisi  claimed the title of president of South Ossetia, following a so-called "alternative" election also held on November 12. Unlike the first referendum, the "alternative" referendum quizzed voters about the desirability of talks with Georgia about joining a potential federation.

As in Tskhinvali, official results for the "alternative" election and referendum were nearly unanimous. Election officials for this vote, based in the Georgian-controlled village of Eredvi, announced on November 16 that 94 percent of registered voters in both Georgian and Osssetian-controlled villages participating in the election had given the nod to Sanakoyev and talks with Tbilisi. Turnout was placed at 96 percent of 57,000 voters. Officials in Tskhinvali, however, strongly deny that the "alternative" election and referendum were held in Ossetian-controlled territory.

For the "alternative" election camp, though, Georgians and Ossetians can appear as distinct audiences. One Sanakoyev campaign brochure, in Ossetian, touted his role in the early 1990s as a fighter in South Ossetia's 1991-1992 armed struggle against Georgia for independence, and, again, with fellow breakaway region Abkhazia against "the aggressor" in 1992-1993. A second campaign brochure, in Georgian, omitted all war references, inserting in its place a recollection of the time when Ossetians and Georgians lived together in peace.

Meanwhile, hostilities continue to simmer. On November 13, in the South Ossetian village of Java, a blaze consumed the house of "alternative" election commission head Uzurmag Karusov. Karusov, a former advisor to the South Ossetian leader, claims that Kokoiti ordered the fire be set. Two days later, Irina Gagloyeva, the chairwoman of the South Ossetian leadership's Committee for Information and the Press, was hospitalized after a reported gas explosion in her house in Tskhinvali. Kokoiti government officials have charged that the blast was the work of Georgian operatives.

Boundaries between Ossetians and Georgians remain, in many ways, fluid. Mixed Georgian and Ossetian villages are found throughout the territory, and Georgian-Ossetian families are common. Before the recent spike in tensions, Tskhinvali residents would regularly travel to Gori or elsewhere in Georgia to visit relatives or friends. Georgian cell phone services operate here, and Georgian television broadcasts can also be received, though knowledge of the Georgian language appears largely limited to those Ossetians old enough to remember the region's past as an autonomous region of the Soviet Socialist Republic of Georgia.

Memories of that pre-war era are fading fast. "We used to live pretty well with Georgia. We were peaceful neighbors," said Lamsira, a 30ish Ossetian woman, married to a Georgian and the mother of two elementary-school-age boys, who sells beer out of her house in Tskhinvali. "But the younger generation does not know them as neighbors, but as enemies, because they've seen so many murders and killings."

The 1992 and 2006 referenda on independence were not the first expressions of political differences. In 1920, Ossetian and Georgian forces clashed when South Ossetia tried to pull out of the two-year-old Georgian Democratic Republic, the Menshevik-led independent state that preceded Georgia's annexation by the Red Army in 1921. The independence drive surfaced again in 1989 when South Ossetia's Supreme Soviet voted for union with North Ossetia, a Russian republic. In response, the Georgian parliament revoked South Ossetia's autonomy. Two years later, war broke out between the two sides.

Establishing common ground between the two sides has since proven elusive. Four-way monitoring of the cease-fire agreement  by Georgia, South Ossetia, the Russian Federation's North Ossetia, and Russia itself  have been ongoing since 1992, but without bringing a permanent resolution to the conflict.

In a November 13 statement, the Organization for Security and Cooperation in Europe, which facilitates the talks, argued that the attention placed on the breakaway region's November 12 presidential elections and referendum on independence would have been better placed on negotiating a peaceful resolution to the 17-year conflict between Georgia and South Ossetia. The North Atlantic Treaty Organization, the Council of Europe, the European Union and the United States have all expressed similar opinions.

Their disapproval carries little weight in Tskhinvali. "We're a nation and we have the right to the free expression of our opinion," Gagloyeva, the South Ossetian leadership's spokesperson, said on November 11. "It's our right to say we don't want to be with Georgia."

Sophia Mizante is a freelance photojournalist based in Tbilisi. Elizabeth Owen is EurasiaNet.org's Caucasus news editor in Tbilisi.