The incumbent has come under fire for a controversial military deployment to Ukraine, and it’s not clear that a proposal to annex the territory to Russia will help him. 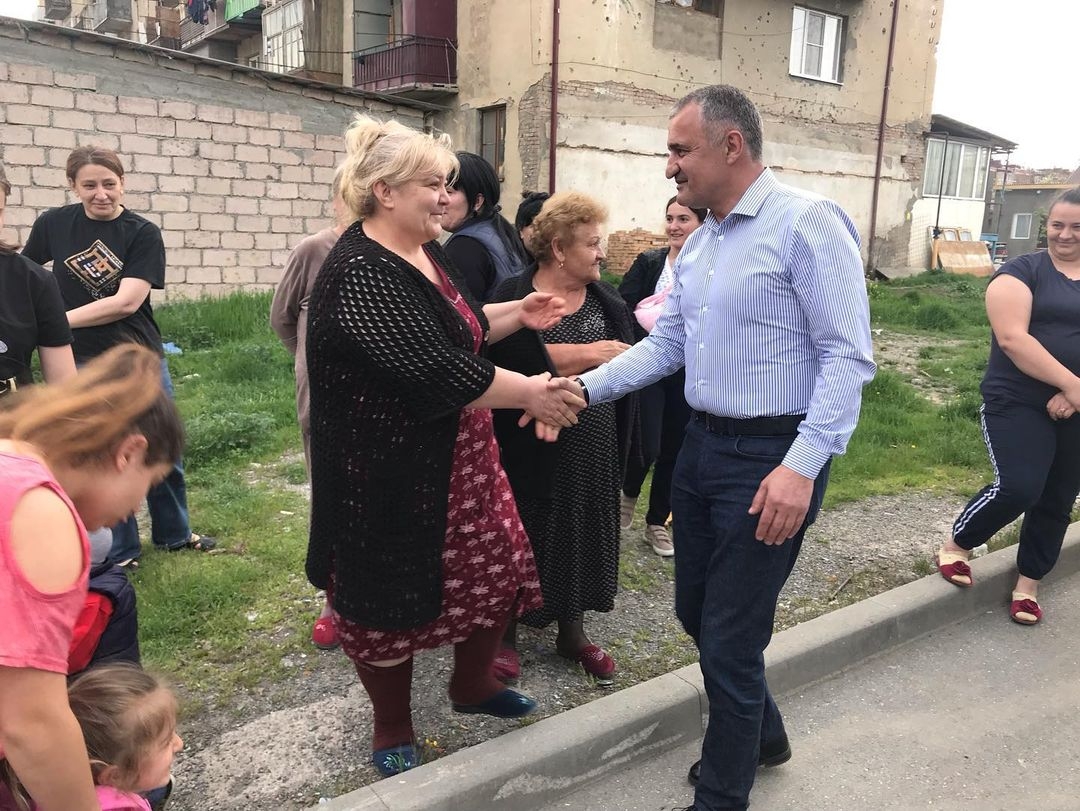 Voters in South Ossetia are going to the polls to elect a new leader amid public controversy over the deployment of troops from the territory to fight for Russia in Ukraine and the possibility of the breakaway territory joining Russia.

The race for president of the tiny self-proclaimed republic pits the incumbent Anatoliy Bibilov against Alan Gagloev, the challenger who unexpectedly came out ahead after the first round on April 10. Gagloev took 39 percent of the votes, edging out Bibilov, who took 35 percent. The second round will take place on May 8.

Bibilov has led South Ossetia since 2017, when he won a surprise victory over an incumbent who was widely considered the Kremlin favorite. But he has since lost favor with many South Ossetians for his authoritarian tendencies.

Now, facing a difficult battle for reelection, Bibilov has been seeking to ingratiate himself with South Ossetia’s patrons in Moscow. But his attempts to tie himself to Russia have only backfired at home.

Bibilov appears to have suffered from public discontent over the deployment of Ossetian soldiers, members of Russian military units based in South Ossetia, to fight in Ukraine. In the days ahead of the first round of voting, around 300 soldiers arrived back in South Ossetia after having deserted in Ukraine, complaining of poor treatment and being thrown into the battle unprepared.

South Ossetia broke away from Georgia in a war in the early 1990s, and in 2008 Georgia attempted to retake the territory militarily. Russia invaded Georgia in response and subsequently formally recognized South Ossetia’s independence. Russia provides heavy military and financial backing to the territory, which most of the rest of the world considers a breakaway part of Georgia.

“Bibilov wanted to take advantage of that,” Timur Tskhurbati, an analyst in South Ossetia, told Eurasianet. “He says that Russia helped us, so we should help Russia, and a lot of Ossetians have died in Donbas [Ukraine] because of that.” The public opposition to the Ukraine deployment “hurt him in the first round.”

South Ossetians make several arguments against deploying their soldiers to Ukraine. Many believe that sending soldiers out of the territory could expose them to another attack from Georgia. Others have been outraged by reports of disorganization and inadequate equipment that Ossetian soldiers have been forced to endure in Ukraine.

One source in South Ossetia told the independent Russian news site Media Zona that a mutiny among Ossetian soldiers in Ukraine began when an officer refused to let them retrieve the body of one of their unit who had been killed by a mine. “For us Ossetians, the body of a dead friend is holy,” the source said. “And the general told them, ‘What body, we’ll send back an empty coffin.’ They said: ‘We are soldiers, we’re not cowards, but if they send you into this slaughter and then don’t take your bodies – we don’t need this shit.’ And they left.”

In an extraordinary recording leaked to Media Zona, a group of the South Ossetian soldiers who had returned met with Bibilov and confronted him about the disastrous conditions they were forced to fight in, including faulty tactics, poor logistics, and broken weaponry. One also argued that Ukraine wasn’t South Ossetians’ war, and Bibilov pushed back.

“Many people died for South Ossetia, Russians and other nationalities […] and now you are telling me that if something happened here in Ossetia, that we would be left alone? If these fascists, Nazis, appeared in Ukraine, you think they wouldn’t be here in Ossetia the next day?” he replied, repeating Kremlin propaganda justifying the invasion. If Russia retreated, Ossetia would be the next to fall, he said: “We are fighting there but we are defending our own homeland.”

Those arguments have fallen flat in South Ossetia, Tskhurbati said. “People in South Ossetia have very different opinions about the war in Ukraine. I don’t think we should be fighting there, it’s not our war, and a lot of Ossetians think that way,” he said. “We have paid a very big price, about 50 Ossetians have died,” including those from North Ossetia, a neighboring republic in Russia.

It wasn’t actually Bibilov’s decision to send the soldiers: they are members of Russian units, and it was Russia’s military leadership that sent them to Ukraine. But his enthusiastic backing of the deployment has tied him to it, argued local blogger Alan Parastayev. “It’s an interesting situation: When people complain about it, he can’t say ‘It wasn’t me,’ because when the soldiers were sent there he took credit for it,” Parastayev told Caucasian Knot. “So now it’s difficult to reject this ‘gaffe.’”

Apparently aware that he was suffering in the polls, Bibilov attempted a Hail Mary: promising to hold a referendum on joining Russia. That is a broadly popular position in South Ossetia, but it has been floated many times before and never taken place.

This time, following some positive comments from senior Russian officials immediately following Bibilov’s announcement, the proposal has been little mentioned in Moscow, and its fate is uncertain even if Bibilov were to win.

“He thought if he declared the referendum to join Russia that he would be doing a big favor to Russia. But he wasn’t. Russia has enough problems without us, they have no need for annexing South Ossetia,” Tskhurbati said. “He’s just trying to play on the emotions of poorly informed voters who think that joining Russia would be a guarantee of our security.”

For his part, challenger Gagloev hasn’t pushed back hard against Bibilov’s positions. He appears to not be in favor of the Ukraine deployment, but hasn’t come out explicitly against it, Tskhurbati said. And he has said that he approves of joining Russia in principle, but has implied that this may not be the right time.

In the final days of the campaign the news has been dominated by a last-minute attempt to open additional polling stations in Vladikavkaz, the capital of North Ossetia. The Central Election Commission said it was responding to requests from voters, but to many observers the volume and timing of those requests was suspicious, and pointed to a desperate effort by Bibilov to manipulate a vote he was otherwise in danger of losing.

“We have a very tense situation now,” Tskhurbati said. Taking into account the number of endorsements that Gagloev has gotten, “Bibilov has no chance. But there is a serious fear that he will take some unsavory measures to stay in power. Logically, he should lose. But I am not going to predict the result.”