The visit came as Republic of Srpska has increasingly been carrying out its own, pro-Moscow, foreign policy. 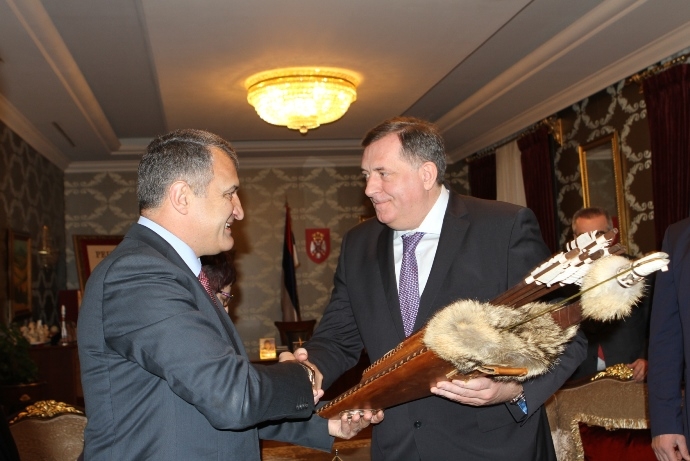 On January 25, the chairperson of the National Assembly of the Republic of Serbia, Maja Gojkovic, made her first official visit to Georgia. The high-level visit follows in the wake of a diplomatic dispute between Tbilisi and the government in Serbia's neighbor, Bosnia and Herzegovina.

South Ossetia’s de facto leader Anatoly Bibilov spent three days in the Republic of Srpska, a Serbian-majority entity of Bosnia and Herzegovina, in early January. The visit led to calls from the Georgian government for its counterpart in Sarajevo to condemn the meeting.

The Serbian representative also thanked Georgia for its refusal to recognize Kosovo as an independent state.

The Republic of Srpska, a sub-national entity led by President Milorad Dodik, has been pushing for more autonomy within Bosnia and Herzegovina. Controversially, the region hosted “Statehood Day” celebrations on January 9, which Bibilov attended.

After the event, Tbilisi – which considers South Ossetia to be its territory – sent a diplomatic note to the Foreign Ministry in Sarajevo protesting the visit. The note objected to Bibilov’s ostensibly official presence as “President of South Ossetia.” The statement also requested Sarajevo to re-affirm its support for Georgia's territorial integrity and its commitment to non-interference into the internal affairs of Georgia.

Bosnia and Herzegovina’s Foreign Ministry responded that it had not been made aware of the South Ossetian delegation’s visit.

Dodik was indignant, arguing that his guests were visiting the Serb entity, not the Bosnian state.

Analysts say the meeting was likely organized during Bibilov’s meeting with Russian President Vladimir Putin on November 14. It is of a piece with South Ossetia's relations with other unrecognized territories like the eastern Ukrainian statelets, Abkhazia, and Transnistria.

During his visit, Bibilov said that South Ossetia and the Republic of Srpska have a shared path in defending their identity. He also said the two share a common relationship with their “strategic partner,” the Russian Federation.

The comparison is inexact, to put it generously: South Ossetia is unrecognized by Georgia and nearly entirely supported by Moscow, while the Republic of Srpska is a partially autonomous, but legally recognized part of Bosnia. Nevertheless, Dodik has been building ties with Russia; Immediately after Bibilov’s visit, allegations emerged that Russian mercenaries were training Dodik's personal, loyalist paramilitary forces.

Sarajevo aims to join NATO, but resistance from Dodik has delayed the process. The appearance of Russian-trained paramilitaries is the latest setback. Balkan analysts have also noted that this development follows on 15 months after Russia’s intelligence services were implicated in a failed coup in neighboring Montenegro. The operatives planned to storm the parliament and assassinate the country’s pro-western leader and prevent it from joining NATO. The plot was quickly discovered however and Montenegro became the alliance’s newest member in June 2017.

The South Ossetian leader’s press service later announced that it intended to appoint a special envoy to the Republic of Srpska.

Bibilov also paid a visit to Belgrade, though he appeared to not have any official meetings, instead meeting with church officials and members of Serbia's royal family.