Some in the breakaway territory worry that, by getting involved militarily in Ukraine, they could be exposing themselves to an attack from Georgia. 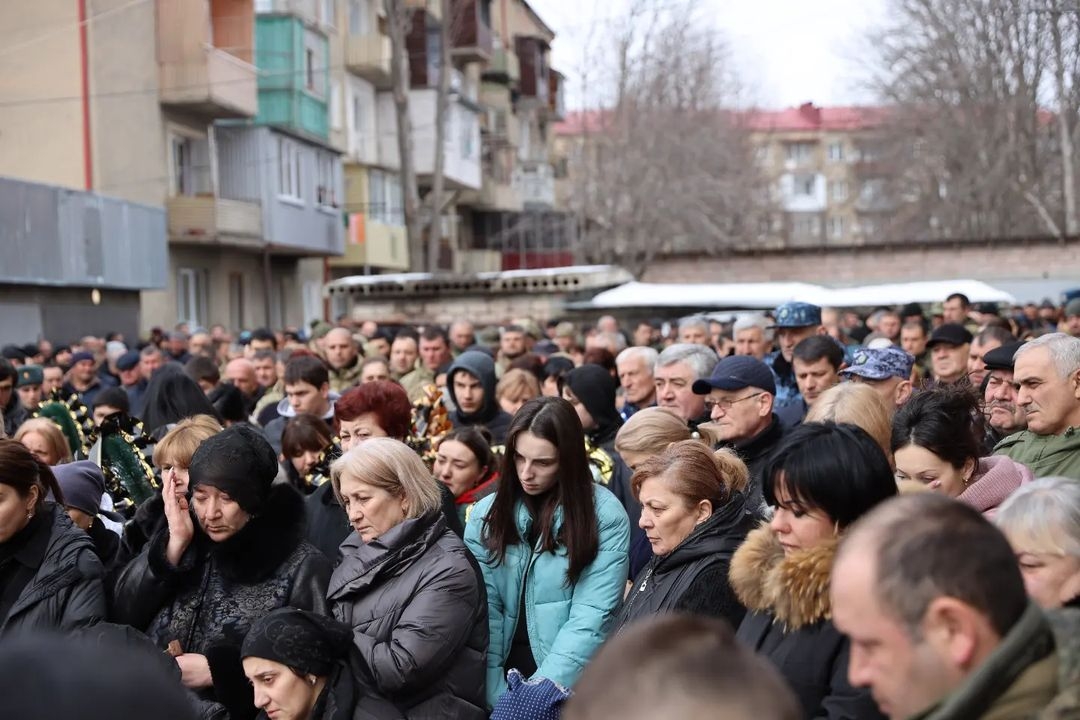 Mourners at the funeral of Andrei Bakayev, a South Ossetian soldier killed in Ukraine, on March 17. (photo: Instagram, Anatoliy Bibilov)

When Andrei Bakayev, a 35-year-old soldier from South Ossetia, was killed in Ukraine, he was given a funeral with full military honors back home.

Bakayev was “an Ossetian and Russian, a real defender,” South Ossetia’s de facto leader Anatoly Bibilov said at the funeral in Tskhinvali, the territory’s capital, on March 17. “He understood where he was going, but military duty stood above all.”

An initial group was sent to the fight on March 16, whom videos on social media showed leaving in armored vehicles. A second group was deployed on March 26, the territory’s authorities said. The soldiers are part of Russian military units based in South Ossetia but which also include some local contract soldiers.

There have been no reports from Abkhazia of soldiers from there, whether Russians or locals, being sent to Ukraine. But the territory’s de facto defense ministry has said that it “entirely supports Russia’s special military operation being carried out in Ukraine.”

The two territories are recognized by most of the world as Georgian, but they both declared independence in the early 1990s after breaking away from Georgia. Following the 2008 war between Russia and Georgia, Moscow formally recognized their independence, but only a handful of other states have followed suit.

The territories are now heavily financially and military backed by Russia. The total number of Russian troops stationed in them is not known, but Georgian sources have estimated it at about 10,000. And as Russia faces a tougher-than-expected fight in Ukraine it is being forced to bring in additional forces, including from the Caucasus.

Support from the two territories for Russia’s attack on Ukraine has not been expressed only militarily.

There have been shows of public support for the war, albeit choreographed by the authorities. South Ossetia’s ruling United Ossetia party has organized car races and dance performances that attracted dozens of people in the center of Tskhinvali waving the flags of South Ossetia, Donetsk and Lugansk, and Russia.

“We support Russia because we ourselves went through the tragedy of nationalism and fascism. We are on the side of Russia, on the side of the people of Donbas,” Bibilov said at one such rally.

In Abkhazia’s capital of Sukhumi, some 2,500 people – who appeared to be largely military, security, and law-enforcement personnel – gathered at Dinamo Stadium for a March 11 rally in support of the war.

“I, as the head of state, the entire leadership of the Republic of Abkhazia and our multi-ethnic people fully support Russian President Vladimir Vladimirovich Putin,” Abkhazia’s de facto leader, Aslan Bzhania, said at that rally.

Both territories also have been taking in civilians fleeing the fighting in Donbas.

At least 34 soldiers from North Ossetia (a republic in Russia bordering South Ossetia) have been killed in Ukraine as of March 26. That has fed worries in South Ossetia about the fate of its soldiers; and there has been some concern that deploying the territory’s military to Ukraine could leave it defenseless against Georgia.

“Everything related to the situation in Ukraine can affect us, and we, unfortunately, are not ready for that,” Eduard Gabareav, a former military officer in South Ossetia’s armed forces, told RFE/RL. “It is necessary to protect your home, but it is not serious to trust it to the end even to a brotherly nation. We have to protect our own home and not ask anyone else to do it for us.”

Bibilov has pushed back against those kinds of concerns. “The Ossetian man has no other choice,” he wrote on his Telegram channel. “I am told that our boys are being sent to their death. No – they are being sent to win.” But he added that the territory’s armed forces need to be prepared for any “provocation” from Georgia.

In Abkhazia, the government put their armed forces on high alert in response to NATO staff exercises in Georgia. “Tbilisi has not renounced its bellicose rhetoric and its course toward entering the North Atlantic Alliance,” a military spokesperson said on March 26.

Georgians, however, have shown little interest in going on the offensive even with a distracted Russia.

“We are no threat to anyone,” Georgian Foreign Minister Davit Zalkaliani said on March 1, in response to statements by the de facto authorities in Abkhazia and South Ossetia. “We will not use force. We have a declared peace policy that is supported by our international partners.”

There have been some outside calls for Georgia to take advantage of the situation.

“If additional war fronts begin emerging for the Russian Federation, made possible due to its actions in the recent past, that would be very, very helpful for us,” said Oleksiy Danilov, the secretary of Ukraine’s National Security and Defense Council, on March 26. He complained that Georgia has been “unethical” in this regard.

“There are going to be a few countries that realize now maybe a good time to get your land back from Russia,” tweeted a pro-Georgia member of the United States Congress, Adam Kinzinger, on March 29. “Fire sale on occupied territories.”

But Tbilisi has shunned such calls.

“[C]alling on Georgia (&others) to abandon its policy of peaceful restoration of territorial integrity, by opening [a] second front so that our cities and villages are destroyed and Georgian women and children are killed too? Really?” tweeted Nikoloz Samkharadze, the chair of the Georgian parliament’s foreign relations committee, in response to Danilov’s comments.

“I’m sorry, but this is too much,” added Nika Gvaramia, an opposition journalist, in a Facebook post. “This doesn’t suit anyone except Russia.”