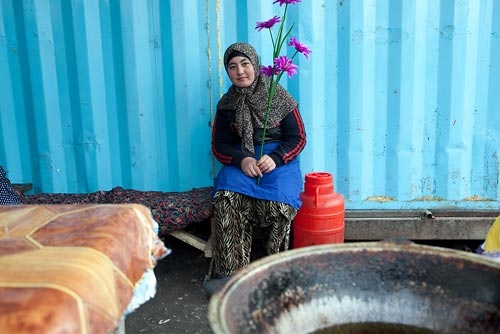 Inter-ethnic tension has spiked in Kyrgyzstan’s southern capital Osh, which is home to a large ethnic Uzbek minority. The lack of Uzbek representation in government agencies and law-enforcement bodies is the main source of discontent.

Since the April 7 unrest that caused the downfall of former president Kurmanbek Bakiyev’s adminsitration, Kyrgyzstan’s provisional leaders have struggled to extend their authority into southern regions. [For background see EurasiaNet archive].
It is widely believed Bakiyev supporters in the South are trying to foment trouble. Some reports speak of leaflets being distributed calling for southern Kyrgyzstan to secede from the North. Bakiyev hails from the southern town of Jalal-abad. [For background see EurasiaNet archive].

During the week prior to Bakiyev’s departure into exile on April 15, Osh and Jalal-abad were the scenes of violence. But those confrontations were not inter-ethnic in nature, instead pitting supporters of the provisional government against Bakiyev loyalists. [For background see the Eurasia Insight archive].

What specifically triggered the rise in Uzbek-Kyrgyz tension in recent days is not so easy to identify. Rumors, more than specific actions, appear to be mainly at fault.

During the night of April 30, a widely believed story goes, a group of Kyrgyz attempted to extort $500 from several Uzbek car dealers. After refusing to pay, the Uzbeks were beaten up. The victims called their friends and relatives asking for help, and a standoff ensued. Osh police then intervened to prevent a melee.

“Car dealers, ethnic Uzbeks never pay Kyrgyz racketeers,” said a witness, a 27-year-old who introduced himself as Oibek. “Should we pay them only because we are Uzbeks? No, we won’t.”

Other, unverifiable stories suggest ethnic Uzbeks were the instigators of trouble. Whatever the case, residents of the city were panic-stricken all weekend as rumors mounted. Residents called each other and reported that roaming groups of young Uzbek men wielding sticks and guns were going to attack ethnic Kyrgyz and vice-versa. Some reported shooting. People in Uzbek communities started organizing squads of young people to protect neighborhoods, shouting, “The Kyrgyz are coming.” Other neighborhoods organized ethnicity-blind civilian defense brigades in an effort to preserve order.

Ultimately, the rumors proved false and the much-feared ethnic violence did not materialize. An anxious calm has now returned to Osh, local officials say. “The situation has been stabilized, and all rumors about use of arms and machine-guns are just rumors and nothing else,” Zamir Sydykov, a spokesman for the Osh city police told EurasiaNet.org on May 4.

In confronting the recent rumors, many Osh residents had in the back of their minds the bloody events of 1990, when land disputes sparked rioting that led to dozens of deaths.

“The reason why people believe these rumors is fear generated by the inter-ethnic clashes of 1990 when there were lots of brutalities,” Maksuda Aitieva, the director of the Osh Media Resource Center, told EurasiaNet.org. “In southern Kyrgyzstan, there is no common legal platform for the Kyrgyz and ethnic Uzbeks where they can jointly address their issues and problems.”

Prejudice and a lack of trust exacerbate the tensions.

“Representatives of the titular nation [Kyrgyz] are afraid of the political and public activity of ethnic Uzbeks, and don’t want to see ethnic Uzbeks in governmental structures,” said Svetlana Gafarova, and expert on inter-ethnic issues from Southern Vector, an Osh-based non-governmental organization (NGO). “They prefer that ethnic Uzbeks keep a low profile and [remain] passive. As for ethnic Uzbeks, they say this is their native land, that they are not foreign and alien and should have certain rights.”

Uzbeks make up the second largest ethnicity in Kyrgyzstan. According to the Kyrgyz Statistics Committee, there are 766,700 Uzbeks in Kyrgyzstan out of a total population of 5.4 million. But unofficial sources suggest the number is closer to a million. The majority of Uzbeks live in southern Kyrgyzstan.

Uzbeks complain that they are under-represented in the state structures, including law enforcement agencies. Some Kyrgyz activists admit this is a problem.

“The situation in Osh Province is interesting. The main governmental posts are taken by [Kyrgyz],” Aziza Abdurasulova, director of Kylym Shamy, a human rights watchdog, told EurasiaNet.org during a visit to Osh to assess the situation. Some “ethnic Uzbeks are entrepreneurs, they make money. It is representatives of the titular nation, who at the same time represent state structures, who are able to use their position to pursue financial interests,” she said, hinting that the underlying problem is the existence of extortion rackets.

Observers say that Uzbeks feel their complaints will never be addressed since the overwhelming majority of officials are Kyrgyz.

While speaking on Mezon TV, a private Osh-based broadcaster, Raya Kadyrova, the president of the Foundation for Tolerance International, said that ethnic minorities should be able to play a greater role in public life. “As a rule, only members of the titular nation are represented in state offices,” said Kadyrova. “Out of 550 Osh police officers, only 30 of them are ethnic Uzbeks. This does not reflect the real ethnic picture in Osh city and Osh Province.”