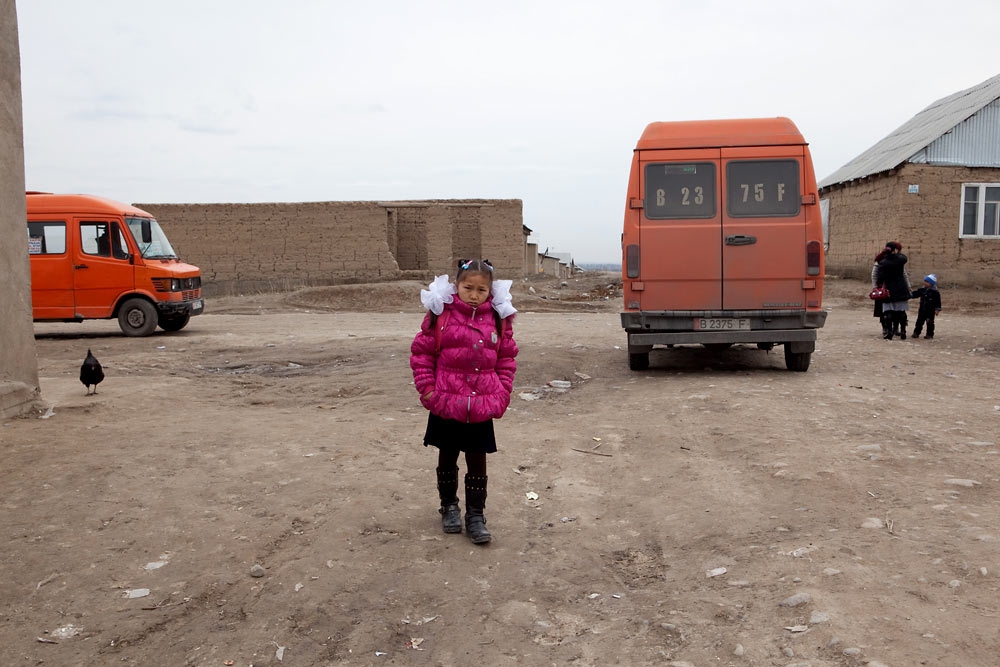 Azim Pasanov’s home on the outer limits of Bishkek, Kyrgyzstan’s capital, has no water and no electricity. Eighteen years after he moved there, his life remains unsettled. Doctors won’t see his bedridden wife, Sanabubu, and he can’t send all his grandchildren to school because he and his relatives still lack proper registration documents.

“We are like trash,” said Pasanov, a 65-year-old pensioner. “If people get sick, or a woman is about to deliver a baby, when we call ambulance they don’t come here. … Even if we go [to the hospital], nobody wants to see us, and we have to give a bribe.” He can only afford to send two of his four grandchildren to school because the bribes are too steep to send them all. “Children who are born here don’t have documents; the children don’t study,” he lamented.

Overall, there may be as many as 400,000 Kyrgyz citizens who share Pasanov’s plight. These people moved, mainly for economic reasons, without securing a proper residency permit, or propiska in Russian. Many migrated to Bishkek, where they settled on the outskirts, living as squatters in rough-hewn settlements known as novostroiki.

The chief difficulty for Pasanov and the hundreds of thousands of Kyrgyz like him is the fact that an individual’s access to basic social services and public education is tied to his or her propiska. Those without a valid residency permit are like illegal immigrants before the law.

Like many internal migrants, Pasanov’s family hails from a rural hamlet in southern Kyrgyzstan. His village was destroyed in an avalanche and, in the chaos following the Soviet Union’s breakup in 1991, there were no jobs and no way to rebuild. Along with 4,000 other families, the Pasanovs squat in the barren, sprawling Ak-Jar settlement a few kilometers from central Bishkek. Many of the mud-brick houses have foggy plastic sheets instead of windows. Unusual for Kyrgyzstan, there are no gardens; nothing will grow in the stony, windswept soil in Ak-Jar.

“They’re living in the 18th century,” said Jumagazy Sadir-uulu, the head of Arysh, a local non-governmental organization (NGO) that lobbies the government to modernize its propiska system.

“After the [uprising] in 2005, there were lots of government promises to southerners that if they would come to Bishkek they could get land. But now the registration system is unclear. People here are uneducated and can’t fight for their rights,” Sadir-uulu said.

During the late Soviet era, a propiska “became, in effect, an ‘internal visa’ that gave the person the right to live and work in a specified area. People were allowed to move, but only when this was necessitated by a new job,” according to a 2009 report prepared by the Interregional Network for Overcoming Social Exclusion in St. Petersburg.

Since the April 6-7 unrest that brought down former president Kurmanbek Bakiyev’s administration, little has changed in Ak-Jar. Amid the upheaval, some tried to seize better land, confirmed Talaibek Jakypov a social worker with the Committee to Protect Children. He added that many joined the ranks of the protesters in Bishkek in early April “because they live on the edge of poverty. They don’t have jobs. They don’t have documents. And most of the people who were on the square that day were from these types of places.” [For background see EurasiaNet's archive].

Some observers believe that local authorities want to perpetuate the propiska system for budgetary reasons. The lack of a valid propiska provides a ready excuse to municipal authorities to exclude otherwise deserving citizens access to public education, healthcare and an array of other services. This in turn, reduces the strain on a municipality’s coffers.

“To be registered, for example in Bishkek, people not only need a physical place to live, but they also must have right of ownership, or official permission from their hosts,” explained Tatiana Kotova, the Central Asia Representative for DanChurchAid, a non-denominational NGO receiving funds from the Danish government. “Needless to say that for many poor internal migrants none of those conditions are possible.”

Many internal migrants from rural areas do not know their rights. New legislation allows for a migrant to receive a temporary propiska for up to six months, but the law is not publicized, Jakypov said. “A law passed in August 2008 clearly says schools must accept children with or without a propiska. But school directors say they have no space. Parents hear a rumor that children are not being taken at a school, so don’t take them for registration and children miss years of their education this way,” he added.

The registration regime remains a major impediment to the free movement of citizens within Kyrgyzstan. Even so, defenders of the status quo insist that propiskas are necessary to maintain law and order. “But look around, many have propiskas and still we have lots of problems with crime and drugs,” Kotova said.

“Politicians and officials of different ranks do recognize the fact that the propiska system is not effective in developing democracy and a free market,” she said.

Chinar Mamatbekova, 49, a mother of nine, would benefit from a change in the residency-permit system. She receives none of the social support due a parent, such as the $7 per month, per child that the state normally provides to needy mothers. Her twin eight-year-old boys scamper around with runny noses while she cooks in a pit outside her Ak-Jar home.

A truck comes and sells water for one som (2 cents) per liter. Sometimes it doesn’t come.

“I am very ashamed in front of my kids, how will we look into their eyes tomorrow? Although, they are so small, they are still asking: why do we live here without water and electricity, mom?” Mamatbekova said.

Though the state is slow to initiate change, it too would benefit from abolishing the propiska system, Kotova contended. “The fact that internal migrants cannot obtain a propiska does not prevent them from moving to Bishkek anyways. That means thousands of people are involved in the black economy and do not pay taxes,” she noted.

Men from Ak-Jar reportedly contributed to the ethnic violence in Maevka that left five dead on April 19. Men from the neighborhood say they are simply eager to find better land. [For background see EurasiaNet's archive].

The novostroiki settlements are a challenge the interim government must address, Kotova said. The situation “may create serious tensions in Bishkek and public disorders in the near future. People who have no legal instruments to claim their basic rights can go far in demanding a decent life for their children,” she added.