The 20-year-old informant for Russia’s security services was sent to Tbilisi to report on the many exiles here. Now, he says, he’s come clean. 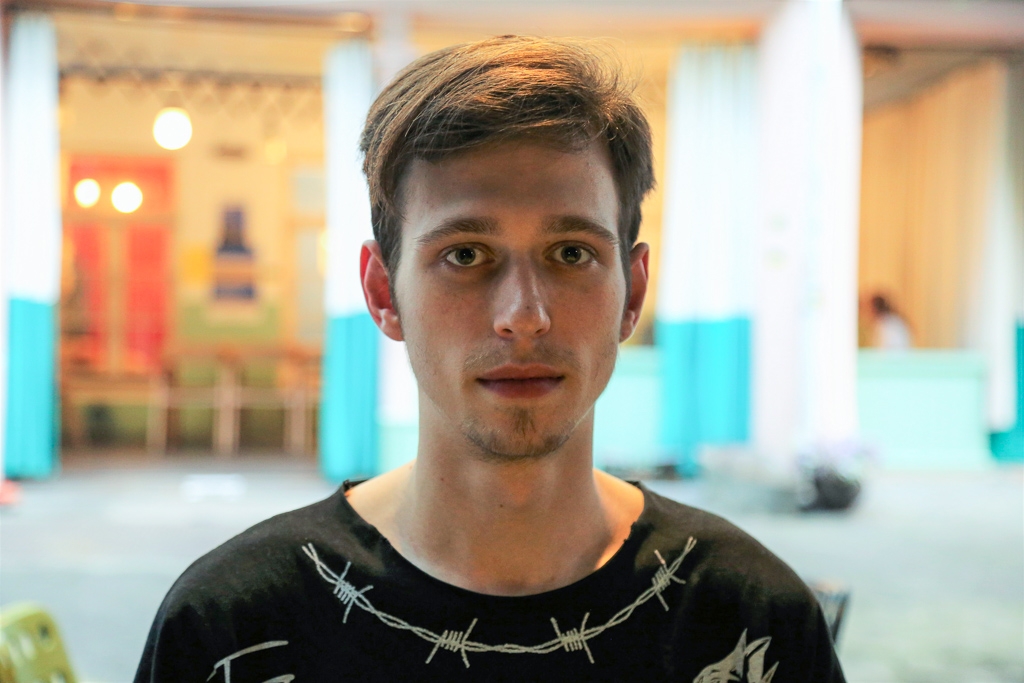 Osipov: In from the cold (photo by Giorgi Lomsadze)

Last month, Vsevolod Osipov was unmasked as an informant for Russia’s security services. He had been sent to Tbilisi to monitor the many Russian dissidents who have flooded the Georgian capital recently.

But he says his new notoriety hasn’t much affected his life here, and done little to scare away patrons – primarily Russians themselves – at the busy wine bar in central Tbilisi where he works as a sommelier.

“An occasional customer who recognizes me from the news stories may come up and ask questions, but beyond that I don’t get much attention,” Osipov told Eurasianet.

In mid-July, the Russian independent news website Meduza published a lengthy piece about Osipov. In it, the 20-year-old Muscovite admitted to working for the Russian Federal Security Service (FSB): first in Moscow to report on the libertarian party of which he was a member, and then in Tbilisi.

The young spy’s confession, which was then rereported in several other media, would seem to be big news in Georgia, where concern about the large influx of Russians is keen. But it’s barely made a ripple.

“I thought that the Georgian police would show up to question me, but nobody seemed to care, except maybe an occasional reporter,” Osipov said, with a smile and a faint note of disappointment.

Osipov’s story did prompt a concerned social media buzz among Georgia’s fast-growing Russian community. Georgia began filling up with arrivals from Russia last year, when the Kremlin started an intensified crackdown on so-called “foreign agents” there. The stream became a flood following Russia’s war on Ukraine, when the crackdown got even harsher and the emigres were joined by other professionals whose livelihoods were threatened by international sanctions against Russia.

Even as they flock to Georgia, many Russian dissidents do not feel entirely safe here. In apparent fear of angering the Kremlin, the Georgian government has blocked the entrance of several well-known opposition personalities. Some worry that the Georgian government may be coordinating with Moscow. These concerns were only corroborated by Osipov’s story.

For many Georgians, meanwhile, the news hardly came as a surprise. Lots of Georgians oppose the flow of Russian migrants, believing that among the flood of digital nomads, journalists and dissidents, nefarious elements are sneaking through as well.

There is some truth to this assumption, Osipov said as he spoke with Eurasianet at a popular restaurant a few blocks away from where he works, in Tbilisi’s Sololaki district, where many of the young, liberal Russians have flocked.

He says he knows at least two more individuals who came clean via social media about traveling to Georgia to spy, and thinks he has spotted a few others. “You are not given identities of other agents, but if you look close enough you can guess who they are,” he said.

“Before coming here in October, I had a pre-departure briefing in Moscow, where they told me to go cafés and restaurants in Tbilisi frequented by the Russians,” Osipov recalled. “I wasn’t supposed to ask any questions or go out of my way to meet people, just observe and keep my thoughts to myself. Then, once a week, I was supposed to report to my coordinator what the general scene was like and if I had picked up on anything important.”

“But after the war started, I began noticing some people who didn’t have the patience to play the slow game,” he said. “They were showing up at bars and parties, struck up conversations and almost immediately asked to be added to group chats and social media groups. Some would get really drunk and blow their cover, or at least I could see it. I’d look at them and think: amateur hour.”

Being a bit of a greenhorn himself – he was only recruited last year – Osipov was also identifiable to a keen eye. Well before he went public, one heavily inebriated young Russian came up to him in a bar and said in a drunken slur that he knows who he really is.

Osipov was a law student and an activist with the small Libertarian Party of Russia (LPR) when he got arrested last year for participating in a demonstration in Moscow in support of jailed Russian opposition leader Alexey Navalny. Threatened with imprisonment, he was intimidated into serving as a mole in the LPR and another opposition group, he says, adding that that is how many young people get caught in the FSB net.

After he performed his first, trial assignment to his handlers’ satisfaction, he was awarded with a bigger assignment: go to Georgia. “They gave me 214,000 rubles [about $3,550] to spend for a month and a half,” Osipov said. “I was supposed to go back to Moscow in December as, I guess, they were still testing me.”

Osipov was tasked with spying on two people in particular: self-exiled chairman of the LPR, Yaroslav Konvey, and Anton Mikhalchuk, a manager with the opposition group Free Russia Foundation. Upon his arrival, Osipov says he went directly to the two and told them outright that he was recruited by the FSB. He says he was trying to warn the LPR leadership all along, but failed to arrange a tête-à-tête with them until he arrived in Georgia.

He offered to send false info back to his superiors and throw them off the track, but they appeared to be mistrustful and spread the word among their colleagues about an informant in their midst, Osipov said. Word soon reached Osipov’s girlfriend, who runs a tiny bar in Tbilisi. She asked him directly if he was working for the FSB. “I said yes, as I realized that she must’ve heard about it from the people I trusted,” he said.

Osipov continued reporting back to Moscow and convinced his handlers to extend his stay in Georgia. “I loved the city and had a good life here, so I did my best to stay as long as I could and have the FSB pay for it,” he said. Even his handlers appeared curious about vacation options in Georgia: on top of his main job, he says, they asked him to collect intel on nice bars and landmarks worth checking out.

Following Russia’s invasion of Ukraine, the handlers did not need much convincing to extend Osipov’s stay further.

“With so many people coming, they needed more eyes on the ground,” Osipov said.

Infuriated by the war, he stopped responding to his handlers in March, Osipov says. In June, he spoke to Meduza, which fact-checked his claims, found his handlers and published their identities, and also spoke to the activists that Osipov was supposed to follow. Meduza also published screenshots of Osipov’s chats with his FSB bosses.

The story still raised question marks among some Russians in Georgia. Some were surprised by Osipov’s choice to try to pull one over on Russia’s formidable security service, though others put it down to his young age. Osipov says that he is indeed worried about the potential of FSB revenge, especially given that his mother remains back in Moscow; but he’s not so concerned about himself.

“I don’t think I’m that important for them to come chasing me here,” he said. “And I can always move to the next place.”