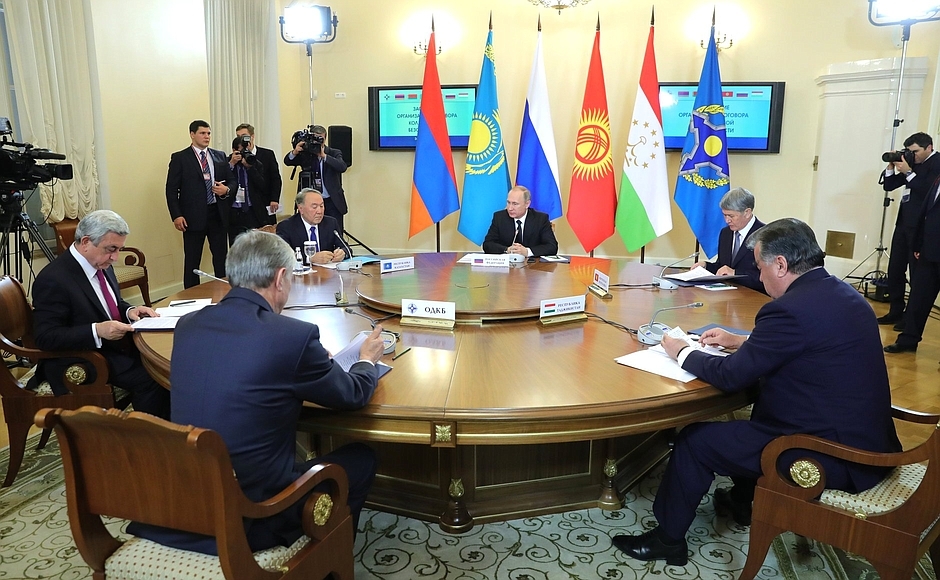 Heads of state of CSTO member countries meet at a summit in St. Petersburg. There was a bit more room at the table than planned as Belarus President Alexander Lukashenko skipped the event. (photo: kremlin.ru)

Dissension among the nominal allies in the Collective Security Treaty Organization, the Russia-led post-Soviet security bloc, continued to deepen at this week's summit, where Belarus was conspicuously absent and accusations were raised of a conspiracy against Armenia.

The CSTO summit was held in St. Petersburg on December 26, and the big news was that Belarus President Alexander Lukashenko was absent. Lukashenko gave no public explanation for his absence though Russian President Vladimir Putin's spokesman, Dmitriy Peskov, played it down saying that "our Belarussian colleagues warned us that Lukashenko may not be able to take part in the summit."

There were two potential explanations for Lukashenko's move, not necessarily mutually exclusive. One was that it had to do with Russia-Belarus bilateral relations, and that this was just the latest expression of Lukashenko's discomfort with Russia's tight embrace. "This move seems to be yet another caprice by the Belarusian leader, demonstrating his attitude toward the integration projects that Russia is trying to create in the post-Soviet space," said Bogdan Bezpalko, the deputy head of the Center for Ukrainian and Belarusian studies at Moscow State University. (The CSTO summit was held concurrently with one of the Eurasian Economic Union, the Russia-led economic bloc; the rosters of the two organizations substantially overlap.)

The other, more intriguing explanation, was that it was somehow aimed against Armenia. This theory seems far-fetched, but it's been embraced by a wide spectrum of commentators. Under this theory, Azerbaijan is trying to foil the CSTO's efforts to name a new secretary general, a post that has been promised to Armenia. This is, by The Bug Pit's count, the fourth time that the organization has promised to name a new head by a specific date and then failed to do so. The last time, in October, was at another CSTO summit, and the official reason for the delay that time was that Kazakhstan President Nursultan Nazarbayev was unable to make it to the meeting. The circumstances around Nazarbayev's absence were also vague and suspicious, and that this has now happened twice in a row has set off some alarm bells.

Both Belarus and Kazakhstan have ties to Azerbaijan that could be stronger than their nominal CSTO alliance with Armenia. Kazakhstan has long tended to take Azerbaijan's side against Armenia over the disputed territory of Nagorno Karabakh. And Belarus has been noticeably warmed with Azerbaijan in recent months, including a friendly visit by Lukashenko to Baku in November.

"Russia has a central role in these organizations but Belarus and Kazakhstan are neither voiceless, nor weak-willed," wrote Armenian commentator Hakob Badalyan after this summit. "Both Astana and Minsk play against Armenia, this is beyond doubt. To put it in a different way, the membership of Armenia to [the Eurasian Union] and CSTO enables Astana and and Minsk a wider scope of acting against Yerevan. They are using this possibility openly and cynically."

CSTO outgoing secretary general Nikolay Bordyuzha promised that the group would finally name his replacement at another summit this spring, and a commentary in Regnum.ru argued that this was a critical juncture for the organization: "Before the spring CSTO summit, in addition to Belarus and Kazakhstan, Russia also needs to clearly speak out on the issue of naming Armenia's representative to the post of secretary general. If this doesn't happen, we can write off the CSTO, since Azerbaijan, which isn't a member of the organization, may influence the leadership of the military alliance more than some of its members."

In this context, it's interesting to look at the CSTO's response to a December 29 outbreak of fighting on the Armenia-Azerbaijan border that resulted in the deaths of three Armenian soldiers. The CSTO tends to be fairly circumspect about these sorts of things, in spite of the fact that it is in theory on Armenia's side. But in this attack, the CSTO put out a relatively strongly worded statement condemning the "provocation on the territory of a CSTO member state" and referring to the de facto state in Karabakh as the "Nagorno Karabakh Republic." This, in turn, was criticized by Azerbaijan's foreign ministry. Did the CSTO/Russia feel it had to throw Armenia a bone? Or take Azerbajian down a notch?

Anyway, it's also worth noting that Bordyuzha said earlier this month that one of the main items on the summit agenda would be how the CSTO could better counter NATO. That's a stance that none of Russia's CSTO allies are enthusiastic to take, and sure enough, not a word appears to have been said (publicly, anyway) about NATO at this summit.

In sum: the CSTO appears to be unraveling. Let's see what happens in the spring.