Stepanakert prepares for the last stand

As Azerbaijani forces close in, Karabakh’s Armenian population hunkers down. 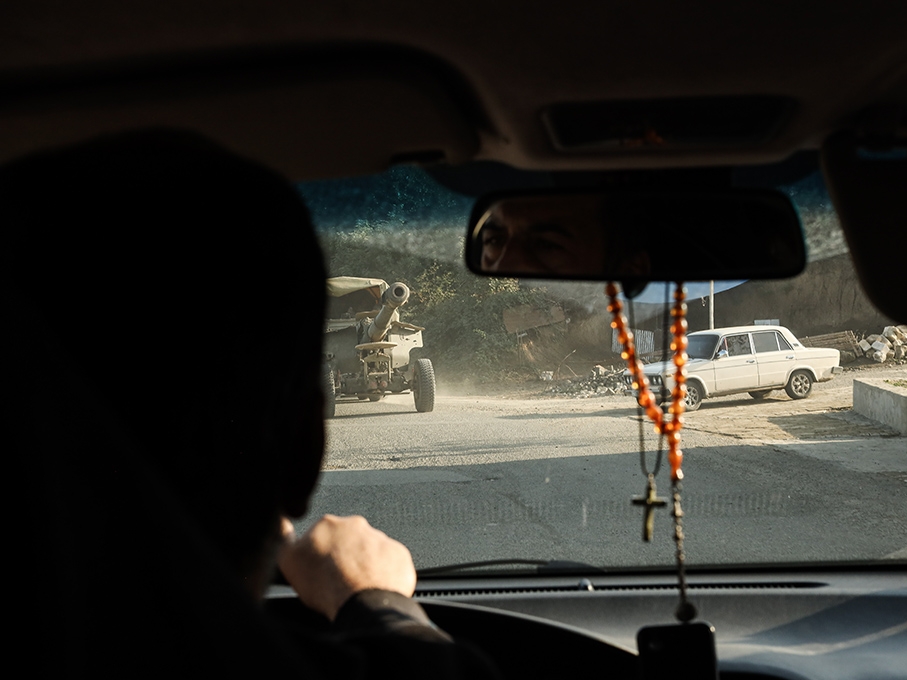 We were barreling toward Shusha, in Nagorno-Karabakh, and all along the roadside Armenian soldiers were digging trenches in apparent preparation for the defense of the road, the vital supply corridor for Karabakh’s embattled population.

Directly across the steep valley, the forests on the surrounding mountains were on fire, possibly the result of white-phosphorus shells dropped by Azerbaijani forces to try and flush out Armenian units who were using the forest as cover from drones. The soldiers on the roadside peered at the scene through binoculars, intently monitoring what seemed to be a developing situation in the valley.

One of the fellow journalists in our car had been here just two weeks before and said the situation had dramatically changed since then. “This feels different than last time,” he said. “Let’s see what Stepanakert looks like.”

This was November 3. For several days, Azerbaijani forces had been within about five kilometers of Shusha, clashing with Armenian units in hand-to-hand fighting in the forest. While, the close proximity of the Azerbaijani forces was alarming to those in Shusha, as well as those in the nearby regional capital of Stepanakert, most of us believed that these were small commando units sent to harass the Armenians and that they did not pose a major threat.

But the scene on the road suggested that things were a little less under control than imagined.

As we wound around the base of Shusha’s dramatic cliffs and descended the valley into Stepanakert, we found the city calm and bustling. In spite of the constant threat of Smerch missiles and suicide drones, adults of all ages milled around, buying groceries and running errands.

We got settled and went out to eat. As soon as we sat down, the earth began shaking with the rumble of heavy shelling in the near distance. It was coming from the direction of Shusha.

Even on the ground in Nagorno-Karabakh, reliable information can be hard to come by. Rumors swirl, people with contacts at the front receive conflicting news, and the local government tries to maintain a positive face and downplay negative developments.

Late the next morning we got word that the road that we had come in on had been shut down by Armenian forces as a result of clashes around Shusha. With that road, known as the Lachin corridor, the only (relatively) safe way in and out, we were effectively stuck in Karabakh.

Initially we were told that Armenian forces were launching an operation to ‘cleanse’ Azerbaijani commandos from the valley and neutralize any threat to the Lachin road. As the day progressed, the shelling only became more intense. Rumors started arriving that the Azerbaijanis in the valley were actually a more sizable fighting force than previously thought and that they included Syrian mercenaries. We weren’t able to verify any of this, but whatever was going on was serious and the mood was bleak.

Groups of foreign and Armenian journalists waited for any information and nervously discussed possible options to get out. Local authorities claimed the road would be reopened shortly. But a dark resignation began to show on the faces of officials and civilians around town. It started to feel that the war was closing in on Stepanakert.

Nervous about the situation, our group gathered at the hotel bar to discuss a contingency plan. We debated whether we should leave immediately on an alternative northern road or wait until morning and continue working in the meantime.

At a neighboring table, a burly Armenian man in battle fatigues was smoking a cigarette and listening to us talk. We asked him what he thought: should we leave?

“It all depends on what your mission is,” the man, Artur, said. “This is a fight for our survival and it is important for you to be here to show what is going on. My mission is to hopefully be a hero for my motherland. What is your mission?”

One of my colleagues answered: “We want to cover what’s happening here to a point that we can cover it. If we’re dead, we’re no use to anybody”

“There are many journalists still here reporting and I consider them heroes, not for Artsakh [Nagorno Karabakh], but for their profession,” Artur answered back. “If you leave, no one will know what is happening here. You should stay.”

The conversation was respectful, but we knew Artur was coming from a different reality. Armenians have paid in blood to stay in Karabakh. Nearly every family in the enclave has lost members to war and their conviction is unwavering.

Deciding to stay the evening, we visited a basement shelter where some elderly Karabakhtsis have been living since the war began. “My son was injured in the first war [in the 1990s] and my grandson was killed in the second [2016],” said 70-year-old Arageh. “My sister’s son was killed…I have six men from my family on the frontlines at this moment.”

Across the room another woman chimed in: “Journalists always come here and talk to us, but the world doesn’t listen to us, do you think talking to you will save us?”  A bitter and tearful 84-year-old, Isabella, declared: “I have always lived here…this is my land. My house has been damaged, I have nothing, but I will never leave.”

In the streets outside, it started to feel that a last stand was near.

Local Armenians likely will fight to the last man. This is a war built on layers of brutality. The Karabakh conflict of the 1990’s saw cruelty visited by both sides on each other. Armenians living in Azerbaijan were forced to flee to Armenia and vice versa. The eventual Armenian victory in that war resulted in the exodus of more than 600,000 Azerbaijani civilians from the newly captured territories. The Azerbaijani mood is vengeful, and should the effort to take back Karabakh succeed, it is likely the Armenian presence in Karabakh will end.

After another long night of shelling, a couple of us made an early morning attempt to leave Karabakh by the alternative, northern road back to Armenia. Other colleagues chose to stay.

After a tense drive, scanning the skies for Azerbaijani drones and artillery, we arrived to the safety of Armenia’s Lake Sevan.

Checking the news from Stepanakert, it was getting more dire: The city was suffering under an unprecedented level of shelling.

Adrian Hartrick is a filmmaker and writer focused on the Middle East and the Caucasus.