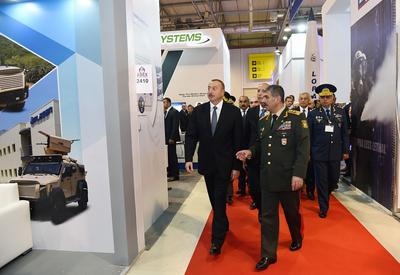 Azerbaijan is facing a large decrease in its military budget as state revenues continue to suffer from low oil prices.

According to budget documents released last week, Azerbaijan is budgeting 1.62 billion manat for defense in 2017, down 27.5 percent from the projected spending in 2016. And that doesn't take into account the declining value of the manat, which will make buying equipment from abroad even pricier.

Keeping track of Azerbaijan's defense budget is as much an art as a science, and another complicating factor has been the "special projects and activities" line in the budget, which had funded military procurement from 2011. It disappeared last year, and this year remains out of the budget. Adding to the confusion, most media reporting on the budget appear to have used a figure of 2.9 billion manat for 2017, but that is the combined figure of defense and internal security spending.

The cut in defense spending is nearly three times the overall decrease in spending, about 10 percent.

Azerbaijan's massive arms budget has been a cornerstone of the government's efforts to take back the territory of Nagorno Karabakh, which it lost to Armenian forces during a war as the Soviet Union collapsed, either by force or by forcing Armenians to negotiate.

“It is our priority and we will continue to increase military spending," said Azerbaijan President Ilham Aliyev in 2014. "Over the past 10 years, our military spending has increased more than 20-fold, and our spending allocated to the armed forces is approximately twice as large as Armenia’s overall state budget."

That has borne fruit, as the performance of Azerbaijan's armed forces in the "four-day war" in April of this year surprised many observers. And it's possible that Azerbaijan's arsenal has grown to the point where a tapering off of acquisitions may be something normal, not just a response forced by poor economic circumstances.

Still, the recent appearance of new advanced Russian missile systems in Armenia's arsenal has apparently been the source of some concern in Baku, with the defense ministry saying it would "step up" weapons purchases in response, including looking at Pakistani missiles that are roughly equivalent to Armenia's new arms.

And last week, Azerbaijan held its second arms expo, ADEX 2016, which attracted arms manufacturers from around the world, including pavilions devoted to showing off the wares of the defense industries of Russia, Turkey, Israel, China, Belarus, France, and Pakistan. Azerbaijan wasn't just looking to buy, but also to sell, showing off new products like a joint Azerbaijani-Canadian armored personnel carrier, another domestically produced APC, and armed drones of which the Azerbaijani armed forces are reportedly buying "hundreds."

It remains to be seen, however, how a declining budget and weakening currency, may make all that a more distant prospect.