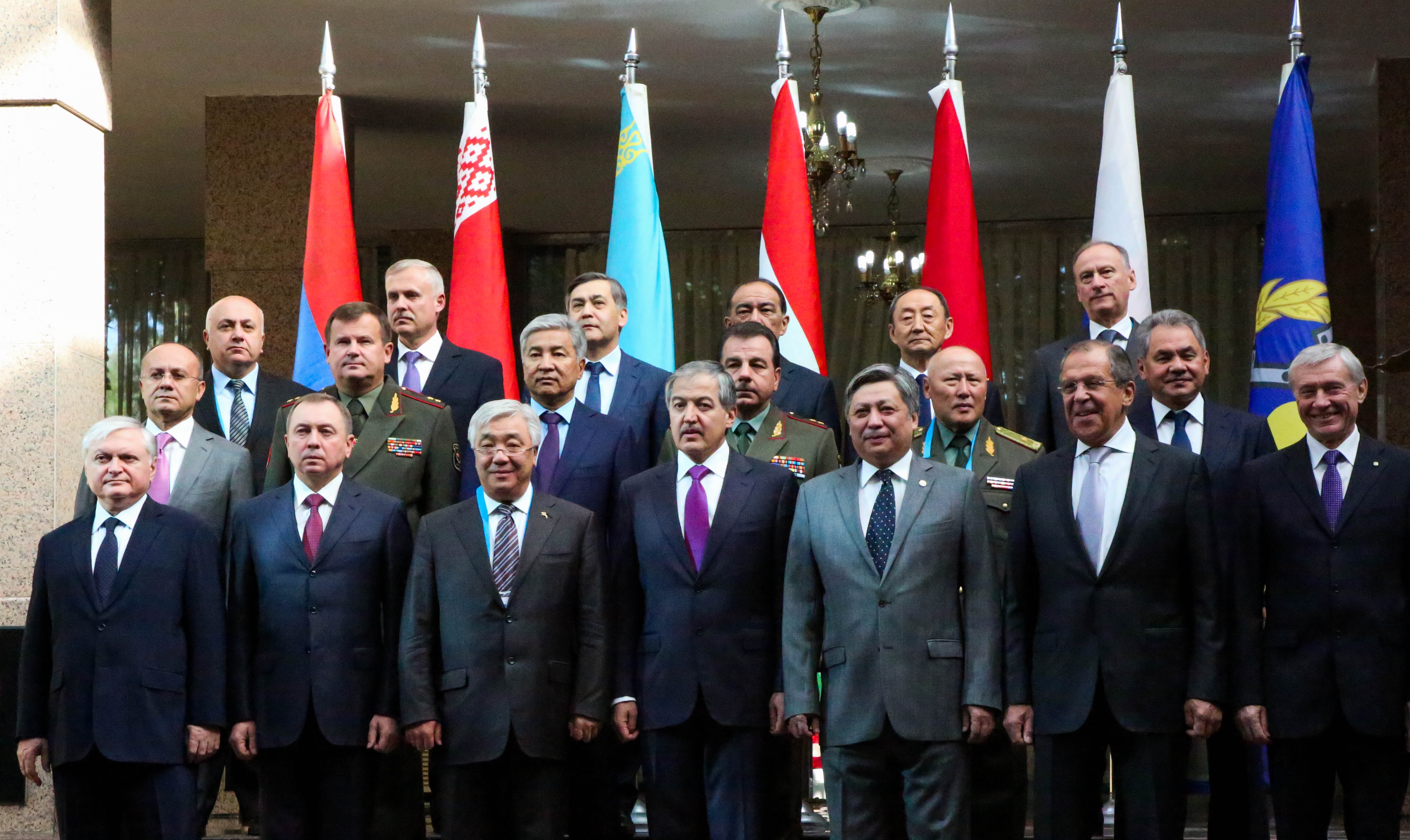 Foreign ministers, defense ministers and heads of security councils of CSTO member nations pose for a photograph ahead of a summit in Dushanbe, Tajikistan, on September 15, 2015.

As expected, anxieties about the claimed threat posed to Central Asia by the Islamic State group and other extremist outfits dominated talk at the Collective Security Treaty Organization (CSTO) summit in Dushanbe on September 15.

Host president Emomali Rahmon set the tone with his remarks.

“Tajikistan has drawn the attention of colleagues to the current situation in the region as a whole and in Afghanistan in particular,” he said. “The specter of emergencies and security threats in the region is not diminishing, and could even grow.”

It was Russian leader Vladimir Putin that made the point about Islamic State most forcefully.

“The risk of terrorist and extremist organizations making incursions into countries neighboring Afghanistan has increased. Moreover, this threat is made worse by the fact that along with the organizations known to be active in Afghanistan, the so-called Islamic State too has increased its influence,” he said during a heads of states meeting at the summit.

Out of the three former Soviet Central Asian states that border Afghanistan, only Tajikistan is a CSTO member. Uzbekistan and Turkmenistan have spurned the Moscow-led alliance.

Ahead of the summit, Russian newspaper Kommersant cited an unnamed CSTO official as saying the fight against the Islamic State has led member states to consider proposals on alliance contingents being deployed outside the organization’s borders to take part in an international coalition operating under the auspices of the United Nations.

Putin appeared to be alluding to such a possibility in his remarks.

“Basic common sense and responsibility for global and regional security demands that the global community unites in the face of these threats,” he said.

Such a prospect is unlikely to meet approval from the West, which is at loggerheads with the Kremlin over its explicit military assistance for the Syrian armed forces.

“Unfortunately, and we have to be honest and admit this, some citizens from CSTO member states are affiliated with the radical groups, they go to hotspots in the Middle East and Afghanistan to participate in illegal activities. This fact requires action on our part,” Nazarbayev said.

Kazakhstan is increasingly eager to be seen as a senior state in the region, so talk of security cooperation was also twinned with promises of other kinds of aid — to Tajikistan in particular.

“This year along, we sent our brother nation, foodstuffs and building material worth $2.7 million. Other measures of a similar scale are planned for this year,” Nazarbayev said.

Kyrgyzstan’s leader Almazbek Atambayev too referred to what he said were the wide-scale recruitment efforts by Islamic State.

“It is of particular concern that there have been numerous cases of recruitment of our citizens to participate in armed conflict with Islamic State, and of them subsequently returning to to continue their terrorist activities and recruitment in the countries of this region,” Atambayev said.

Kyrgyz authorities were quick to label a group of gunmen confronted in mid-July by security forces in a chaotic battle in the center of the capital, Bishkek, as members of an Islamic State cell. The government has not yet provided any compelling evidence for those claims, however.

Indeed, no Central Asian government has produced much by way of proof that Islamic State is operating in any substantial fashion within the region. Estimates vary wildly on the number of people from the region suspected to have joined the ranks of Islamic State, from the low hundreds to several thousand.

Also, recent events in Tajikistan have suggested that the Islamic State specter could potentially be exploited to crush what little dissent remains.

Speaking in the wake of unrest earlier this month, Rahmon said the alleged armed gang led by what authorities have cast as a renegade former deputy defense minister were “pursuing the same goals as Islamic State.”

On broader issues related to the operations of the CSTO, secretary-general Nikolai Bordyuzha said leadership of the organization would soon be organized on a rotational basis.

“In the past few years, the organization has gone through a period of development to create legal framework necessary for its activities,” Bordyuzha said. “In this respect, it is deemed appropriate to proceed further by introducing a system of rotation for the position of secretary general.”

Bordyuzha said the changes would be put into place by December.