The closure of the Lachin Corridor a week ago has left the region struggling to secure enough food, medicine and fuel. 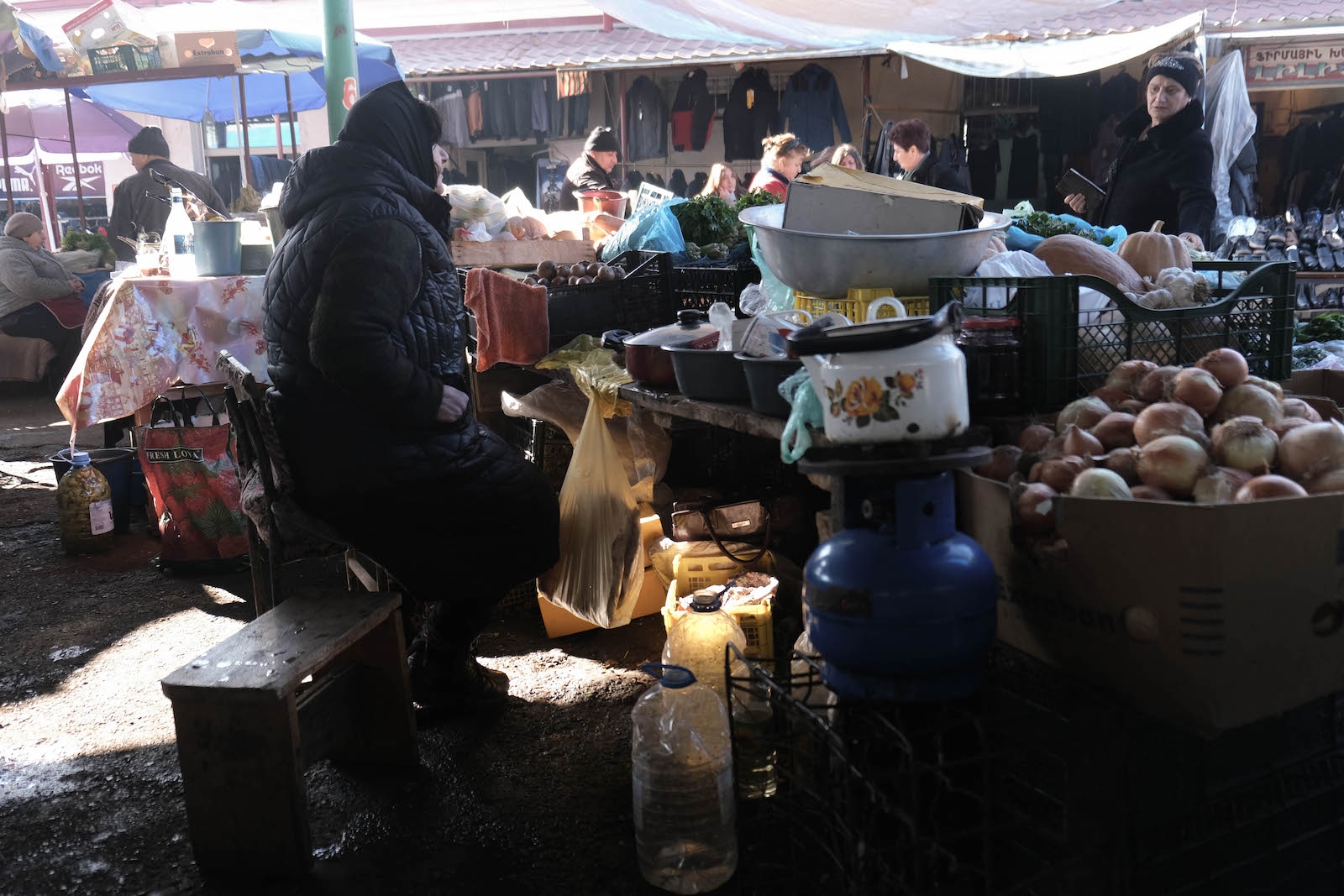 The market in Stepanakert is starting to thin out. (photo: Ani Balayan)

Pallets of dried fruit and nuts are piled up at Stepanakert’s central market, while cheery shoppers haggle over the bunches of radishes and spring onions brought in from nearby farms. But this is anything but a normal Sunday in Nagorno-Karabakh.

“There’s some fresh produce available,” one resident told Eurasianet by telephone, “but shelves with eggs and other things usually brought in from Armenia are now bare.” Meanwhile, food stands at the market fry up batches of jingalov hats, a flatbread stuffed with herbs that has traditionally been a way to use ingredients at hand in times of famine and war.

For an eighth day and counting, the only road in or out of the breakaway region has been closed off, and supplies of basic goods have started running low. On the morning of December 12, dozens of Azerbaijani self-declared environmental protestors pushed past barricades and set up tents on the Lachin Corridor, the key highway to Armenia. The ensuing standoff has held up deliveries of food and medicine, effectively cutting off the tens of thousands of people in Karabakh from the outside world.

“There is no access for any cars, including those carrying food and healthcare supplies,” Artak Beglaryan, an advisor to the State Minister of the self-proclaimed Nagorno-Karabakh Republic, told Eurasianet. “We don’t have any helicopters and the Azerbaijani side threatens to shoot down any flying object, so resupplying by air is not an option either. Every day, the humanitarian catastrophe is growing deeper.”

Ashot Gabrielyan, a teacher in the village of Kolkhozashen in Nagorno-Karabakh, is one of those on the wrong side of the blockade. After taking a trip to Yerevan to see family and friends, traveling through the Lachin Corridor, he is now unable to return. “I miss my home more than ever and I’m worried about my family and my students,” he said. “Usually people there are strong and courageous, but even if they don’t complain a lot you can tell that they are worried. There hasn’t been a panic, but people have rushed to stock up on food, and now they are struggling to find fuel for their cars.”

Supplies of natural gas to Karabakh also were reportedly cut off on December 13, with freezing temperatures on their way. Local officials claimed the move amounted to an energy blockade, but Azerbaijani state gas firm Azeriqaz chalked the disruption up to the cold weather and said repairs were ongoing. The flow of fuel resumed after three days.

Despite several reports in recent days that an opening of the road, too, was imminent, the blockade has continued uninterrupted. Social media videos from the scene show that the protesters occasionally move aside to let Russian military convoys pass, but Beglaryan said that the peacekeepers have not been bringing in any humanitarian aid and discussions with international NGOs also have not yet led to a relief effort.

Several International Red Cross vehicles have since been seen moving through the corridor, and Azerbaijan’s Foreign Ministry on December 19 issued a statement in which they said humanitarian needs would be met, calling talk of a total blockade “fake news.”

Inside Azerbaijan’s internationally-recognized borders but controlled by its Armenian majority since a war as the Soviet Union collapsed in the 1990s, Nagorno-Karabakh again saw fierce fighting during a 44-day conflict in 2020. With the support of its ally Turkey, Azerbaijan’s armed forces managed to take back roughly three-quarters of the territory it had lost in the 1990s, leaving the Karabakh Armenians in control only of their capital Stepanakert, and a number of surrounding towns and villages.

As part of a Moscow-brokered ceasefire deal, Russian peacekeepers were deployed to hold the line and to oversee the flow of traffic on the Lachin Corridor. Now though, with the Kremlin distracted by its increasingly catastrophic war in Ukraine, it seems their ability to enforce the status quo is quickly collapsing.

The protests on the Lachin Corridor ostensibly began over claims that the Karabakh Armenians were “illegally” extracting gold from mines in the area and refusing requests for an inspection of the environmental impact. However, an investigation by RFE/RL found that few if any of those demonstrating have any record of eco-activism. Environmental slogans have given way to nationalist ones, and several of the protesters have been photographed giving the Turkish nationalist Gray Wolves hand gesture.

A number of foreign states have moved to condemn the blockade, implying that Azerbaijan is deliberately orchestrating the crisis. “The closure of the Lachin Corridor has severe humanitarian implications and sets back the peace process,” United States State Department spokesperson Ned Price said in a December 13 statement. “We call on the government of Azerbaijan to restore free movement through the corridor. The way forward is through negotiations.”

At the same time, the European Union, which struck a deal with Baku this summer to boost energy imports from the gas-rich South Caucasus state, has pressed the government to end the ongoing “distress to the local population” and reiterated the need for “dialogue and consultations with the parties involved.”

However, despite earlier claims from both Yerevan and Baku that a long-awaited peace agreement could be concluded by the end of the year, those hopes faded. In late November one senior Azerbaijani official told Eurasianet that “diplomatic options have almost been exhausted,” and hinted that they could apply pressure to the Lachin Corridor to help enforce their demands.

“The problem with the Armenian side is they always want to postpone things,” said Farid Shafiyev, a former Azerbaijani diplomat who now heads Baku’s Center for Analysis of International Relations, referencing thirty years of negotiations through the Minsk Group of the Organization for Security and Cooperation in Europe, which failed to reach a settlement on the conflict. “Now they want to postpone signing a peace treaty till next year. It’s not in our interests and we’re using the momentum.”

Azerbaijan denies that it has deliberately blocked the highway and claims it is Russian peacekeepers, rather than the protestors, who have put a stop to traffic. But state media and government spokespeople have repeatedly linked the standoff to their claims that Armenians are moving natural resources and military hardware, including landmines, through the corridor.

Likewise, Baku has linked the road’s status to that of the proposed Zangezur Corridor, a 35-kilometer stretch of land along Armenia’s southern border that Azerbaijan wants to use, without customs checks, to reach its exclave of Nakhchivan. Yerevan argues that the 2020 ceasefire agreement does not obligate them to allow that, insisting it only agreed to reopen its borders to traffic from its neighbor. “Our partial demands should be fulfilled, taking control of these gold mines and getting control over who, militarily, is moving through Lachin,” Shafiyev said.

For the time being though, many Karabakh Armenians are defiant. “It’s like living in a cage – people are running around town looking for medicine while young mothers are helping each other get hold of baby food,” said Gaya Sarkisyan, a 28-year-old office worker from Stepanakert.

According to her, frustration is building – but much of it is aimed at Azerbaijan and at the Russian peacekeepers that locals say aren’t doing enough to protect them. “Maybe all this is being done so we lose Moscow as an ally? Maybe this is part of Azerbaijan’s plan? People here ask questions like that all the time. And we can’t afford to have the wrong answers because this is a high-stakes game and staying a few steps ahead is the only way to survive.”

This piece was updated to include the Azerbaijan Foreign Ministry statement of December 19.