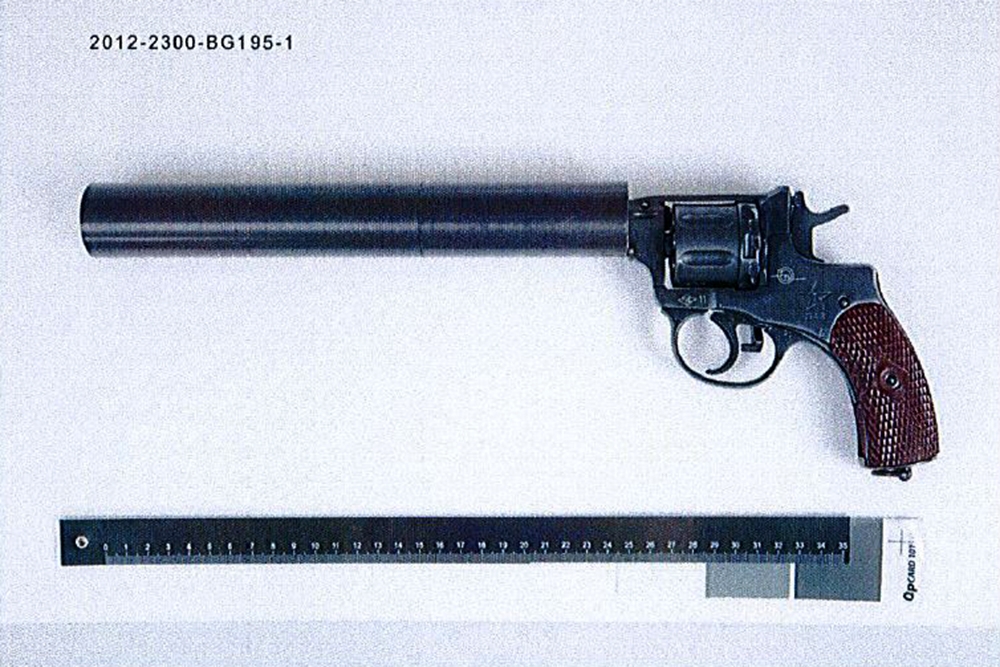 Prosecutors presented a photo of the revolver and noise suppressor they claim was used during the 2012 assassination attempt of Obidkhon Qori Nazarov, an Uzbek imam who has been outspoken against the Uzbek government, in Strömsund. A court in Östersund is this week trying Yury Zhukovsky, an Uzbek citizen, for the attempted murder under the further accusation by the Swedish prosecutor’s office that the hit was ordered by the Uzbek government. (Photo: Swedish Prosecution Authority)

A prosecutor in Sweden has dubbed Uzbekistan a “gangster state” for what he says was its role in the shooting of an Uzbek dissident cleric living in the Scandinavian country.

Chief prosecutor Krister Petersson made the accusation during the first day of the trial of Yury Zhukovsky, an Uzbek citizen accused of attempting to murder Obidkhon Qori Nazarov in 2012.

“What we are talking about is an attempted murder, and in my opinion it has its roots in Uzbekistan,” Petersson said in his opening statements November 23 at the trial at the Östersund District Court in Sweden. The court is trying 37-year-old Zhukovsky for attempting to murder Nazarov — a persistent critic of the Uzbek regime —  by shooting him in the head on the stairs outside his apartment in the remote town of Strömsund.

In one recent case, in December 2014, Abdullah Bukhari, a conservative Uzbek cleric who inveighed against Karimov’s regime from exile, was gunned down in Istanbul. Some believe Uzbekistan may have been behind that killing.

On the opening day of his trial, Zhukovsky denied the accusations of attempted murder through his lawyer Jorge Concha.

In an interview with EurasiaNet.org, Petersson said that this might be the first case in Sweden involving a political assassination attempt on Swedish soil. “I’ve never had any case like this when it’s been so obvious that the killer came from a foreign country and acted on that country’s behalf,” he said. “I don’t know if there are any spy cases, but I haven’t heard of anything like this before.”

In court, Petersson showed video footage of Zhukovsky taken in a supermarket in Strömsund only hours before Nazarov, who served as an imam in the town, was found in a pool of blood. Just three minutes after the shooting, signals from Zhukovsky’s phone showed that he had already fled the town.

A bag found discarded outside the apartment, in which the silenced pistol allegedly used to carry out the crime had been carried, showed traces of Zhukovsky's DNA both inside it and outside it.

Petersson argued there were clear signs the crime was politically motivated, showing a 2004 report from Human Rights Watch that described how Nazarov, a prominent cleric in the 1990s, had been branded an “enemy of the state,” and called a “Wahabi,” a term widely used in Uzbekistan to mean religious radical, and then stripped of his post as imam at a leading Tashkent mosque.

Nazarov fled the country as a political refugee in 2006 after his family started being harassed, and in some cases imprisoned.

Before the trial, Petersson told EurasiaNet.org that he had warned Sweden’s Foreign Ministry that his evidence would point to the Uzbek government, giving diplomats time to prepare for any possible repercussions. “If I say that the authorities in a foreign country are criminals, it might affect diplomatic relations with that country,” he explained. “Under the Swedish constitution, I’m obliged to inform the Foreign Ministry.”

Arguably, the strongest indication of official Uzbek involvement, he said, was the Uzbek police’s suspicious cancellation of the Interpol arrest warrant it had issued for Nazarov. “They managed to get Interpol to put out an arrest warrant for this man — which said he was a terrorist who was responsible for an assassination attempt in Uzbekistan where 15 people were killed,” he told EurasiaNet.org. “And then, even though they hadn’t had an arrest, they withdrew the arrest warrant. Seven months later, this man was shot.”

He also pointed to the fact that Zhukovsky’s visas had been issued on the back of three recommendation letters from Tashkent’s Pakhtakor football club.

“I understand that it’s a big club with strong connections to the ruling party,” he said. “I have asked Uzbek authorities to carry out interviews with the leader of this club, but of course the Uzbek authorities haven’t done these investigations.”

Zhukovsky received a transfer of money while he was in Sweden from a Moscow-based company called Zeromaks, for which Zhukovsky claims to have worked.

Petersson conceded that he had not established any clear connection between the Moscow-registered Zeromaks and Zeromax, the Swiss-registered Uzbek conglomerate widely seen as having been controlled by Gulnara Karimova, the daughter of Uzbek president Islam Karimov. Zeromax went bankrupt in 2010, while Karimova has been living under house arrest after apparently falling out of favor in late 2013.

Finally, Petersson argued that the refusal of the Uzbek authorities to cooperate with his investigation itself was an indication of complicity. “For three years now, I’ve been trying to communicate with the judicial authorities in Uzbekistan, and the only reply I have gotten is a question on what legal grounds I wanted information on who was behind a bank account,” he said.

Nazarov’s son, David, interviewed by the local Östersunds Posten newspaper in the courtroom, said that he hoped that Sweden would prosecute the Uzbek regime. “The hit man is just a pawn. It was someone else who sent him,” he said. “The Uzbek regime is behind this and I hope that they will be prosecuted.”

He said it had been difficult to see Zhukovsky face-to-face for the first time. “It is not much fun. … There are no words to describe the emotions,” he said.

Petersson said that, given the refusal of Uzbek authorities to cooperate, the possibility of further prosecutions connected with the assassination attempt were unlikely. “The main thing is that the media writes about this and explains that this is a gangster state. I don’t think there will be any legal repercussions for Uzbekistan,” he said. “I don’t think the international court will take this up.”

On November 24, David Nazarov will take the stand representing his father, who suffered brain damage in the shooting and has yet to fully recover his speech. The court is set to hear Zhukovsky’s testimony later in the week. The trial is expected to last one week.

Richard Orange is a freelance journalist based in Malmö, Sweden, and previously worked as the Central Asia correspondent for The Daily Telegraph.