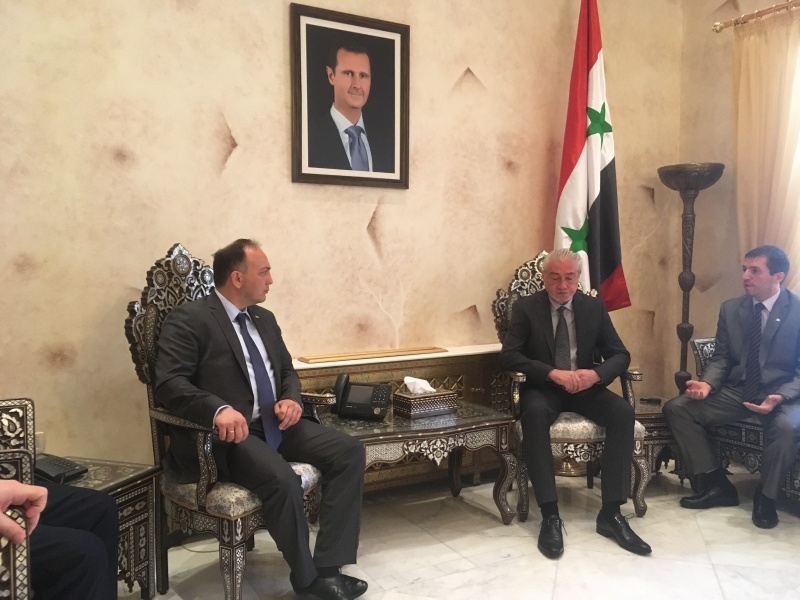 The Syrian government recognized the independence of Georgia’s breakaway regions Abkhazia and South Ossetia in a gesture of thanks to its largest patron of late, Russia. Georgia responded by severing diplomatic relations with Syria.

“In gratitude for the assistance against terrorist aggression, the Syrian Arabic Republic has decided to establish diplomatic relations with the republics of Abkhazia and South Ossetia,” Syria’s foreign ministry said in a statement issued on May 29, adding that embassies will open soon in both regions.

The twin regions that claim independence from Georgia published almost identical statements, announcing the launch of diplomatic relations with Syria and plans to open embassies in the Arab state.

Georgia's foreign ministry condemned the decision as a violation of international law. “With this act, [President Bashar al-]Assad’s regime supported Russia’s military aggression against Georgia, the unlawful military occupation of the Abkhazia and South Ossetia regions and the ethnic cleansing that has been going on for years,” said Deputy Foreign Minister Davit Dundua at a press conference following Syria's announcement.

Dundua said Georgia has launched the procedure of cutting diplomatic ties with Syria.

Syrian recognition comes as an apparent token of the Assad government’s appreciation of Russia’s military intervention against Syrian rebels. Georgia has long accused Moscow of enticing its allies to recognize the two Russia-backed entities in return for military, economic and diplomatic aid.

The two entities broke away from Georgia during wars in the early 1990s, as the Soviet Union collapsed. After the 2008 war with Georgia over South Ossetia, Russia recognized the two territories as independent states and continues to maintain a heavy military presence in both regions.

Moscow subsequently secured recognitions for South Ossetia and Abkhazia from Venezuela, Nicaragua, Vanuatu and Nauru, the world’s smallest island nation. Apparently caught between pressure from Russia and Georgia’s allies in the West, Vanuatu has retracted and reinstated its recognition several times.

Aside from the Russian connection, Abkhazia has its own ties with Syria. After the outbreak of the civil war in Syria, Abkhazia began a campaign of repatriation of the Abkhaz diaspora from Syria.

In a historic irony, the Abkhaz are in Syria because of Tsarist Russia's 19th-century campaign to conquer the North Caucasus, which resulted in millions of Abkhaz and other natives of the region fleeing to Turkey, Syria, and elsewhere in the Ottoman Empire.

Now, their descendants are being brought back to Abkhazia with Russian assistance. Many in Georgia proper believe that Syrian-Abkhaz are being settled in homes left behind by the thousands of ethnic Georgians who fled war in the territory in the 1990s.