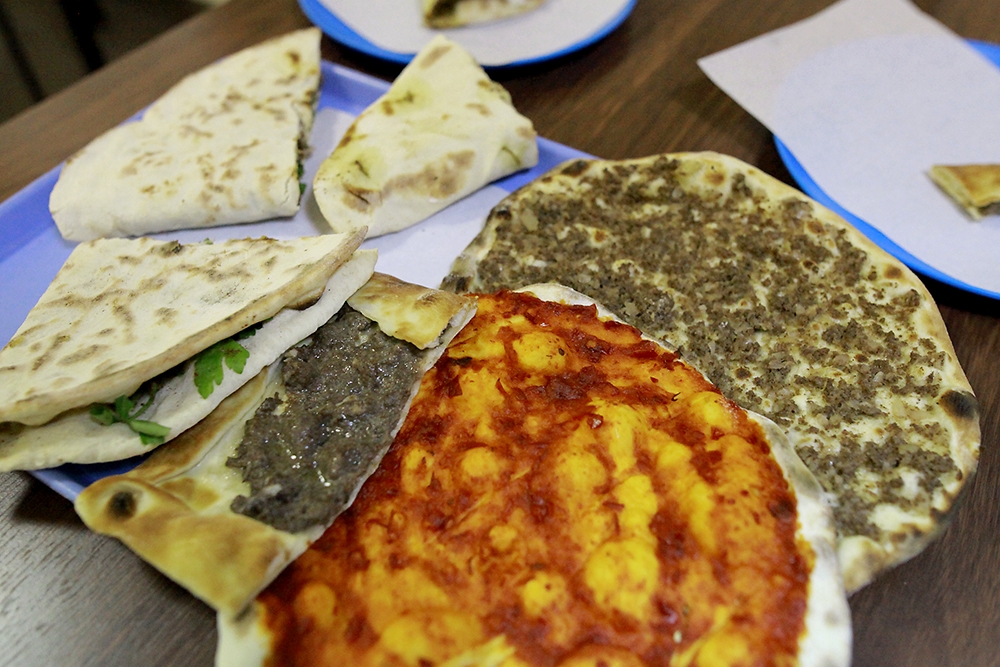 In honor of his ancestral homeland, Syrian-Armenian refugee Gaidzak Jabakhtchurian has named two of his lahmajoon after Armenia’s capital Yerevan and the northern city of Gyumri. (Photo: Emma Grigoryan)

The arrival of thousands of Syrian-Armenian refugees in Armenia is injecting a welcome dose of flavor into local cuisine, especially in the capital, Yerevan.

The food sector has become a means of survival for many of the 17,000 Syrian-Armenian refugees who have fled Syria’s civil war in recent years and who are now trying to make a new life in Armenia. In this spice-light South Caucasus country, generously spiced muhammara (hot pepper dip), lahmajoon (thin-crust pizza with ground beef or lamb), fattoush (a green salad topped with pieces of pita-bread), falafel (fried balls of ground chickpeas) and other Middle Eastern dishes have quickly gained popularity among Armenians.

“Syrian-Armenians were encouraged by the fact that locals warmly welcomed the tastes and the smells [of the cuisine] they brought with them, and that is why numerous Syrian-Armenians preferred to try their luck in the food sector,” said the United Nations High Commissioner for Refugees’ Yerevan-based foreign-relations coordinator Anahit Hayrapetian.

Approximately 50 Syrian-Armenian eateries, most of them modest cafes, are now operating in Yerevan, according to Hayrapetian. In addition, kiosks across the city offer spices commonly found in Syrian cuisine, and Christian Syrian-Armenian butchers sell halal meat, prepared according to Islamic law.

A metropolis of roughly 1 million, Yerevan has long featured Middle Eastern restaurants, many of them established by Diaspora Armenians from Lebanon and Iran. But never in this quantity.

At his lahmajoon bistro not far from the prime minister’s office, 28-year-old Gaidzak Jabakhtchurian, his head wrapped in a red kerchief, was busy applying a layer of spiced meat paste to a circle of dough. Four years ago, Jabakhtchurian left behind his two lahmajoon bakeries in the devastated city of Aleppo, a population center for Syria’s ethnic Armenians, and, with his four-member family and cars, moved to Armenia to start over.

“We thought that if we could bring our possessions [from the bakeries], it could help our new business, but it did not work,” Jabakhtchurian’s mother, Salbi Chilingarian, 52, recollected, tearing up at mention of Aleppo.

Instead, short on money, her son assembled some kitchen appliances by hand from scrap metal. The family knew little about Armenian society, and speaks a dialect of Armenian different from that of Yerevan or the rest of Armenia. Yet, they learned – especially about local food preferences. “Making our most famous lahmajoon, we made it less spicy,” recounted Jabakhtchurian. “We use our eight types of spices [paprika, black pepper, red-pepper paste, Aleppo pepper, baharat, cumin, and two “secret” spices], and … with them [Armenians] we are quite mild.”

One lahmajoon, big on the beef, is named for Yerevan; a second, made with onions and lots of parsley, for the northern Armenian city of Gyumri. The menu also features a yogurt soup based on one served by Jabakhtchurian’s grandmother to relatives at the start and end of winter. “That brings back very warm memories to me,” he said.

In Armenia, lahmajoon, found throughout the Middle East, is well known, and often called Armenian pizza. But locals note a difference with the Aleppo variety. “It was not until I ate a Syrian-Armenian lahmajoon that I first understood what that dish was supposed to be,” said Yerevan resident Gayane Blbulian. “It is a really crazy mix of flavors,” she laughed.

Aside from standard salt and pepper, Armenians tend to season food with paprika, chili, allspice or cinnamon. But, unlike elsewhere in the South Caucasus, heavier emphasis is placed on herbs – cilantro, parsley and basil, in particular.

The need for a wider variety of spices initially prompted 45-year-old Syrian-Armenian restaurateur Manushak Kirizian, a native of Aleppo, to import from Syria, but, as the war dragged on, she switched to Lebanon.

That was not the only change. Several years ago, she said, it never would have occurred to her that she would own a restaurant in downtown Yerevan. In Syria, she claimed, the Armenian community generally did not accept women working outside the home. A husband’s salary was deemed sufficient.

But in Yerevan, all that changed. Kirizian is the cook at her family-owned, high-end restaurant, Liban; her husband, Artsiv Itajinian, a former photographer-designer, is the manager. “It is a very unusual thing for our community, but we also are trying to overcome the difficulties and move forward step by step,” she said.

With multi-colored hookahs in the windows and Arab music playing in the lobby, Liban – named for Lebanon “so that people can taste a bit of our cousin’s cuisine” – serves up dishes, such as kebab with cherry sauce, which rely on common local ingredients.

In Kirizian’s view, the restaurant allows the family to maintain a link with its Syrian past, yet equips it for the future. “We lost everything, and now we are trying to bring our life back on its feet from nothing,” she said. “Today, Armenia is our home and we feel safe here.”