Much of last week’s cross-border violence between Kyrgyzstan and Tajikistan was unleashed by the armed forces. But mobs also rampaged through villages. 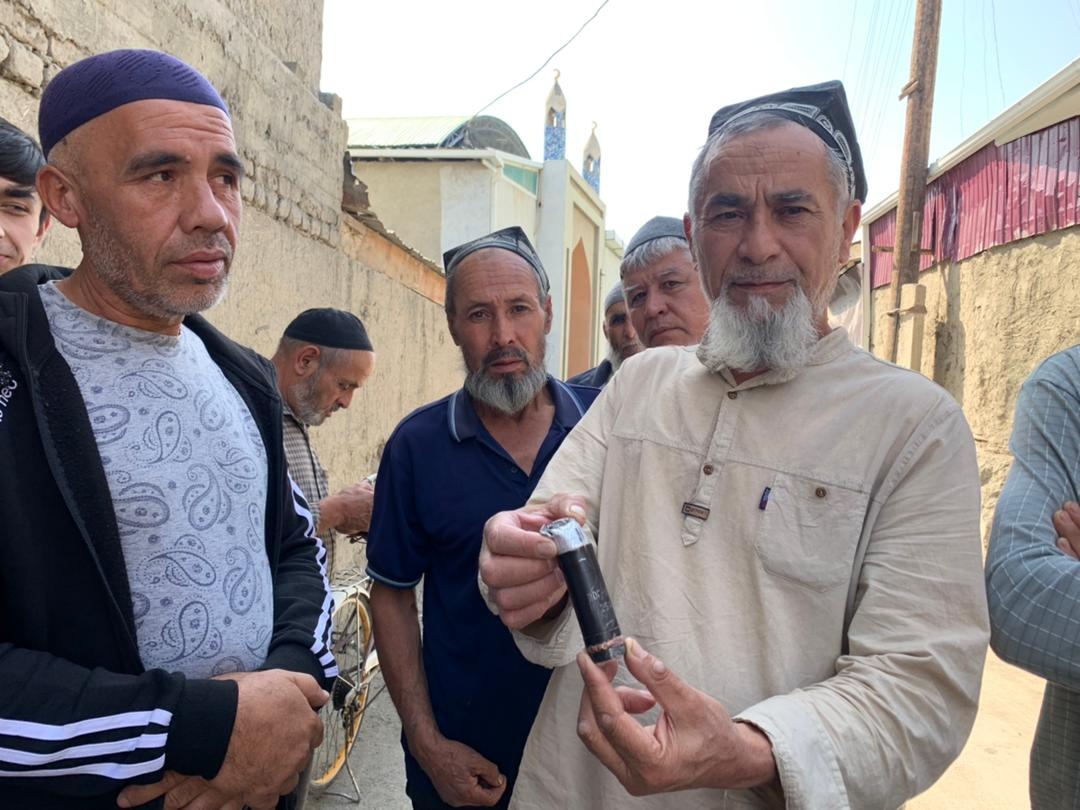 Men in the Tajik village of Tagi Dara show a piece of a projectile they found after the fighting. (Eurasianet)

The gunshots and screaming began around the time of the morning prayer on September 16.

Abroriddin Rozikkov, a 37-year-old resident of Somoniyon, a village on Tajikistan’s side of the troubled border with Kyrgyzstan, said his first thought was to wake his two sleeping children.

“I wanted to get in the car and drive away, but they burst in through our gate and started shooting. There was a man pouring gasoline,” Rozikkov said. “I abandoned the car and fled. Our family took shelter in a neighbor’s basement. We stayed there for 13 hours. When we came out, I saw that nothing remained of my home.”

Rozikkov could not identify the alleged attackers other than to say that they were Kyrgyz. He was unable to say with certainty whether he believed they were soldiers or civilians.

Stories like these, told to Eurasianet by multiple homeowners in Somoniyon and nearby areas, often closely mirror those told by people in Kyrgyzstan. Combined with the bulletins issued by Kyrgyz and Tajik officials alike, they attest to a chaotic and complicated picture.

Much of last week’s cross-border violence was unleashed by armed forces equipped with rifles, machine guns, mortars, vehicle-drawn artillery, and even armed drones. In several instances, however, mobs rampaged through villages. Both Kyrgyz and Tajik villages appear to have been targeted in this way. Some of the onslaughts inflicted by Tajik mobs were even filmed and distributed on social media.

A Eurasianet correspondent counted at least five homes in Somoniyon that had been burned down. Rozikkov said another 15 houses further down the road to the south had been destroyed too, but he cautioned against going there since doing so required using a road shared with Kyrgyz households. Snipers might have the area in their sights, residents warned. Other affected buildings in Somoniyon included a school for 200 children that was burned down entirely.

Such accounts may leave Kyrgyz officials unmoved. The State Committee for National Security alleged in a September 17 statement that Tajik citizens were setting fire to their own houses as a “deliberate provocation.” They alluded in that statement, though, to a town called Bogdari, which is around 20 kilometers from Somoniyon.

No clear or reliable information is forthcoming from the Tajik government about the exact death toll among their population. Officials have said 41 people were killed in the unrest between September 14 and September 17, but they give no specifics about how many among that total were civilians or soldiers. RFE/RL’s Tajik service has scoured social media accounts and official tallies to produce an even higher number of 59 dead.

In Kyrgyzstan, the latest government death toll for its citizens is 59.

A chronology of events provided by the government in Kyrgyzstan states that at exactly around the time Rozikkov says his home came under assault, a Kyrgyz border detachment outpost near the settlement of Eki-Tash, around 10 kilometers to the northeast of Somoniyon, was fired at by Tajik forces. Kyrgyz troops returned fire.

This clash occurred just a couple of kilometers from the Tajik town of Chorkuh.

It was possibly panic over this fighting that prompted 53-year-old Muhayehon Fayozova to seek some way of fleeing the town together with her two daughters-in-law and two children. Eventually, she found the driver of a Porter van who agreed to evacuate them along with 10 other villagers. The story of what happened to Fayozova and her family was shared with Eurasianet by her neighbors in Chorkuh’s Tagi Sadada neighborhood and corroborated by her daughter, Mubinahon Azamzoda.

One of Fayozova’s neighbors, Gulchekhrakhon, said she pleaded with her friend not to head out onto the road, that it was too dangerous.

“But Muhayehon [Fayozova] said that there were no men in their home, that she was afraid to stay there with a pregnant daughter-in-law and children. Just as we were talking, a shell hit the Porter and sprayed shrapnel at everybody,” said Gulchekhrakhon, showing the wound that she herself sustained.

Fayozova and her family got a lift to a local clinic for treatment for their injuries, but they were told they would need to make their way to a better equipped facility.

“My mother called me … and screamed that the children had been struck in their head with fragments,” Azamzoda, Fayozova’s daughter, told Eurasianet. “[Doctors at the clinic] told them that their situation was complicated and that they had to go to the city, to Isfara.”

And so the whole family, including one of Fayozova’s sons, who had now joined the group to assist, boarded an ambulance for the 20-kilometer drive to the north.

The ambulance is said by Tajik officials to have got as far as the village of Chorqishloq, about five kilometers short of the outskirts of Isfara, before it was struck. The Tajik Foreign Ministry said in a statement of protest that the Kyrgyz army had purposely taken aim at the civilian vehicle.

Fayozova and almost all the relatives traveling with her were killed, along with a paramedic and a driver, Tajik officials said. Her son managed to crawl in a daze out of the back of the vehicle and lost consciousness before it went up in flames.

“My older brother is still in shock, he can’t talk,” said Azamzoda. “They were in an ambulance. Nobody should have touched them. I just cannot understand how in one instant I have lost five members of my family, and I could not even say goodbye to them. They were incinerated, nothing is left of them.”

Residents of Chorkuh all agree shells started falling on their town as the morning prayers began.

“You couldn’t go into the street. Everybody who died or was wounded was hit as they were running away. Where was the guarantee that they wouldn’t shoot at your car when they even fired at an ambulance?” one resident, Maksudbek Azizov, told Eurasianet.

Shoista Jalilova, a resident of Somoniyon who shares her home with daughters-in-law and grandchildren, said she has been sleeping in her yard since March.

“It is so in case there are any signs of an impending war, I would have time to wake up the children and run to the basement of my brother, who lives three kilometers from us. I don't have my own basement,” Jalilova said.

Jalilova said she was prompted by rumors of commotion among the nearby Kyrgyz neighborhoods to make her way to her brother by around 4 a.m. on September 16, before the unrest began in earnest.

“We sat in the basement and talked to one another on the phone, trying to work out what was happening in which part of the village,” she said.