Supporters are growing an online network in the Tajik language. Many of the donors appear to be in Russia. 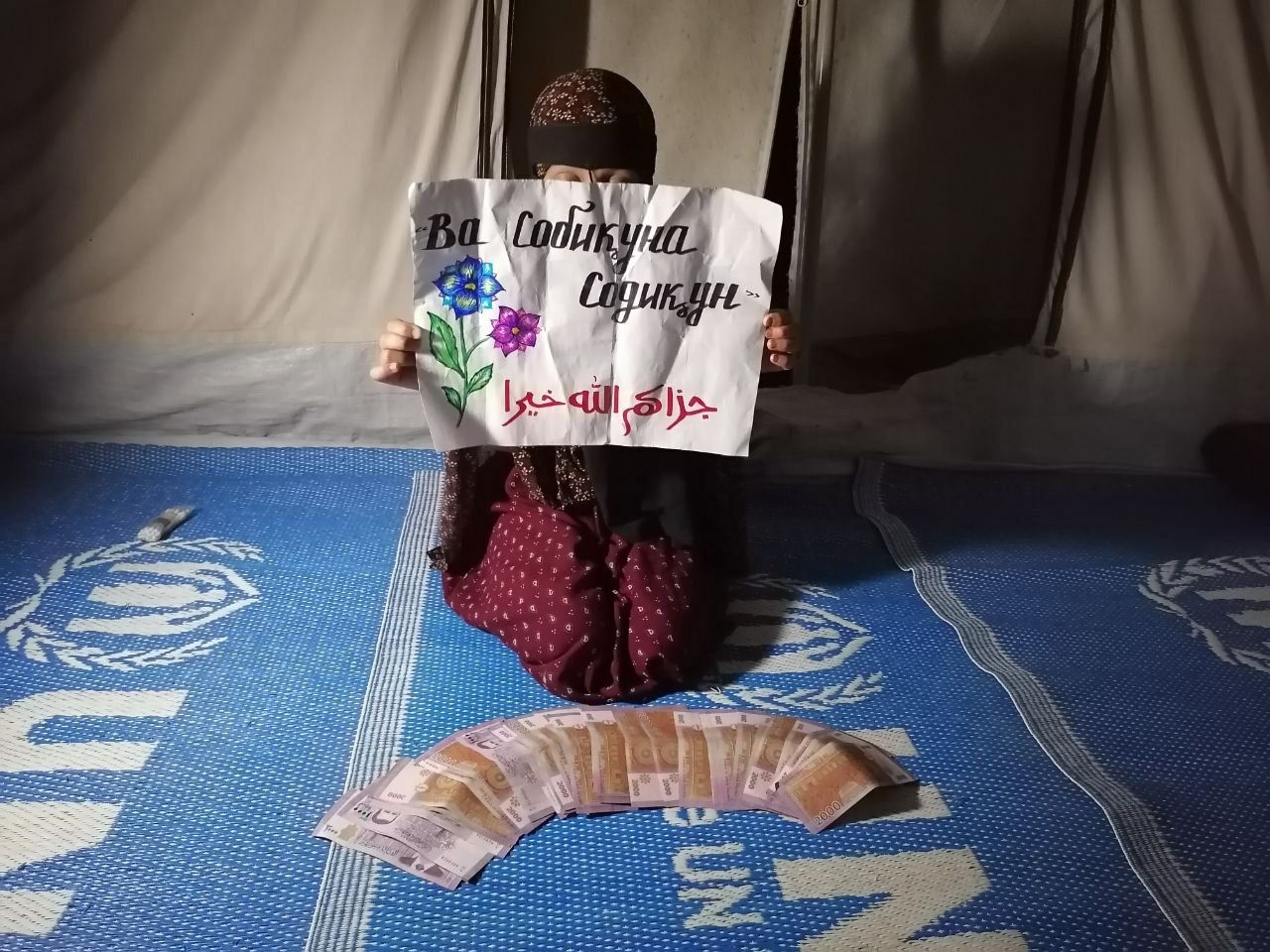 The Devotion and Loyalty channel on Telegram releases photos of recipients showing their funds, such as this girl with about $20 worth of Syrian pounds.

Tajik-speaking Islamic State recruiters say they are fundraising on a Russian payment platform.

A new Telegram group called “Devotion and Loyalty” is raising money for Islamic State Khurasan Province (ISKP) and the families of militants languishing in Iraqi and Syrian detention camps. Members use the financial services provider QIWI to make the transfers, according to images of receipts they post online.

Several thousand Central Asians joined IS and allied militants in the mid-2010s, traveling to the group’s stronghold in Syria and Iraq. A sizable portion of this group was recruited among migrant laborers in Russia; some brought their families and later had children in the group’s so-called caliphate.

After Western military intervention rolled back the caliphate in 2016-17, women and children were sent to prisons and refugee camps like Al-Hol and Roj in northern Syria. Today thousands of these civilians remain in conditions a March UN mission called “absolutely appalling.” Many are from countries like Tajikistan that are making halting progress returning their nationals. Radio Ozodi estimated in April that some 600 Tajiks remain in the camps.

Devotion and Loyalty encourages Islamic State supporters “to help captive families and children” in Al-Hol and Roj. A June 12 post describes how to transfer money through Russia’s largest bank, Sberbank, to the QIWI wallet, suggesting the target audience is in Russia. The group is unusual in that it communicates in Russian along with Tajik and Arabic – most connected channels post almost exclusively in Tajik. 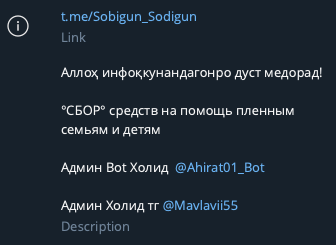 “Allah loves those who help others financially,” says the page description (right), which provides contact information for an administrator and a link to a bot for instructions about the financial contribution process.

QIWI digital wallets can be topped up with cash in rubles and other local currencies from the QIWI app, widespread in the former Soviet Union, and thousands of payment terminals throughout the region. (Cyprus-registered, Russian-run, Nasdaq-listed QIWI has not been targeted by Western sanctions related to Russia’s invasion of Ukraine. The company’s press office in Moscow did not reply to requests for comment.)

Devotion and Loyalty posts screenshots of the receipts – obscuring the location and other identifying details – to encourage others and confirm the transfer has been received.

For example, a June 3 post showed two transfers in Russian rubles to the group’s QIWI wallet, indicating the payments were made in Russia (QIWI-linked terminals in Tajikistan only accept Tajik somoni). Most transfers are small, under 1000 rubles ($17), though some are larger. Such amounts have likely evaded suspicion.

After the funds are received in Syria, administrators post photos of women and children, faces obscured, holding up placards with the Devotion and Loyalty channel name in Tajik and Arabic and with the Syrian pounds visibly displayed.

Devotion and Loyalty, which appeared last month, is closely affiliated with other Tajik-speaking Islamic State channels. It shares an administrator (“Mavlavii55”) with the ISKP-linked Sadoi Khuroson and Radioi Sadoi Khuroson Telegram channels. Mavlavii55 also is closely involved with a parallel channel, Protectors of the Ummat, that recruits for ISKP.

Devotion and Loyalty administrators also run a connected Telegram chat where Tajik IS supporters discuss the payments and justify violence against anyone who would keep Muslim women and children in such conditions. On May 31, for instance, Yusuf Tajiki, a prominent ISKP propagandist and recruiter, posted a video showing women in distress in one of the camps and called for revenge, telling his followers, “Take control of the situation yourself and start killing in your own country.” Other Tajik channels – such as Movarounnahr, Aqida and Ullamoi Rabboni – show solidarity by forwarding Devotion and Loyalty’s posts to their subscribers and urging supporters to donate. 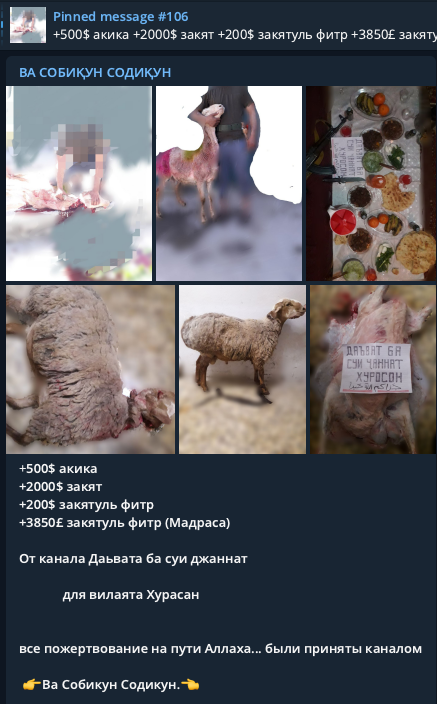 An April 25 post (right) said all donations “on Allah’s path have been accepted by the channel” and urged supporters to donate specific amounts earmarked for items to support ISKP’s campaign in Afghanistan. For example, $500 could be donated for aqiqah – the ritual slaughter of an animal such as a sheep or goat to feed the poor – to mark an occasion such as a child’s birth.

The post also recommends $2,000 for zakat, an annual charity payment made by able Muslims based on Islamic jurisprudence; $200 for zakat al-fitr to help the poor at the end of Ramadan; 3,850 British pounds for a religious school.

Though the amounts transferred so far are small, the payments represent a foundation for fundraising activities that will be difficult to uproot.

Even if Telegram bans the Devotion and Loyalty channel, as it often does when it discovers a channel violating its terms of service on spreading terrorist propaganda, it is playing a game of whack-a-mole. Channels rapidly proliferate on the decentralized and anonymous network; invitations to a new channel will quickly and efficiently pass among supporters who routinely create new channels in preparation for the next ban.

Other channels that have been banned, such as those that translate official IS media into Tajik, have shown this network capacity.

Though Devotion and Loyalty has not specifically sought funds to attack Tajikistan, it is logical to assume the network could leverage its reach, and intense hostility for the authoritarian government of Emomali Rahmon. Rahmon has become a poster child for Islamic State recruitment in recent months.