The president promised three years ago that everybody would get their money back. 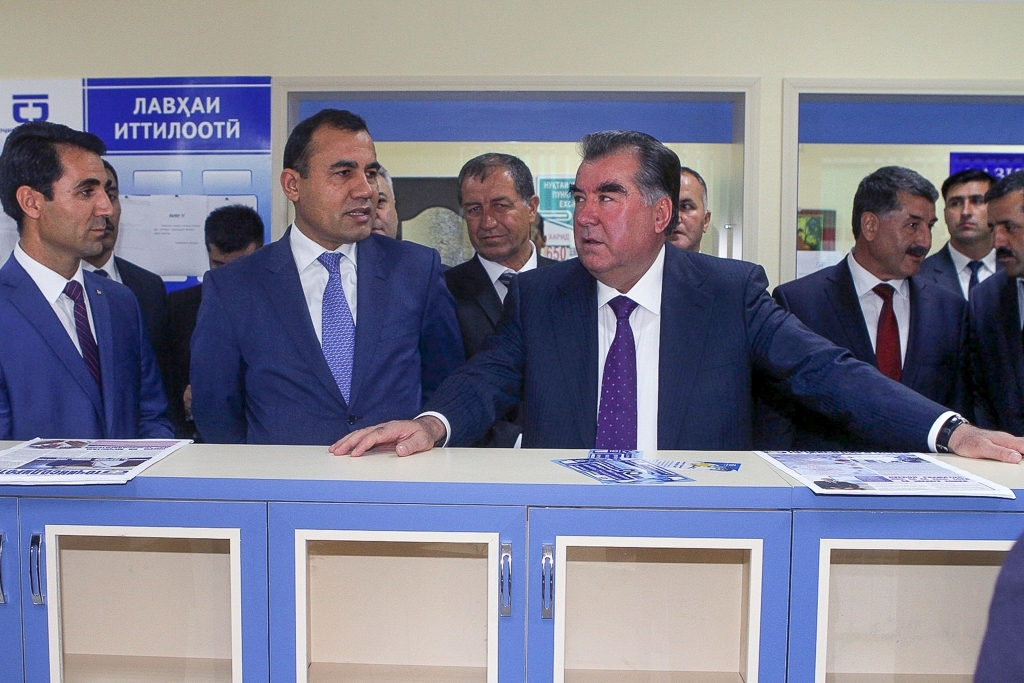 Me no worry: Rahmon hanging out with executives from Tojiksodirotbank. (Photo: Presidential administration)

Four years have passed since two major banks in Tajikistan buckled under the weight of bad loans and still 31,000 accountholders are waiting to get back $116 million, despite government assurances that the money would be paid out.

Speaking to lawmakers on November 22, National Bank Chairman Jamshed Nurmahmadzoda insisted that finances at the two lenders – Tojiksodirotbank and Agroinvestbank – are steadily improving and that their licenses would not be revoked.

Four banks in Tajikistan ran into major trouble in 2016. Two of them, Tojprombank and Fononbank, were liquidated by the government in early 2017, despite having both received bailouts.

More efforts were expended to find foreign investors who might be willing to take over the larger two lenders, although without success. Tojiksodirotbank twice claimed to have attracted white knight suitors, from Saudi Arabia and China, respectively, but a Eurasianet investigation discovered both to be apparently fabricated entities.

Nurmahmadzoda told parliament that Tojiksodirotbank still owes 13,000 accountholders around 445 million somoni ($46 million). That is a marked improvement from late 2017, when the bank’s liabilities before its clients were worth around $102 million.

Meanwhile, 18,000 customers at Agroinvestbank are still unable to get a hold of their savings.

“Out of 1.3 billion somoni ($133 million) [that were originally owed, Agroinvestbank] has returned about half to its depositors,” Nurmahmadzoda said.

As of late 2017, Agroinvestbank still owed just under $80 million.

The fall in liabilities in dollar terms may be attributed to some extent to the fall in value of the somoni. The national currency stands at 9.7 to the dollar now, but was worth 7.9 in late 2016.

Nurmahmadzoda said Tojiksodirotbank still has about 3 billion somoni ($309 million) in assets, implying that it is only a matter of time until the lender is able to raise the funds to make its customers whole.

In December 2016, President Emomali Rahmon assured the general public that the government would do everything possible to ensure savers get their money.

He has avoided mentioning the subject since then.

Watchers of the Tajik banking scene generally agree that the banking crisis of 2016 was occasioned by profligate lending. And then there was the ill-considered spending, often undertaken at the instigation of the authorities.

In May 2013, Agroinvestbank was made to spend $2 million on buying iPads that were then given as gifts by Rahmon to more than 2,000 young people who had participated in a ceremony to mark National Youth Day.

Rahmon was reelected to office later that year with 84 percent of the vote.

Tojiksodirotbank, meanwhile, has had to, again on the president’s orders, pay for the construction of stadiums, schools and other public facilities.