China is subsidizing reconstruction of a road to China. Tajik officials won’t say what they’re offering in return. 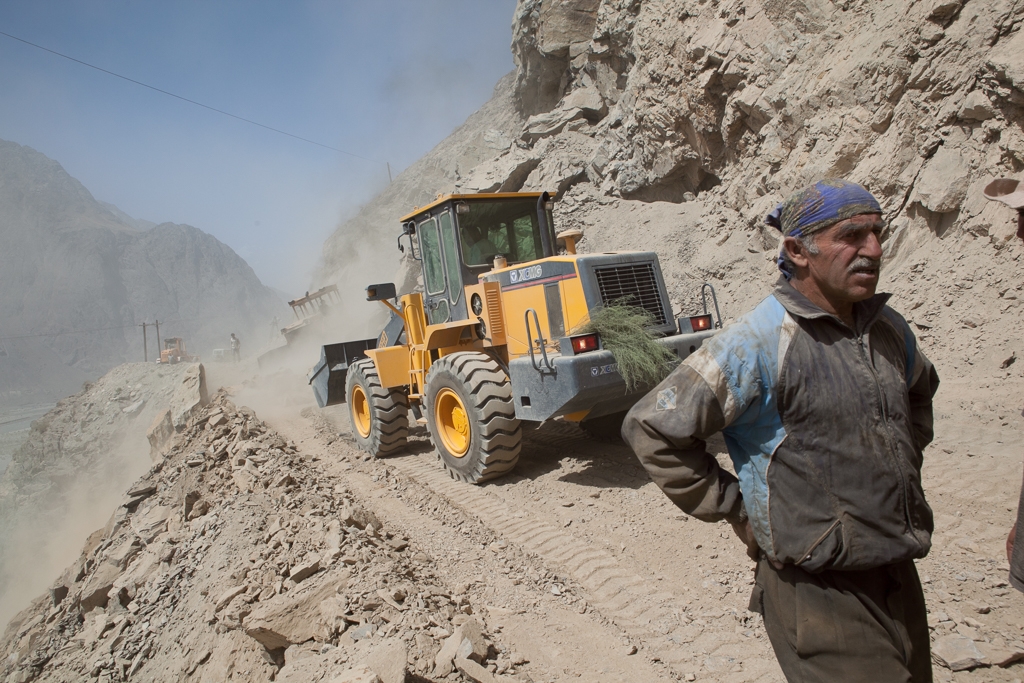 Clearing one of the regular landslides on the Kalai-Khumb to Vanj road. (David Trilling)

Tajikistan has formally accepted a $125 million grant from China to upgrade a key highway. The amount is far less than Dushanbe expected to receive a few months ago.

Little of the money will pass through Tajik coffers. Instead, China will pay Chinese contractors to reconstruct a particularly devilish 80-kilometer section of highway along the Afghan border in the Pamir Mountains. The stretch, from Kalai-Khumb to Vanj, is the only road connecting the Tajik capital with China. It is a dangerous, narrow path clinging to cliffs and prone to landslides.

The road was built during the Soviet period, but has not been renovated since independence.

Tajikistan’s lower house of parliament ratified the grant for 800 million yuan (or $125 million) on October 18. Back in June, Tajikistan’s Transportation Minister Azim Ibrohim said China would provide $204 million toward the project, leaving Tajikistan with a shortfall of about $30 million. The ratification document seen by Eurasianet does not explain how the figure fell from $204 million to $125 million.

The eventual objective is to revamp the entire highway all the way to the Kulma Pass, which lies at a height of more than 4,300 meters above sea level on the border between Tajikistan’s Murghab district and China’s Xinjiang Uyghur Autonomous Province.

A Chinese company will oversee the work, Radio Ozodi has reported; construction material and equipment will be exempted from import duties. So the grant amounts in substance to a subsidy to Chinese companies. And it is eventually Chinese freight companies that will by and large benefit from completion of the trans-Pamiri route.

It is not known how many workers will be brought in for the job or if Tajikistan will offer any other concessions. A Tajik government spokesperson declined to comment. The Chinese Embassy in Dushanbe does not answer questions from independent journalists.

China is Tajikistan’s largest source of finance. According to government figures cited by Asia-Plus, Tajikistan's external debt totaled $3.3 billion, 38 percent of GDP, on July 1, 2021. Of this, $1.2 billion is owed to China.

In recent years, China has stopped issuing the kind of large infrastructure loans that had mired Dushanbe in debt and turned instead to grants. In return, China gets tax breaks and access, often with little public oversight. China is heavily involved in mining in the country.

For example, TBEA, which completed a $349 million coal-fired power plant in the capital in 2016, is, in return, exempt from levies on equipment and technology being imported to develop the Upper Kumarg and Eastern Duoba gold mines.

According to Radio Ozodi, TBEA is entitled to develop the Tajik gold mines until it makes back all the money it spent on the construction of the power plant.

TBEA chairman Zhang Xin was cited in Chinese media saying that if the mines proved not to contain sufficient gold to cover the costs, Tajikistan would grant a development license to yet another deposit.

Before that, parliament voted to exempt another Chinese company, Kashgar Xinyu Dadi Mining Investment, from all types of taxes and customs duties for a period of seven years. The miner was in June granted development rights over a silver deposit in the high-altitude Pamir region.