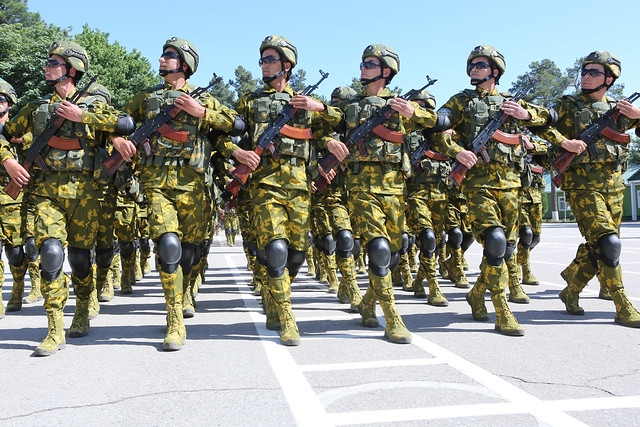 The cavalry is in town: Tajik army soldiers at a military parade on May 28, 2019. (Photo: Tajik presidential administration)

Parliament in Tajikistan has adopted a swathe of legislation setting the terms for martial law and enabling intelligence agents to operate within the country.

Officials said the laws, which were adopted by parliament on May 29, are needed to protect the nation at times of war and against the threat of terrorist sleeper cells. Many of the provisions within the adopted rules have, however, long already been in effect to all intents and purposes.

The legislation on martial law permits the government to limit the free dissemination of information, ban the purchase and sale of arms and to stop people from either entering or leaving the country.

There is an air of redundancy about these changes, however.

All those restrictions are a daily reality of life in Tajikistan, even without the declaration of an emergency. At times of heightened security concern, such as when armed forces have pursued suspected terrorists or sought to suppress the shoots of potential public discontent, de facto limitations have been slapped on freedom of movement and use of the internet. No official has ever thought to seek permission from parliament for such measures.

The same legislation grants the government powers to seize property in the interests of protecting national security and enhances the state’s ability to drum up revenue through taxes and customs tariffs.

The president needs parliament’s approval to impose martial law, but in Tajikistan this is a formality since the legislature is a vacuum of authority wholly beholden to the executive.

Although the emergency powers are in theory designed with an outside incursion in mind, they could also be intended for domestic reasons.

Shokirjon Khakimov, a lawyer and deputy chairman of the wholly sidelined opposition Social Democratic Party of Tajikistan, told RFE/RL’s Tajik service in an interview that the legislation could be used to shore up the government.

“If you pay attention to the experience of Venezuela and Ukraine, the top leadership there has used martial law to try to extend their powers,” he told Radio Ozodi.

If that were not clear enough already, parliament adopted a second strand of legislation permitting spying on their own population, which was on paper not allowed before.

Defense Ministry officials said that this particular change was needed to counter the presence of terrorist cells inside the country.

While this seems consequential, the fact is that Tajik security bodies already spy on their own population, and very intensively at that. For this reason, the significance of the legislation probably needs to be found beyond the text itself.

One possible reading is that this is the Defense Ministry muscling in on territory traditionally occupied by the State Committee for National Security, the successor agency to the KGB. While both are ultimately answerable President Emomali Rahmon, the structures are distinct.

In operational terms, the Tajik military is deeply integrated into alliances dominated by Russia. The ascendancy of the armed forces in acting as ultimate guarantor of public order and as a check on possible sources of domestic unrest appears to greatly strengthen Moscow’s hand in deciding Tajikistan’s political destiny.

The future is very much on people’s mind. There is much speculation that President Rahmon may soon be preparing to step aside so that he can be succeeded by his son, Rustam Emomali, who is now mayor of the capital, Dushanbe. One wholly speculative timeline has this happening within the coming two years. Russia, however, is understood to be unenthused by this prospect.

The option to resort to emergency powers are a conventional feature of governance all around the world. Tajikistan is merely adhering to an international norm by explicitly outlining how those powers can be used when the needs arises. Adopting a code of conduct for martial law in effect puts the international community on notice that the provision is now liable to be invoked. On one level, this is a reminder that security — or regime survival, as critics would have it — remains the foremost priority for President Rahmon and his entourage.

While such details are mere fodder for conjecture, what feels more indisputable is that the newly adopted security legislation is a formalization of an existing state of affairs. It follows that the real reason behind its adoption is not that being offered by the government.