Central Asian leaders are engaged in a balancing act, showing they are content to live with the Taliban’s ascendancy in Afghanistan while signaling they will deal firmly with any trouble that might spill over. 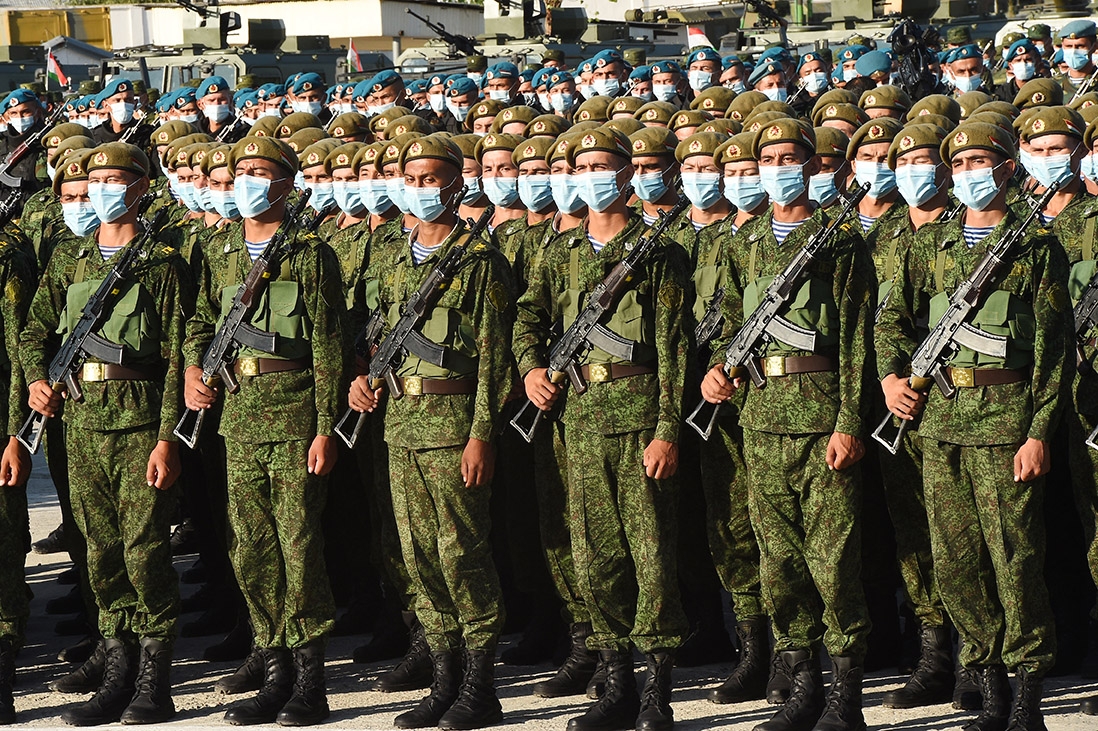 Unrest in Afghanistan has to date had barely any impact on neighbors in Central Asia, but regional leaders and Russia are nonetheless seizing upon ongoing developments as an opportunity to show off military prowess.

On July 22, Tajikistan held its largest military readiness drill in its post-independence history. Around 100,000 servicemen and 130,000 reserve troops were mobilized to take part in an exercise dubbed Border-2021, as President Emomali Rahmon fretted about troubles to the south.

The status of northern Afghan provinces, Rahmon said at a speech announcing the exercises, “remains extremely difficult and uncertain, and the situation is getting more complicated day by day, and even hour by hour.” 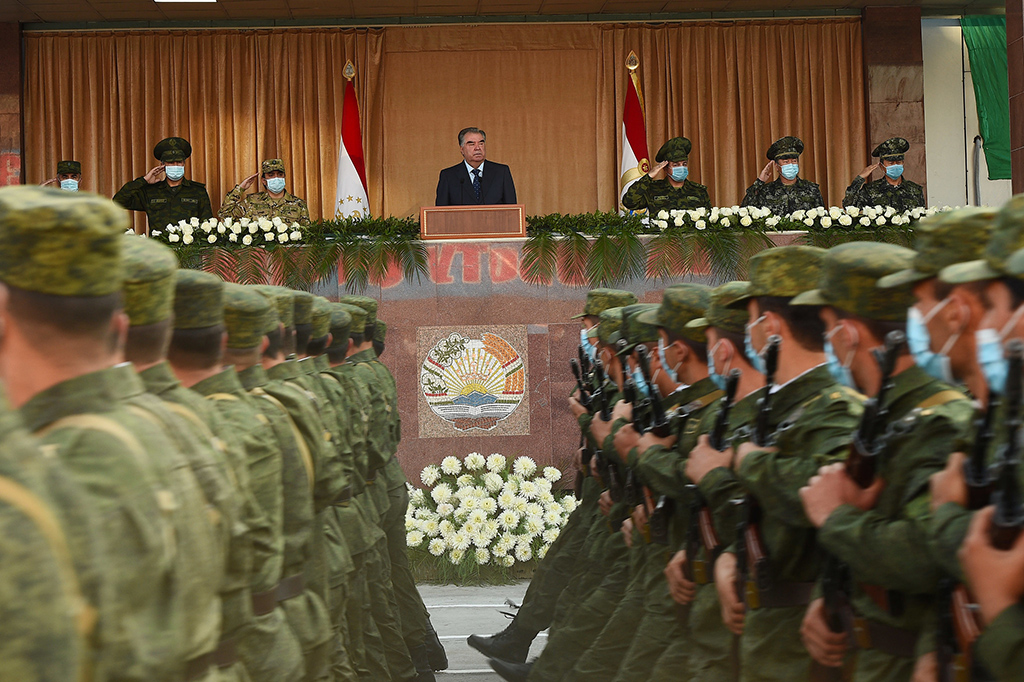 Tajikistan and Afghanistan share a border over 1,300 kilometers long.

More than 1,000 armored vehicles, nearly 3,200 transportation vehicles, 447 items of artillery and mortar equipment, 234 units of air defense equipment and 45 military and transport aircraft and helicopters were deployed in the drill, according to a statement on the presidential website.

At least 20,000 of the troops were dispatched to the regions bordering Afghanistan, the same statement noted. It is not clear where exactly those soldiers have been positioned, though. When Eurasianet embarked on a drive along the extensive Pamir section of the border earlier in the week, there was little sign of any heightened security presence.

Displays of military readiness appear to be part of a balancing act being played by Rahmon and other leaders in the region who are intent on showing they are content to live with the Taliban’s ascendancy in Afghanistan while signaling that they are also able to deal firmly with any trouble that might spill over. 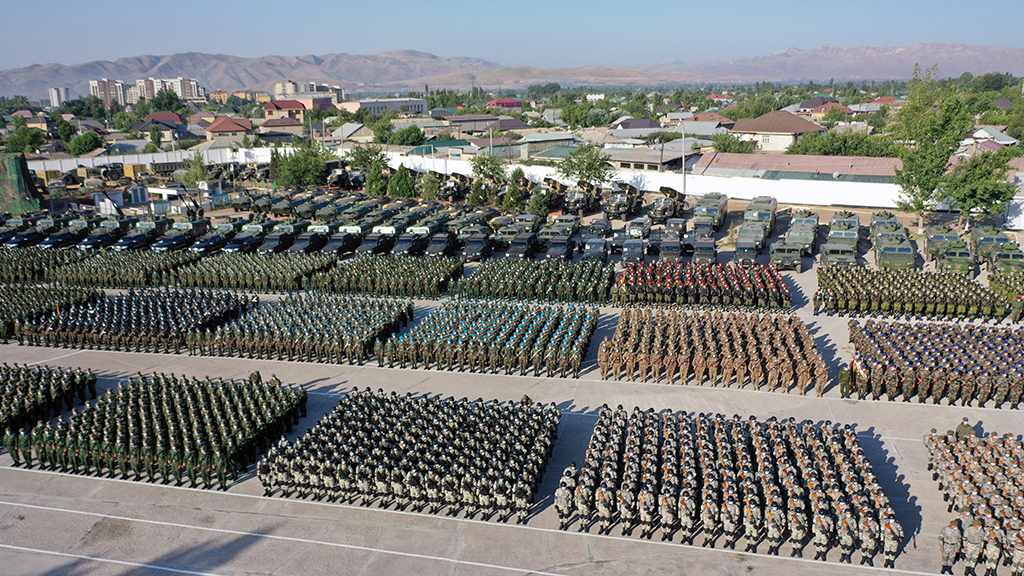 There are other strands of strong anecdotal evidence that Tajik armed forces are stepping up their efforts to bolster defense capabilities. Military recruitment officers have, for example, been touring the country and drawing up lists of young people eligible for callup as wartime reservists.

Rahmon made a point of telegraphing the fact that the July 22 drill did not imply Tajikistan would interfere in its neighbor’s internal affairs.

“We very categorically declare that we will not use our armed forces against neighboring countries. On the contrary, we are always supporters of peace and stability in neighboring countries, so that we can live with them in an atmosphere of calm, stability, friendship, and cooperation,” he said.

“The time has come for politicians, leaders of all political parties and movements, intellectuals, high-ranking officials, and all people in the country to unite and rescue their homeland, their state and their nation from instability and break-up,” he said. 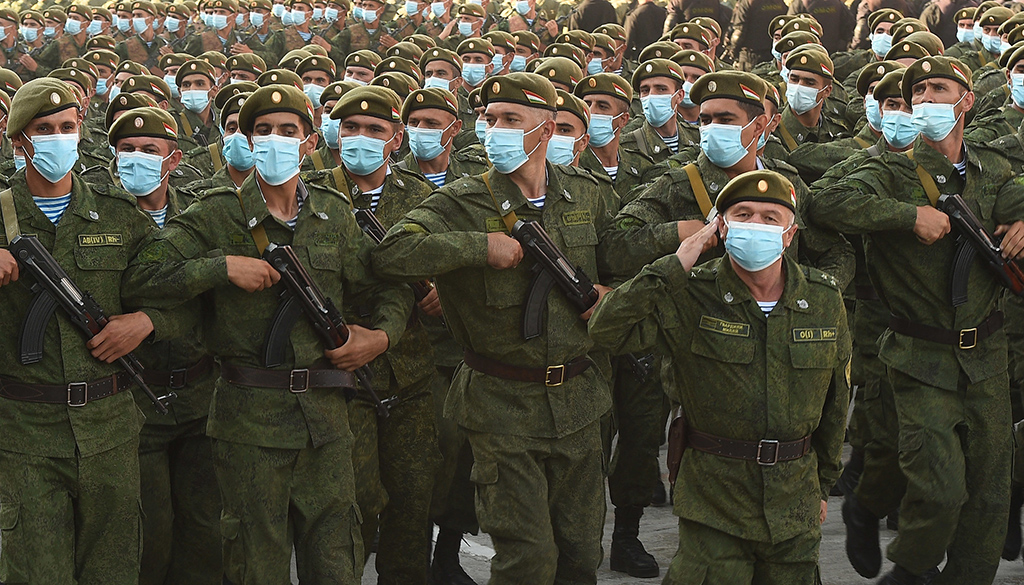 Tajikistan is working in concert with its neighbor and, more significantly, Russia in displaying that it is prepared to deal with any fallout from Afghan turmoil. The three countries are due to hold 10-day, large-scale joint military exercises from August 1 at the Harbmaidon training ground on the Afghan-Tajik border. Around 1,500 Russian and Uzbek troops will take part in the drill. Interfax news agency cited Russia’s Central Military District as saying that its troops will be equipped with more than 200 sets of Ratnik combat gear during the exercise.

The scenario envisioned in the exercise is explicitly a “terrorist incursion from Afghanistan,” although nobody is venturing so far as to identify any group in particular. The Taliban is recognized by law as a terrorist organization in Russia, Tajikistan and Uzbekistan, although their governments have refrained for some time now from referring to the movement in such terms in their official communiqués.

The Taliban for its part has sought to soothe moods by repeatedly assuring Afghanistan’s neighbors that it poses no danger to them. An envoy for the movement told a group of officials from Europe, the United States, and the United Nations in a July 22 conference call that the Taliban would not permit Afghanistan to be used in any way that would threaten the security of other states.

“The Islamic Emirate of Afghanistan will not allow any group or individual to use the country against the security of other countries,” Abdul Salam Hanafi, a member of the Taliban’s Qatar-based negotiating team, was quoted as saying by Interfax news agency.

Russia has been especially busy in its pledges to help solidify Tajikistan’s defenses. The two countries are both members of the Collective Security Treaty Organization, a defense bloc.

Rahmon spoke by telephone with Russian President Vladimir Putin on July 22 to agree on “closely coordinating action” on Afghan-related matters. On the same day, deputy Russian Foreign Minister Andrei Rudenko said that his government would build a border sentry post free of charge on Tajikistan’s border with Afghanistan. Earlier in the week, the Central Military District announced that Russia was reinforcing its 201st base in Tajikistan with 17 infantry vehicles.

Moscow is at pains, though, to dispel impressions that it is pursuing a stealth agenda to revert to the situation before the mid-2000s, when Russian forces were in effect in charge of securing the border with Afghanistan. That arrangement, a legacy of the Soviet era and then the civil war that ravaged Tajikistan in the 1990s, was suspended in 2005 by mutual consent. It is commonly speculated that the Kremlin is eager to regain a stake in controlling that border.

Zamir Kabulov, Russia’s special envoy to Afghanistan, said on July 22 that the 201st military base would never act independently of the Tajik authorities.

“As long as there is no enemy, it will not do anything other than work on optimizing combat and political training,” Kabulov said in an interview on Ekho Moskvy radio station.