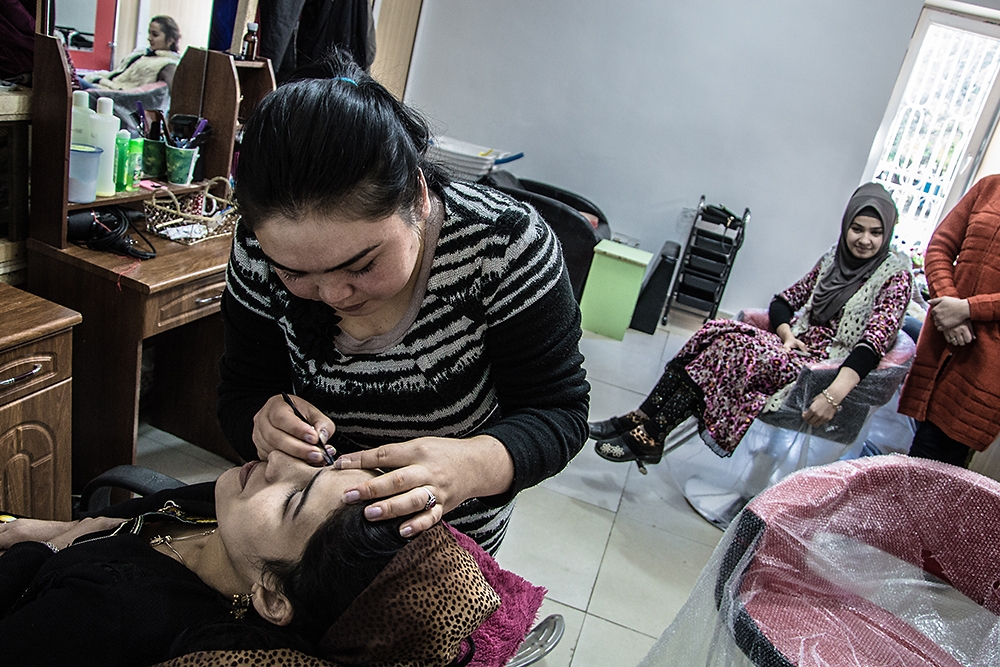 Nelofar Moradat, who studied computer science in Kabul, was forced to flee Afghanistan and now works in a beauty parlor in Vakhdat after she received vocational training provided by UNHCR. Her income is barely enough to support her family. (Photo: Jeremie Berlioux)

The surge of refugee crises across the globe is dampening prospects for Afghans stranded in Tajikistan of finding new safe havens any time soon.

Roughly 2,200 refugees from Afghanistan live in Tajikistan, and as conditions worsen in their home country, few contemplate returning. At the same time, those hoping to be resettled in a third country by the United Nations are growing used to disappointment.

With the latest tally for refugees worldwide at around 20 million, countries admitting newcomers have begun to apply highly selective criteria. “Resettlement isn't a solution that is prioritized for Afghan refugees in Tajikistan. So we do whatever we can to improve local integration where people can live with dignity,” said Kevin Allen, a representative for the UN High Commissioner for Refugees in Tajikistan.

Cultural and linguistic similarities help Afghans assimilate to some extent, but some barriers are harder to surmount.

Vasidin Gardi’s story is representative of the travails that many Afghan refugees go through. He worked as an interpreter for the US Army before leaving Afghanistan. “Some people were following me, I got questioned and beaten up, so I fled with my family,” he said while explaining his decision to flee his native country.

Once in Tajikistan, Gardi hooked up with acquaintances in Vakhdat — a Tajik town of 45,000 people about 10 kilometers east of the capital, Dushanbe. Most Afghan migrants have settled in Vakhdat. Gardi quickly got a job in a garment shop owned by some friends.

The shop — a dusty, dark room in the basement of the bridge linking the two parts of the bazaar — is a frequent target for corrupt officials, as are many other Afghan businesses. “They know where Afghans work and that we can’t do anything but pay,” Gardi said. “Although we have all the documents, they always ask for a bribe.”

Success is a temptation to corrupt officials.

“As soon as you have set up your shop and you are making a good income, the authorities start to make trouble for you,” said Muhammad Ayam, who owned a grocery shop in Afghanistan. “They will take your business away or increase taxes and make money off you.”

Ayam’s sons opened their own shop in Vakhdat four years ago. They had to pay around $40 every month in kickbacks, he said. The family used to earn just enough to pay the $100 rent for their flat. They depend on remittances from a daughter living in Canada.

Ayam said he complained once about police harassment, but that he was given short shrift.

Afghans cannot seek asylum at the border with Tajikistan. Instead, they must secure a visa and travel to Tajikistan before they can apply for asylum. That has greatly limited the number of refugees coming to Tajikistan since authorities in Dushanbe automatically refuse papers to applicants deemed even slightly suspicious.

For all these difficulties, Tajikistan is something of an outlier in the region. It remains one of the few countries in Central Asia that allows refugees to work, and which gives them access to social security benefits.

Given that the option of relocation remains closed, the emphasis for the UNHCR and nongovernmental organizations like the Danish Refugee Council (DRC) and Refugee, Children, Vulnerable Citizens (RCVC) is on offering vocational training.

When she was compelled to flee Kabul, 24-year old Nelofar Moradat was studying computer science. After getting to Tajikistan, she tried to continue her studies and learn Tajik and Russian. “The principal of the school told me that I was too old and that I should get married,” she said.

Spurning that advice, she signed up for training sessions with RCVC and built on her previous experience working in a beauty parlor in Afghanistan. She has now opened her own parlor. “It doesn’t cover the rent for my family’s apartment, but it helps,” she said.

Farid Ahmad, a 29-year-old former bank clerk, is a testament to the need for adaptability. When fluent English-speaker Ahmad arrived in Vakhdat two years ago, he could not find any work matching his training, so he worked as a porter in the market. He then learned to repair shoes while on the job.

“It’s hard to say that we have enough income because work isn't at the same level all the time and the expenses related to the house are increasing,” he said.

Housing is a sore point for Afghans in Tajikistan. “The normal price for a two-room apartment is $50, yet we pay around $100, sometimes more,” said Gardi.

The practice of marking up rates for Afghans is causing rents to rise across the board for everybody in Vakhdat.

“Local communities consider the Afghans responsible for this inflation, even though we are the first victims of it,” said Nalofar Ahmadi, a 26-year old Afghan working for an Iranian company.

A government decree adopted in 2000 bars refugees from living in the capital, Dushanbe, confining them to the surrounding towns of Vakhdat, Hissor and Rudaki. Local activist organizations have, with the assistance of the UNHCR, embarked on legal battles to overturn the decree, but to no avail.

There are conflicting explanations for why the decree was introduced in the first place. Some have suggested it was motivated by housing shortages in the capital, which has a population of around 750,000. Others believe the decision was taken for national security reasons. Authorities have grown acutely anxious about the potential for unrest spreading from Afghanistan.

Afghans working in Dushanbe have to commute every day and be sure of being outside Dushanbe by 8 pm. “After that time, we have to go back to our cage,” Ahmadi said bitterly.

Jeremie Berlioux is a French journalist currently based in Kyrgyzstan.