TBEA is getting the perks in return for building a power plant. 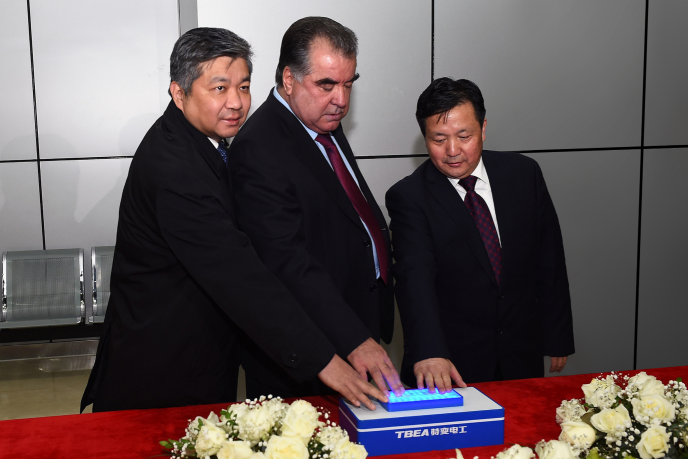 You press my buttons: Tajik President Emomali Rahmon, center, alongside TBEA chairman Zhang Xin, right, and China's ambassador to Tajikistan, Yue Bin, at the 2016 launch of the second stage of the TETs-2 power plant. (Photo: TBEA)

A Chinese-owned engineering and mining company has been granted generous tax exemptions by Tajikistan’s government, becoming the second such Chinese investor to receive those terms over recent months.

RFE/RL’s Tajik service, Radio Ozodi, reported on October 22 that TBEA will not have to pay levies on equipment and technology being imported to develop the Upper Kumarg and Eastern Duoba gold mines.

The concessions to develop those mines were also giveaways from the Tajik government, granted in return for the clearance of debts owed to TBEA. The Xinjiang-based company used mainly its own funds to build the 400-megawatt TETs-2 power plant in Dushanbe. Work on that thermal power plant was completed in December 2016 at a total cost of $349 million. Of that overall budget, around $17.4 million were provided by the Tajik government.

According to Radio Ozodi’s reporting, TBEA is entitled to develop the Tajik gold mines until it makes back all the money it spent on the construction of the TETs-2 plant.

China-based news website Securities Times cited TBEA chairman Zhang Xin as saying that if the mines proved not to contain sufficient gold to cover costs, Tajikistan would grant a development license to yet another deposit.

According to TBEA’s preliminary estimates, the deposits contain proven gold reserves of around 51.7 tons, but possibly up to around 117 tons in total.

A document obtained by Radio Ozodi lists 615 types of technical equipment that TBEA will be able to import without paying sales taxes and customs duties. It is unclear how much the government stands to forfeit.

Including Upper Kumarg and Eastern Duoba, there are nine precious metals deposits currently being developed by Chinese companies.

Last week, parliament voted to exempt another Chinese company, Kashgar Xinyu Dadi Mining Investment, from all types of taxes and customs duties for a period of seven years. The miner was in June granted development rights over a silver deposit in the high-altitude Pamir region.