The president has given no indication he has a plan, other than to instruct the public to stockpile two years’ worth of food. 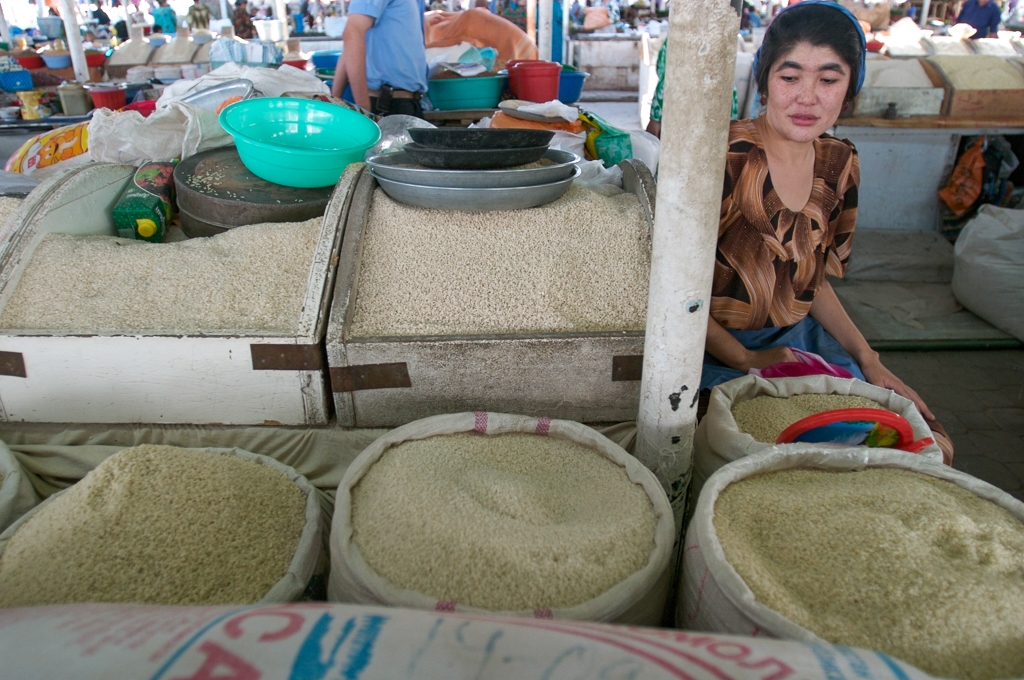 Since the Ukraine war began, food prices in Tajikistan have increased by between 7 and 15 percent. (David Trilling/Eurasianet file photo)

Tajikistan says it has a plan to get out of the looming economic crisis provoked by the war in Ukraine. The only problem is that barely anybody knows what’s in it.

The pain that is coming will be the result of the certain drop in the volume of remittances from Russia, where many hundreds of thousands of Tajik seasonal migrants live and work.

A nervous population can do nothing but keep a close eye on the erratic developments of Russia’s imperiled economy.

“This has become the rule in Tajikistan: When the Russian ruble depreciates, prices for food go up on the very same day,” said 41-year-old Dushanbe resident Guljahon, who spoke to Eurasianet on condition of anonymity.

This fresh crisis threatens to push yet more Tajiks beyond the threshold between scant comfort and total penury.

In 2020, Guljahon’s husband, who has had jobs as a laborer on building sites, was unable to go to Russia because of the COVID-19 pandemic. To keep the food coming for them and their three children, the family sold items of furniture and home appliances.

Flights between Russia and Tajikistan only resumed in earnest in the fall of 2021. The construction season in Russia typically picks up in spring, when the weather improves, so Guljahon’s husband headed out in March. That was when a turbulence sparked in Russia by the international sanctions regime began to take its toll.

“We thought we could start spreading our wings, but then the crisis began again,” Guljahon said.

Sustained interventions by the Russian Central Bank have helped the ruble regain its losses since the start of the Ukraine war, which is good news for Tajik workers, since that has restored some health to the state of their incomes.

But the artificially maintained level of the ruble will do little to preserve the health of the labor market. Some early signs are worrying.

The Labor, Migration and Employment Ministry on April 8 revealed that 60,000 Tajik nationals had returned to their home country from Russia in the first three months of this year. It is normal for people to return home throughout the year since labor is highly seasonal, but that figure is 2.6 times higher than what was seen in the same period in 2021. The caveat is that the COVID-19 interlude has severely disrupted the normal ebb and flow of movements, making these data more ambivalent and complicated to interpret.

Nevertheless, regardless of whether more or less Tajik migrants go to Russia, jobs will be fewer and salaries will be lower.

Russian business newspaper RBK last month cited VEB.RF, a state-run national economic development institution, as forecasting a 12 percent fall in disposable incomes for Russians in 2022. For the country’s weakest earners – its migrants – things could be much worse.

And if remittances start dwindling drastically, spending power in Tajikistan will tumble. Staples like meat, rice and carrots may become even rarer sights on the tables of the poor before long.

Prices have already gone up. Since the Ukraine war began, prices for food goods have increased by between 7 and 15 percent.

The government has for now in the main stuck to burying its head in the sand. Officials have barely acknowledged that there is a problem at all. This is in large part a feature of the deeply authoritarian and personalistic political system. Acknowledging a crisis could be read as tantamount to criticizing the wisdom of government policy – and that leadership of President Emomali Rahmon more specifically.

That said, Rahmon has conceded that not all is well. In a speech marking the start to the holy month of Ramadan, he alluded to a looming period of unpredictability.

“This year will be the most difficult and complicated for humanity in every respect, particularly when it comes to food security,” he said on April 1.

He did not address anything his government intends to do to mitigate this hardship, however. He instead instructed the public to stockpile two years’ worth of food.

“We must not forget the hardships and suffering that our people endured during the years of the civil war [in the 1990s] because of the lack of bread. And so, I want to emphasize once again that every family should think about how to provide for themselves, how to produce as many goods as possible and stock up on the food they need for the coming two years,” the president said.

Rahmon did trail some band-aids, though. One was a moratorium on government inspections on businesses until the end of 2022.

Spot audits are typically a favored way of keeping the cogs of corruption whirring. Enterprises operate at the mercy of a whole range of state inspectors, ranging from tax officials to health and safety standards monitors, who it is said will accept a bribe to turn a blind eye to irregularities.

The Economic Development and Trade Ministry, meanwhile, does have an anti-crisis plan. At least it says that it does.

When Dushanbe-based outlet Asia-Plus contacted the ministry for details, it was told that the plan envisioned measures to contain inflation, support for vulnerable segments of the population, labor migrants and entrepreneurs, and commitments to keep salaries and pensions rolling in for state employees and retirees.

What the ministry did not provide was any specifics about how it intends to achieve any of those aims.

Sadriddin Shamsiddinov, a Dushanbe-based economics affairs expert who would only speak to Eurasianet if he was identified by a pseudonym, said this plan was little more than a reprisal of the many other similar nominal anti-crisis plans that the Tajik government has announced in previous years. Their intent, he said, was merely to give the misleading impression that officials were doing something.

“Over the past 10 years, this is at least the third plan we’re hearing about. But in reality, these plans don’t do anything,” he said.

Plans should have specific points to implement, deadlines, and responsible personnel who can be held to account, but none of that is present here, Shamsiddinov said.

“As a rule, responsibility for implementation of the plan is impersonal. Or there might be a specific person [in charge], but we do not know who it is, and if the plan fails, no one will be held to account for it. We do not have a single report summing up what work was done on implementing previous plans,” Shamsiddinov said.

Abdumanon Sheraliyev, a Tajik economic affairs commentator based in Europe, argues that the Tajik people will, as is now customary, have to fall back on their own resources and expect nothing from the government.

“Even if [the government] somehow reacted, they could hardly do anything to prevent this crisis, which may become the worst to hit since the days of independence,” Sheraliyev said. “It takes years to prepare for such crises, by implementing really serious state programs, but our authorities have never had one of those.”