Tajikistan: Authorities double down on jihadist link to prison riot 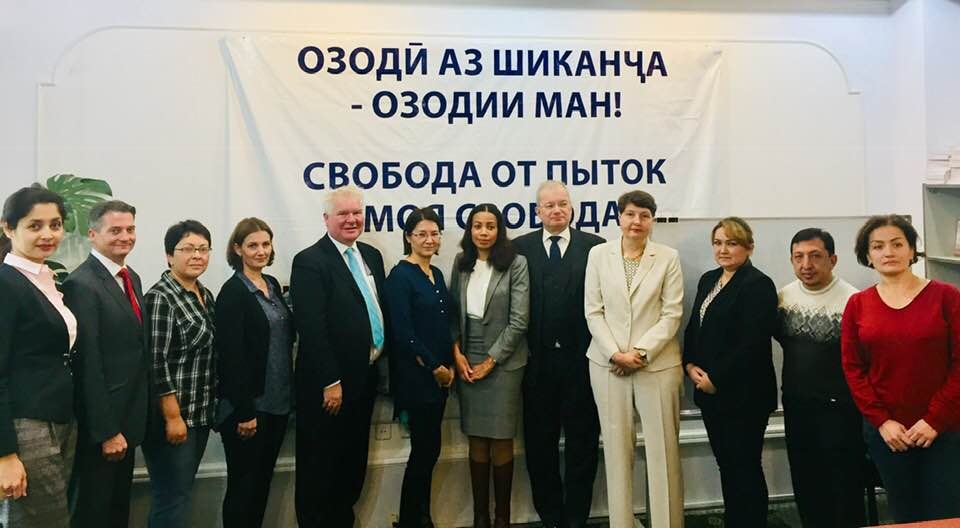 The ambassadors of the United States and the United Kingdom, second and fifth from left, respectively, posing alongside other diplomats and NGO representatives calling for more clarity over the deadly Khujand prison riot. (Photo: Kevin Covert Facebook page)

Officials in Tajikistan have divulged only the scantiest of details about what happened during a deadly prison riot last month, but the intent appears to be to write off the incident as a burst of jihadist-led violence.

On December 21, Asia-Plus news agency cited an unnamed official with the prosecutor’s office in the northern Sughd region as saying that inmates at the Khujand prison performed Islamic funeral prayers before rising up against guards. The implication of the purported revelations was that those behind the disturbances knew they were mounting a suicide mission.

“They knew perfectly well that they were going to die,” the source told Asia-Plus.

The same source claimed that officials believe a repeat event may yet occur.

In the absence of an independent and transparent investigation, these claims carry little weight. Authorities may hope, however, that dark forebodings of a resurgence of unrest in a facility said to hold mainly people sentenced on religious extremism charges will silence those calling for greater clarity.

Demands for further investigation have been led by a handful of foreign missions in Dushanbe. U.S. Embassy Chargé d’Affaires Kevin Covert wrote on his Facebook account on November 19 that it was “important for the government to conduct a thorough investigation, follow the rule of law, and protect the human rights of prisoners and their families.”

Initially the government opted for a total stonewall strategy over what took place in the prison colony on the night of November 7. In the absence of official tallies, large death counts were reported. RFE/RL’s Tajik service, Radio Ozodi, cited unnamed sources as stating that around 50 people, including two guards, were killed.

Foreign Minister Sirojiddin Muhriddin broke radio silence on November 22, when he admitted that a riot had taken place, although he said that only 21 prisoners had been killed, and that this was done as a result of efforts to quell the unrest.

The government has firmly resisted revealing anything more. When Forum 18, a website that reports on the lack of religious freedoms in the former Soviet Union, contacted prison service officials about why many killed inmates were deprived of the right to be buried according to Muslim rights, they were spurned at every turn.

The determination to deter further scrutiny by insisting on the jihad angle may also serve to justified continued mistreatment of prisoners at Khujand’s Labour Camp 3/3.

Ozodi on December 20 reported that more than 20 prisoners suspected of involvement in the riot are being held in punitive cells or solitary confinement. Ozodi reported, citing an unidentified source whose affiliation is also undisclosed, that the prisoners may end up spending between three and six months in solitary, considerably more than the three days normally envisioned for bad behavior.

Ozodi’s source describes those being held in solitary confinement as former members of the Islamic State group. Such claims are impossible to verify.

An unnamed “expert” speaking to Asia-Plus speculates that among other potential causes for the violence may have been the unjust and cruel treatment meted out to inmates by the prison staff. Also, although the prison has been described as a facility for holding suspected Islamic extremists, the nature of Tajikistan’s justice system is such that almost none of those people are likely to have benefitted from a fair trial. Allegations about their affiliations should, accordingly, be viewed with circumspection.

That notwithstanding, Tajik authorities may hope that ominous warnings about looming Islamist violence will be sufficient to get meddling Western governments off their back.