Tajikistan: Authorities go back on their word in deal with GBAO residents

State TV has smeared the victim of a police shooting as a hotheaded vigilante. 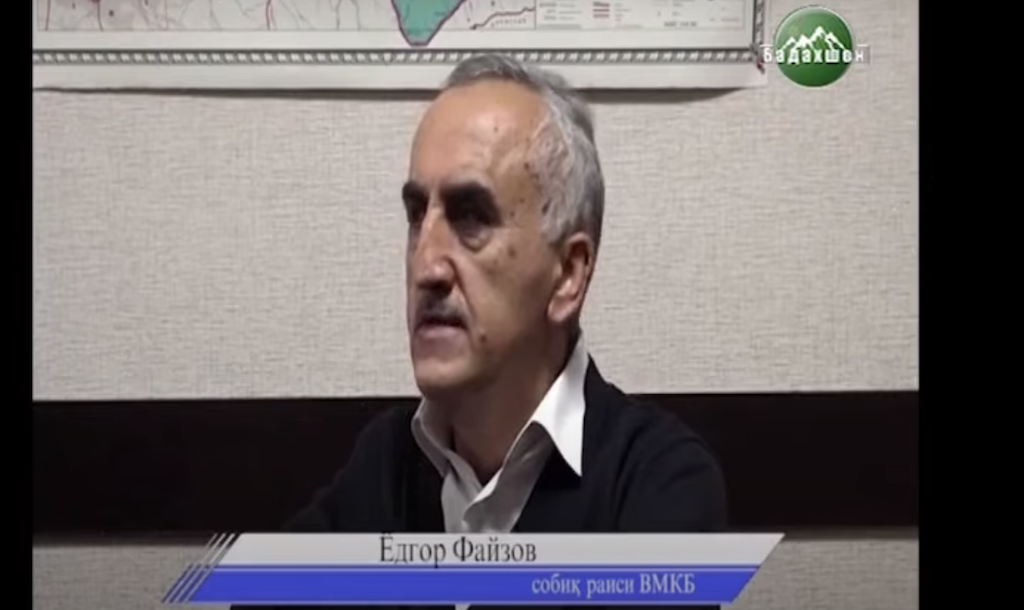 Screenshot of Faizov during his interview with state television.

After subjecting the population of the Pamirs to a punitive weeks-long internet blackout, authorities in Tajikistan have produced their own account of recent unrest in the region to cast pro-autonomy demonstrators in a negative light.

The aggressive two-pronged, censorship and propaganda approach adopted by the government is highlighting the deep anxieties felt by Dushanbe over any narratives diverging from those produced by the state.

As well as depriving residents of the Gorno-Badakhshan Autonomous Region, or GBAO, of the ability to spread the word about last month’s protests, the internet blackout is severely hampering young people hoping to secure places in universities abroad during application season.

The four days of rallies in late November, which brought thousands onto the street in Khorog, the GBAO’s capital, were sparked by the killing of a local resident by law enforcement officers. At least two people were killed after an initial attempt by government forces to suppress the demonstration. While the protests initially centered on demands for accountability for the killing of Gulbiddin Ziyobekov, they later expanded to include calls for greater self-rule.

The standoff ended with pledges from the government to institute an independent investigation into the circumstances around Ziyobekov’s death.

Authorities already appear to have poisoned the well, however, with a report aired on state television on December 9 that depicted Ziyobekov as a hotheaded vigilante acting on behalf of a fraudster.

This story has its roots in an incident that took place in February 2020, when a group of people from GBAO’s Roshtkala district, which included Ziyobekov, confronted and allegedly assaulted a deputy prosecutor they said had harassed a young woman, forcing him to issue an apology to camera. Ziyobekov was subsequently named as the object of a criminal investigation. His arrest was avoided following negotiations mediated by the then-governor of the GBAO, Yodgor Faizov, who was removed from his post last month.

The most sensational aspects of the state TV’s account hinge on an interview with Faizov. It is unclear whether he was recounting the story under duress.

Faizov says in his interview that the girl who first made the harassment claims had been attempting to bribe a police officer into helping her secure a new passport under an assumed name. Her motivation was said to be that she had been deported from Russia and was consequently unable to re-enter that country under her real name. She was offering 300 somoni ($27) and a goat in payment for the favor, the former governor states.

The conclusion of the report is that the deputy prosecutor who came under attack had only been seeking to investigate a case of alleged attempt at forging documents.

Because of the internet blackout, GBAO residents have been unable to put across their own side of events, even though restoring telecommunications services had been one of the conditions for bringing an end to November’s rallies.

Another side effect of the blackout is that young people from the GBAO that had planned to sit online entry exams for foreign universities have been unable to do so.

“I am applying to Moscow universities through Rossotrudnichestvo [Russia’s state-run cultural and humanitarian cooperation agency]. The entrance exams have now begun, but there is no internet, so I cannot take the tests,” a Khorog resident who asked to be identified only as Khamza told Eurasianet.

University applicants going through Rossotrudnichestvo are liable to be exempted partially or completely from tuition fees, so missing out on that chance constitutes a potentially major blow for aspiring students.

Khamza said he was forced to travel to the capital, Dushanbe, which is a full day’s drive away, to take the Rossotrudnichestvo exam.

Those unable to make the same trip appealed in a public letter to the Russian authorities to take account of the technical difficulties that they were facing.

“Young people who had expressed a desire to enroll in Russian universities through Rossotrudnichestvo have become hostages of the situation and have missed the opportunity to submit documents remotely,” the open letter states.

A law enforcement source with inside knowledge of the situation told Eurasianet that the motivation for keeping internet connections offline was that GBAO residents were refusing to refrain from writing social media posts about the ongoing situation in the region and were trying to upload images of last month’s rallies.

While Pamiris await the return of the internet, prosecutors and investigators have initiated a formal investigation into disturbances. A team of at least 20 investigators has been sent to the region to handle the matter.