Officials say there were more than 30 fatalities. 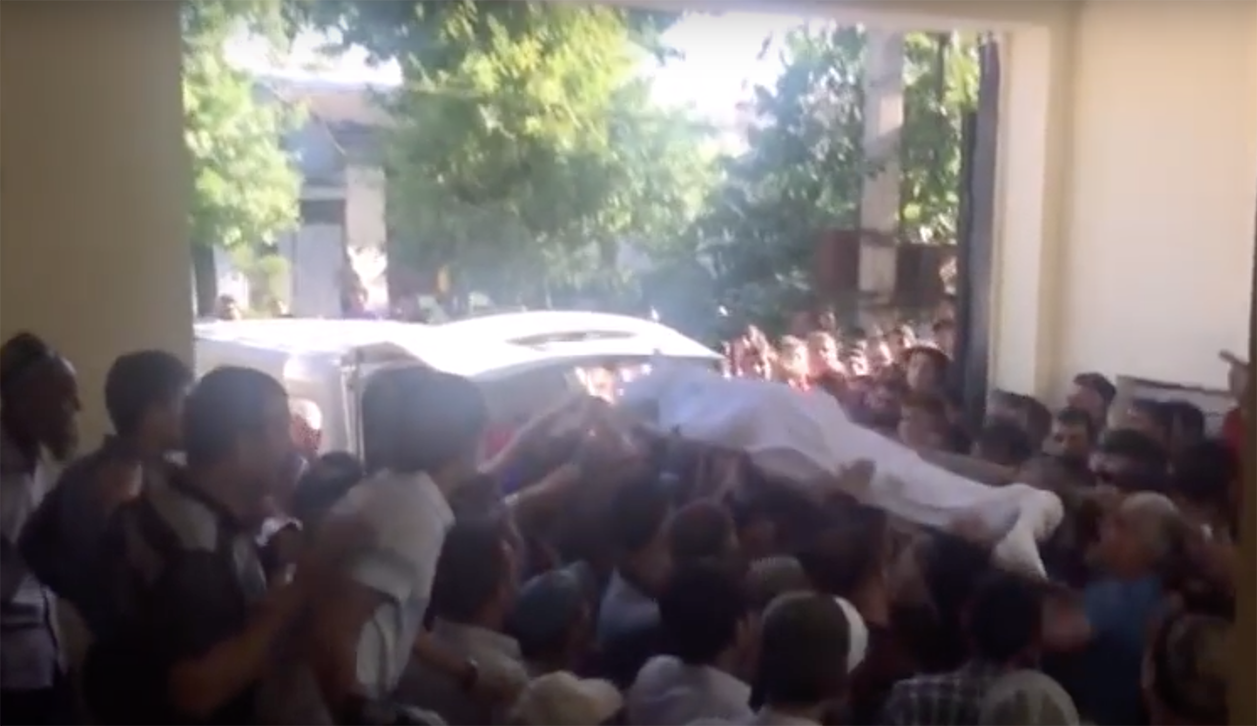 The body of Abduusattor Karimov being brought to his home, as seen in footage provided to Prague-based news website Akhbor. (Photo: Akhbor)

A riot broke out at a high-security penitentiary outside Tajikistan’s capital over the weekend, claiming more than 30 fatalities among guards and prisoners.

Authorities said on May 20 that they believe the Islamic State group was responsible for stoking the unrest. Tajik officials routinely pin similar unrest on militant or opposition groups, but it is not possible to verify such claims.

Almost all that is known about what happened at Kirpichniy prison, which is located in the Vahdat district, around 15 kilometers east of the capital Dushanbe, is based on official accounts. The Justice Ministry said in a statement that a fight broke out among imprisoned members of Islamic State and the banned opposition party Islamic Renaissance Party of Tajikistan, or IRPT, at around 9:30 p.m. on May 19. They say 29 prisoners and three prison guards died in the bloodshed.

This marks the second bloody outbreak of violence at a prison in Tajikistan in the past half year. According to some early reports, around 50 people, almost all prisoners, were reportedly killed at a penitentiary in the northern city of Khujand in November. The official death tally was 21 prisoners and two prison guards. The government similarly pinned that unrest on the Islamic State. There has been no independent investigation into those events.

Officials said in their unusually detailed summary of events at Kirpichniy that they believe that Behruz Gulmorod, the son of high-ranking Islamic State commander Gulmorod Khalimov, who is last known to have been engaged in combat in Syria, was responsible for instigating the violence.

The ministry also named a person called Fakhriddin Gulov, who was convicted to 26 years in prison in 2018 for alleged involvement in preparing terror attacks in Dushanbe, as a potential ringleader. Gulov was also accused of belonging to the IRPT.

Other named suspects were Mahmadullo Sharipov and Ruhullo Khasanov, but no details were provided.

The Justice Ministry said in its statement that the Islamic State convicts initially killed three prison employees. They then allegedly turned their attention to their antagonists among the rest of the prison population.

“In order to intimidate the other prisoners, the Islamic State members executed five people and ten others were savagely beaten,” the statement said.

It is not explained how the others were killed.

Among those said to have been executed by other prisoners was Said Kiemitdin Gozi, a founding IRPT member who was abducted in St. Petersburg, Russia, in 2017 and then spirited to Tajikistan by security services.

President Emomali Rahmon alluded to Gozi in a speech last May during which he took a swipe at both the IRPT and Iran, with which Dushanbe has been engaged in a long-running spat.

“His pockets were filled with dollars from that country, which called itself our so-called friend,” Rahmon reportedly said. “He himself admitted that he accepted the Shiite faith and carried out the orders of the security services of that country against the Tajik nation.”

Gozi was later sentenced to 25 years in prison by the Supreme Court. That penalty was subsequently reduced to eight years.

The Justice Ministry also confirmed that another fatality was Abduusattor Karimov, a member of the IRPT’s supreme political council. In 2016, months after the party was banned, Karimov was sentenced to 26 years in prison for alleged involvement in a coup attempt. Payom, the IRPT’s website, had reported since that Karimov had been seized by heart failure and needed urgent hospitalization but that relatives were barred from visiting him.

Yet another person killed Saidmahdihon Sattorov, a mullah and self-styled “prophet of the end of the world” who was sentenced to 16 years in jail on an array of counts, including extortion, polygamy and defiling corpses.

As of the publication of this piece, the Islamic State is not known to have claimed any link to the violence at the prison.

It is near impossible to know at this stage how much credence to give the official story about what has happened at Kirpichniy. Some curious details are jarring, however. What is most remarkable is the speed with which the government has provided an involved account complete with names, although many finer points of the chronology and a viable explanation for the unrest are absent. When the violence broke out in Khujand last year, it took several days for the authorities to acknowledge anything had happened, let alone to divulge specific details.

It is also impossible to verify claims about the presence of numerous alleged Islamic State militants in the country’s prisons.

The government’s classification of whom it deems to be an full-fledged Islamic State militant has been confused by its numerous but largely risible attempts to elide that group with the IRPT, which has long insisted it repudiates radical action and has no truck with extremist Muslims. When four foreign cyclists were murdered in a car-ramming in southern Tajikistan in July 2018, the first instinct of the government was to link the attack on the IRPT. The killings were later claimed by Islamic State. Officials have never retracted their initial accusations, in effect implying that they believe the groups to be linked or allied, whilst also claiming the IRPT is supported and funded by the Shiite government in Iran.

Some insight into what is happening in Tajikistan’s prisons was offered recently, however, by Jaloliddin Mahmudov, a IRPT political council member who was released from prison and then gave an interview to RFE/RL’s Tajik service on April 10. He distinguished between regular convicts serving sentences for common crimes, like robbery and fraud, and members of Salafist groups and organizations such as Jamaat Ansarullah and Hizb ut-Tahrir. The latter groupings, he said, were regularly engaged in violent squabbles.

Since it is unlikely that any independent investigation will ever be allowed into events at Kirpichniy, the wider public may never learn whether this was an especially grisly confrontation or something altogether more sinister.