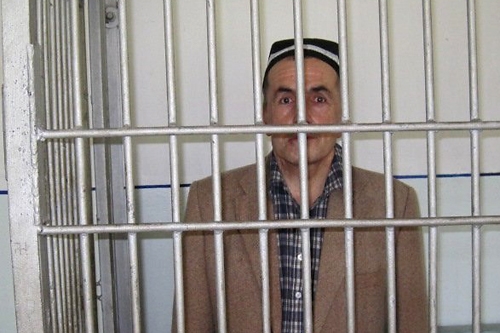 An important press-freedom case is reaching its conclusion in Tajikistan. Independent journalist Makhmadyusuf Ismoilov has been likened by colleagues to Robin Hood for his efforts to expose governmental corruption. Far from seeing him as a heroic figure, officials contend Ismoilov is a calumniator and want him locked up.

Prosecutors have asked a court in northern Sughd Province to give Ismoilov, a reporter for the independent Nuri Zindagi weekly, a 16-year sentence for insulting officials, defamation, and inciting ethnic tensions. The charges stem from a series of articles he wrote on high-level corruption in the province. Sentencing was scheduled for October 3, but the hearing was unexpectedly postponed. A journalist in Sughd said officials appear concerned by the attention the case has received in recent days.

Ismoilov, 51, has been in custody since November 2010. Watchdogs say his trial is designed to silence a government critic. His articles “were well within the bounds of responsible free expression,” Paris-based Reporters Without Borders (RSF) said in a September 30 statement.

“Everything about this prosecution smacks of political revenge rather than normal judicial proceedings,” a RSF statement continued. “The sentence requested is out of all proportion to the charges against Ismoilov. … Although this journalist has been in provisional detention for more than 10 months, the investigators have still been unable to produce any convincing evidence for the charges against him.”

The New York-based Committee to Protect Journalists (CPJ), meanwhile, called the charges against Ismoilov preposterous. "The Tajik authorities are using the threat of prison to intimidate journalists and shield officials from public scrutiny," CPJ said in a statement.

Media rights watchdogs have used the criminal case of a BBC journalist to help draw outside attention to Ismoilov’s case. Urinboy Usmonov of the BBC’s Uzbek-language service was arrested this summer and held for a month in Tajikistan for allegedly belonging to a banned Islamic radical group, Hizb-ut-Tahrir.

CPJ asserted the charge was “trumped-up,” and his arrest prompted a diplomatic outcry. In response, officials reduced the charges, and the journalist was released on bail. He still faces five years for reportedly having contact with Hizb-ut-Tahrir members. Security officials say Usmonov should have volunteered information he learned during his reporting. His lawyers say journalists are legally protected from revealing their sources.

Defamation and other criminal charges that effectively silence critical media are common in Tajikistan. In addition to facing the possibility of prison, journalists often have to contend with financially ruinous lawsuits and/or physical violence.

In September, Khurshed Atovullo, chief editor of the Farazh weekly, told EurasiaNet.org that a local official was demanding 500,000 somoni ($103,000) for “defamation” after he published an article criticizing the official’s Mercedes. In 2010, his paper was not allowed to use its regular print house in Dushanbe for several weeks after critically reporting on the government’s operations to rout suspected Islamist militants in the Rasht Valley. And on August 31, unidentified men assaulted Atovullo in Dushanbe. Though there is no proof that attack was related to his professional activities, his friends believe the episode was a warning. Atovullo almost died after an attack by unknown assailants in 1995.

In another case, in January a senior Interior Ministry’s official filed a lawsuit against the Asia-Plus weekly magazine, demanding 1 million somoni ($210,000) in moral compensation for “defaming a public official, his dignity and business reputation.” The suit arose out of an article published by the magazine that examined police torture in Sughd. The case is still pending.

Nargiz Zokirova, director of the Bureau of Human Rights and Rule of Law, a non-profit organization based in Dushanbe, said official harassment often succeeds in silencing Tajik journalists.

“One of the most popular periodicals in the country describes a serious problem, after which it is publically accused of cooperating with terrorists,” Zokirova said, referring to a threat the defense minister made last year when journalists criticized government’s operations in Rasht. “It serves as an example not to be followed by other journalists, a lesson to be learned. But in reality, it is an act of intimidation.”

Observers say the two recent criminal cases expose a double standard. After extensive diplomatic pressure, Usmonov received a rare reduction in charges. Some experts say Usmonov’s association with the BBC was critical in generating international pressure on the government over the case. Independent journalists like Ismoilov, observers add, are far less likely to receive diplomatic assistance, which is effective with Tajikistan’s image-conscious authorities.

“Usmonov has been fortunate in that he can command global attention to his case due to his affiliation with a powerful international network; Ismoilov, obviously, cannot do the same,” wrote blogger “Alpharabius” on neweurasia.net on October 1. “Ismoilov is a soft target, and I suspect the steep sentence he’s facing is intended as either a test of international interest in local reporting and/or as a message to other ‘obscure’ journalists in Tajikistan.”