Mosques have been shuttered and shoppers are stockpiling food. 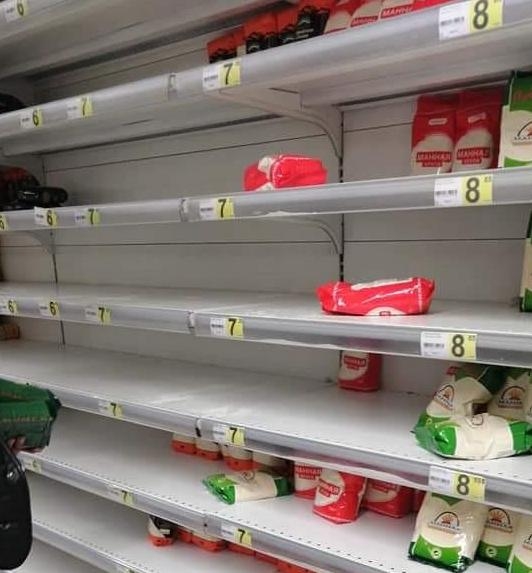 Even though Tajikistan is not yet known to have any confirmed cases of COVID-19, as of March 4, a sense of panic is beginning to spread, leading to the closure of mosques and a run on grocery stores.

Many staple items such as flour, oil and sugar are in short supply or totally sold-out at bazaars and stores in the capital, Dushanbe, as people stock up. What goods do remain have shot up in price. Where a 50-kilogram bag of flour used to cost around 220 somoni ($23), it is now selling for 380 somoni.

A resident of the southern city of Kulob told Eurasianet that riot police were on guard at the bazaar there and stopping shoppers from buying more than two sacks of flour at a time.

The Health Ministry has appealed for calm and tried to tamp down what it said were rumors being spread by people intent on panic.

The government’s extensive history of obfuscation and deception, however, means that the reassurances of officials are viewed with skepticism.

One so-far unfounded line of scuttlebutt doing the rounds in Dushanbe concerns a purported case of the novel coronavirus being registered in the northern city of Khujand. In Khujand, meanwhile, it is rumored that there is a case in Dushanbe.

The Health Ministry’s current guidance is for all people traveling to Tajikistan from China, Japan, South Korea, Iran, Afghanistan and Italy to be placed in quarantine for a period of 14 days. There are currently 320 people in quarantine. On February 29, the Civil Aviation Agency announced that it was denying entrance into the country to citizens from 35 countries, but it reversed that decision on March 3.

Ironically, the panic about COVID-19 only seemed to deepen when the authorities began to adopt measures to reduce the potential risk of transmission.

On March 4, the doors of mosques across the country were shuttered. The Council of Ulemas of the Islamic Center concluded at the end of discussions to adopt a fatwa recommending people to refrain from praying in mosques. Only funerals are exempt.

The Council of Ulemas has also been recruited to relay the advice of health authorities by urging citizens to observe hygiene standards and to consult a doctor if they develop a temperature.

The timing is particularly unfortunate as the opening of a huge mosque – the largest in Central Asia – is scheduled to take place on March 12. A representative of the government’s religious affairs committee told Eurasianet that only a select number of people will be attending that ceremony. Until the coronavirus crisis passes, the mosque will remain unused, the official said.

In another preventative measure, festivities for the holiday of Nowruz, the traditional Persian new year, will not be marked this year.