The move may be intended to keep the banking system solvent. 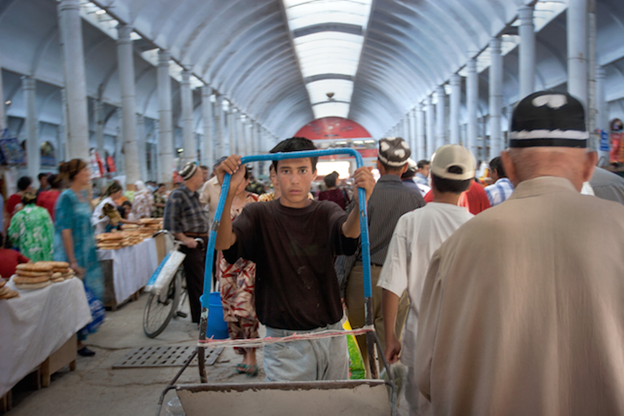 How bazaar: The market is no longer where you go to change money. (Photo: UNDP)

In a measure that looks like the government of Tajikistan’s latest attempt to keep its disastrous banking industry afloat, money transfer companies may be forced to keep billions of dollars in local accounts.

Russian business daily Kommersant reported on August 20 that cash-wiring services, such as Western Union, will from September only be able to effect transactions equivalent to what they have on accounts placed with the National Bank.

The Central Bank in Moscow estimates that Tajik migrant laborers send home around $2.5 billion annually. This is equal to almost one-third of the Tajik economy.

The most commonly used wire companies in Tajikistan are Russia-based Contact, Zolotoya Korona, Migom and Unistream, and also Western Union.

Kommersant describes this new arrangement as a de facto ban on the direct access of the global money transfer system to the Tajik market.

A representative for the National Bank described the initiative to Kommersant as an attempt to “reduce operational risks” and to “support the stability of Tajikistan’s banking system.”

Speaking to RFE/RL, Maria Mikhailova, executive director of the National Association of Payment Services in Russia, said that the proposed system will generate a new source of income for the Tajik National Bank, which will be in a position to charge its own commission on transfers. Money transfer companies will also be unable to provide cast-iron pledges that the money gets to its intended recipient since it will no longer be in charge of the whole chain of operations.

This is not the first time the National Bank has tried to make money off migrant laborers.

In 2016, a requirement was introduced for money being transferred in Russian rubles to be cashed out exclusively in somoni. The initiative was explained, with profound disingenuousness, as an effort to protect the public through the guarantee of a favorable exchange rate.

In reality, however, recipients lost out, on account of the difference between the official and black-market rates. While people used to take their rubles (and dollars) to change down at the bazaar, they are now forced instead to take out the money at an artificially depressed official rate.

In addition to possibly generating revenue for the National Bank, this measure will in effect require money transfer companies to hold considerable financial assets in foreign currency in advance inside Tajikistan – as opposed to making the payments after-the-fact, as happens now. Since Tajikistan engages in a constant struggle to maintain a healthy balance of foreign currency within its financial system, this requirement should at least ensure some degree of predictability.

It needs to be seen if the money transfer companies will be prepared to play along.