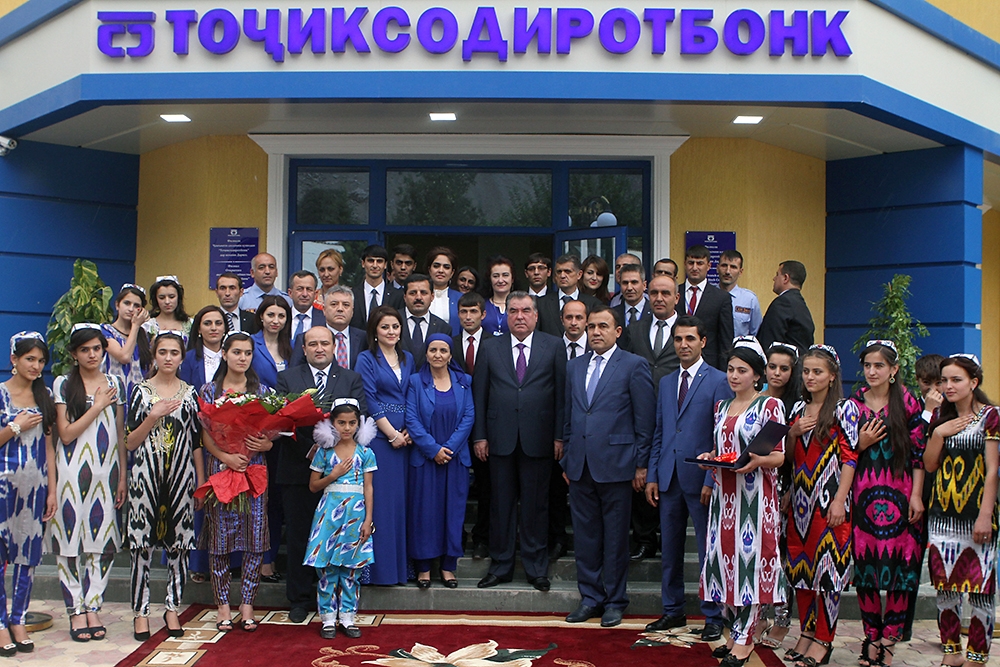 Tajik President Emomali Rahmon (center) attends the ribbon-cutting ceremony of the opening of a new branch office of Tojiksodirotbank in the region of Darvoz in late July 2015. Tojiksodirotbank, Tajikistan’s second-largest private lender, is running out of cash for its depositors to withdraw. (Photo: Tajik Presidential Press Service)

Tajikistan’s banking system is edging closer to the precipice. Panic is spreading among customers at the country’s second-largest private lender, which services swaths of government workers and employees at international organizations.

Tojiksodirotbank’s cash dispensers are running dry. Customers are signing up to waiting lists in their thousands to withdraw whatever money they can. People whose salaries are transferred through the bank have not been paid for three months.

Firuze, a health worker with the state’s National Medical Center, said that when she saw the waiting list for hopeful Tojiksodirotbank depositors awaiting consultations had reached 3,000, she decided to swallow the added fee of withdrawing her savings from another lender.

“I am paid 50 somoni ($6.35) per shift, and I have four shifts per month. When I withdrew money from another bank, I was charged a 35 somoni commission. But nobody listens to our complaints,” she told EurasiaNet.org.

But now rival banks are balking at processing Tojiksodirotbank transactions, further sowing alarm. “My mother hasn’t withdrawn cash for the last five years — she wanted to save up. She asked me to withdraw her money, but I only just about managed to get 500 somoni ($63.5). She’ll have a heart attack if she finds out,” said Sulton, a Dushanbe resident in his thirties.

Because of the prevailing climate of state repression, many people prefer not to be identified for fear of retribution.

On March 14, Tojiksodirotbank issued a statement that attributed interruptions in its services to a switchover in its money-processing system. “Short-term disruptions in the functioning of bank cards are possible. We apologize for the inconvenience,” the statement said.

But signs of an impending banking meltdown have been present for a long time and have been further confirmed by a flurry of engagements with international financial organizations. Warning signs were clear from an International Monetary Fund report issued in February following an exploratory visit to Tajikistan.

“One large bank is already insolvent and another one fails to meet the prudential requirements. Under an adverse scenario the system-wide capital shortfall could be around 5 percent of gross domestic product. Banks are particularly sensitive to credit risk and market [exchange rate] risk, including via indirect credit risk from lending in foreign currency to unhedged borrowers,” the IMF said in its report.

Although the IMF did not mention the banks by name in its report, it is evident they were alluding to Tojiksodirotbank and Agroinvestbank.

Authorities are appealing for help wherever they can get it, as they struggle to restore liquidity to the country’s financial system.

The Financial Times reported in February that Tajikistan is in talks with the IMF to try and secure a $500 million bailout.

Jamoliddin Nurarliev, first deputy chairman of the National Bank and son-in-law of President Emomali Rahmon, told the FT that he believed that sum was “reasonable,” although it is a sum more than three times greater than the $130.2 million that Tajikistan currently owes the IMF.

Last week, the National Bank announced it was in talks with the European Bank for Reconstruction and Development (EBRD) over the state of the banking system. Particular attention was devoted to the role of banks deemed crucial to Tajikistan’s economy, including Tojiksodirotbank.

“The EBRD welcomed Tojiksodirotbank’s new strategy, which is aimed at increasing capitalization, bolstering growth and quality in credit for real sectors of the economy and attracting new foreign institutional investors into the [bank’s] capital structure. The EBRD hopes that success in this process will open avenues for greater cooperation with Tojiksodirotbank,” the National Bank said in a statement.

The authorities already adopted special measures to rescue the country's other major lender, Agroinvestbank, back in November.

Under a government plan, the bank proposes to claw back around 1.56 billion somoni (around $200 million) through the seizure of assets of delinquent debtors. The bank says it has stopped giving out loans worth more than 300 million somoni, and is no longer taking on clients with a negative credit history. In its most desperate cost-cutting measure, Agroinvestbank is scaling back expenses on fuel, furniture and stationery, among other items. The government also proposed cutting staff by 10 to 15 percent.

It is far from certain that any asset-recovery exercise has a good chance of success. Agroinvestbank’s dismal condition appears strongly correlated to an established practice of doling out risky and uncollateralized loans to cotton producers and other agricultural concerns. Some of those loan beneficiaries are known to have links to a Rahmon confidante and current head of Agroinvestbank, Muradali Alimardon.

One of the main bodies charged with asset recovery process is the Agency for State Financial Control and Combating Corruption, which is currently headed by Rahmon’s eldest son and presumed heir, Rustam Emomali.

Even the IMF’s typically bland pronouncements evince anxiety over the issue of directed lending. “Assuming that nearly 50 percent of [Agroinvestbank’s] loan book consists of nonperforming loans due to directed lending, this could have reduced annual gross domestic product growth by as much as one-quarter percentage points. And while the fiscal costs are also hard to measure, restructuring Agroinvestbank could require the injection of public funds in an amount equivalent to around 2.5 percent of gross domestic product,” the IMF said in its recent report.

Beyond recapitalizing at the state’s expense, which does not appear an option given the disastrous state of its finances, IMF solutions for Agroinvestbank include placing the bank under temporary administration, or liquidating it. Compensating depositors would be the responsibility of the government, which is likely in no position at the moment to cover even a fraction of those costs.