Tajikistan: Big Brother Has Eyes in the Classroom and Beyond 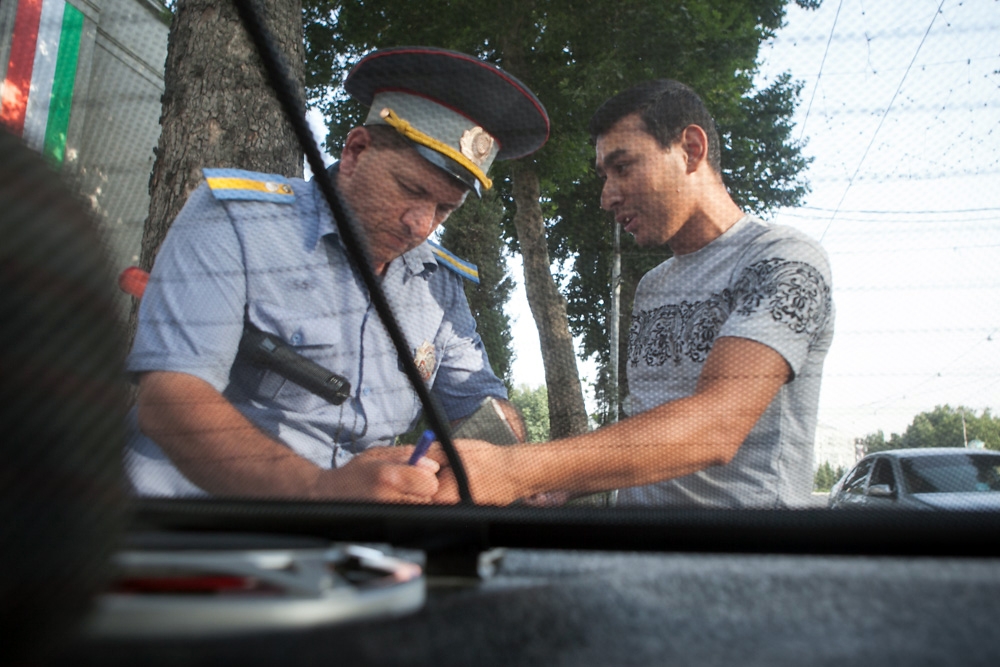 Mehrinisso loves teaching, but finds the closed-circuit surveillance cameras in her classroom unsettling. “It is annoying and disturbing to be watched by somebody all day long,” said the elementary-school teacher in Tajikistan’s capital, Dushanbe.

“District education department inspectors can come to the school principle and ask to see any video—live or recorded. Nobody warns you that your lesson will be watched. Of course, we must be prepared for our lessons, but there is something wrong with this,” the teacher added.

Education officials say the cameras are designed to put an end to petty crime that is rife in Dushanbe’s schools. They don’t help, though, because the quality of the surveillance cameras installed two years ago is poor, says Mehrinisso. Instead, she and other teachers feel they are constantly being spied on.

Closed-circuit television (CCTV) cameras have been popping up all over Dushanbe in recent years, most prominently last autumn on major roads, where they are credited with slowing dangerous drivers. But the rapid spread of surveillance cameras has some rights watchdogs and teachers’ advocates worried Big Brother cannot mind his business.

Last month, Dushanbe Mayor Mahmadsaid Ubaidullaev, who is also the speaker of the upper chamber of Tajikistan’s parliament, instructed officials to expand the city’s video surveillance program into all government offices. The mayor’s spokesman, Shavkat Saidov, told EurasiaNet.org that the measure will boost transparency. “Not only law enforcement agencies, but also civil society organizations will have access to video records upon request,” Saidov said.

While some Tajiks might celebrate anything to stymie the tiresome corruption they face in day-to-day encounters with officials, the cameras in schools remain controversial.

“It is absolutely inadmissible to install CCTV systems in classrooms,” Munira Inoyatova, a former education minister who now directs the Child Rights Center, an NGO, told EurasiaNet.org. “The learning process cannot be controlled this way—with the school principal watching students and their teachers on the television screen in his office. This is not only a violation of privacy, it is a harsh infringement of professional ethics.”

Inoyatova worries this “psychological pressure” is “an attempt to convince children that total control is something normal.”

Outside the classroom, however, the conversation turns to money. Some critics have pointed to the expense of thousands of new CCTV networks, asking just how transparently all this fancy equipment will be acquired. Dismissing concerns the mayor’s friends could financially benefit from the plan, Saidov, the mayor’s spokesman, said each office will determine where to purchase the CCTV sets, which cost several hundred dollars each on the local market.

Some see the purchases as a waste.

“Instead of spending money on video surveillance, it would be better to install more [electronic] payment terminals in the capital” for residents to pay their bills, said Rustem Takhirov, director of an NGO specializing in education reform. “The fewer contacts between public officials and citizens carrying cash, the fewer the chances for corruption.”

Not everyone understands the fuss. The head of a district civil registry office in Dushanbe says he has no problem with the cameras, which his office installed two years ago. “Once in a while, visitors from the city administration or the police check our video records,” the civil servant said. “An honest public servant should not be worried about surveillance. Just a decade ago, people were concerned about video cameras in airports; now, they are installed in many public places, and nobody cares.”

Discussions about the effectiveness of the program have heated up since Dushanbe authorities installed 850 surveillance cameras last fall along main roads and intersections with a $21-million loan from the Export & Import Bank of China. (Some conspiracy-minded residents believe the Chinese cameras allow Beijing to monitor the streets of Dushanbe.)

At the time, local media quoted public officials saying that the initiative was designed to reduce drivers’ contacts with Tajikistan’s notoriously corrupt traffic police. That doesn’t appear to have happened. Instead, in addition to the rapacious traffic inspectors flagging down cars, the number of penalties mailed to drivers’ homes has steadily increased. The traffic police do not publish statistics on the amounts collected or how the money is spent, drawing regular criticism on social networks.

Retired medical doctor Sabohat Sadieva, 74, who moonlights as a taxi driver, complains the cameras do not capture an objective picture of traffic conditions and that there is no mechanism to appeal fines.

“In April, I received a fine – more than 2,000 somoni [about $400] – for ‘numerous traffic offences.’ The traffic police, at first, were reluctant to provide me with any explanation, but I kept insisting and they showed me some blurry videos—extremely poor quality,” Sadieva told EurasiaNet.org, complaining the videos do not make it clear what, if anything, she had done wrong. “Can you imagine how they punished me? That’s my pension for 10 months!”